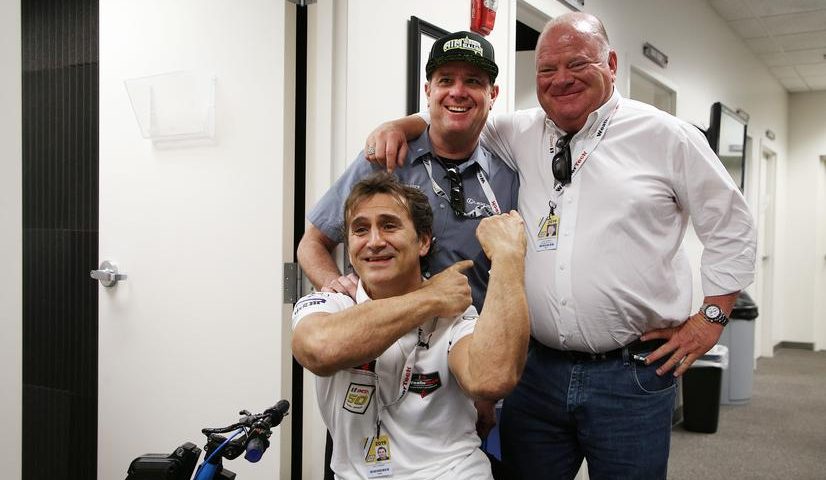 Zanardi to join BMW Team RLL Driver Roster for the Rolex 24 at Daytona.

Woodcliff Lake, N.J. – Dec.19, 2018… Alex Zanardi is perhaps the most enabled man in the world. The loss of his legs in a 2001 Indy Car accident is the most identifying characteristic in the most recent chapters of his life, but is certainly not the most defining characteristic of the rich and, in many ways, enviable life he has led.

A Paralympics multi-time gold medalist and world record setter, the affable Italian has continued to successfully drive racing cars for BMW since 2003. During early testing for his entry in the BMW Team RLL BMW M8 GTE in the 2019 24 Hours At Daytona we sat down with him for a few questions.

How did your relationship begin with BMW?
Roberto Ravaglia – BMW’s first touring car world champion in 1987 – is a good friend of mine and one day he offered me the chance to drive one of his cars. It was quite an experience and after that first step I spoke with the engineers about what it would take to develop a platform that would allow me to once again enjoy myself in competition. Not to say to win immediately as that would be difficult for even an able-bodied driver, but rather start the process that could ultimately allow me to win. At that time Roberto was representing BMW in Italy and along with BMW in Munich made the determination to launch the project to get me back on track. The project has not only encompassed touring car racing, but also GT endurance racing.

After 15 years is your set-up in the M8 GTE as good as it can get or are there plans to improve further it?
Everything can be improved, but making the transition to a brake lever instead of pressing the brake pedal using my prosthetic leg is really about allowing me to stay in the car for a longer period of time. At the Spa 24 in 2015 with Timo (Glock) and Bruno (Spengler) it was not a question of speed, but the effort that was required to use my body to press the pedal consistently over one stint was very difficult and thus the limiting factor in being able to contribute as an endurance co-driver must be able to. After the race, the BMW engineers asked me how they could make me a better endurance driver. I said there were two things, the first would be to be able to get in and out of the car without my prosthetics for better driver changes and that necessitated the second thing – to be able to brake using a lever with my arm. My endurance over the course of a stint is vastly improved and my comfort now allows me to enjoy multiple stints and thus contribute more. I now believe I can represent myself and BMW to the best of my ability.

Based on the continuous improvement you and BMW have done over the years is there now, for example, a button on the steering wheel that will facilitate a “doughnut”?
(Laughing) It would be fantastic to have that sort of issue – to “unplug” all this fantastic machine’s incredible electronics and have fun with it the way I like. I can guarantee that, should we be in such a position on Sunday afternoon at Daytona, I will find a way to torture the M8 and celebrate with a doughnut or two.

In all seriousness, this touches on the most serious part of my driving today. There are switches and buttons that I have to deal with while I am driving. There is almost no point where either of my hands are free enough to focus on only one operation. I may have to push a button while my fingers are opening the throttle with the ring behind the steering wheel, I may have to trigger a downshift while pressing the brake lever. I feel a bit like Jimi Hendrix – I play with both of my hands. I tested the BMW M8 at the BMW Miramas Test Center (France) recently and that is a very tight circuit. I believe that Daytona, with all of the straight sections, will be much more comfortable to drive.

Can you tell us about your charity and its work?
My charity work really began because of the generosity of the American people. After my accident I learned that it is normal for the folks in the United States to donate monies to the injured person and family. I ended up receiving such a significant amount that I felt I must create a foundation so that I could assist others. As my rehabilitation progressed I saw an opportunity in what I was doing and decided to create a project entitled “BIMBINGAMBA” (www.bimbingamba.com). The word means “cool kid” and we help children who have lost a limb and need help with prosthetics and for one reason or another can’t afford or are too far away from knowing that help can be obtained. Up to today we have helped more than 300 kids directly and remember that our help continues with each child as they grow and need larger prosthetics. Most recently, I have started “Objective 3” where we assist people who want active in sports but they don’t have the means. We purchase equipment and loan it in the hope to find at least three future champions who will participate in the next Paralympics games in Tokyo in 2020. I believe that sport, in general, is capable of providing inspiration, but when you are disabled, goals can seem to be very distant. Providing inspiration and the technical tools to achieve in sport makes our reach larger and thereby we can inspire more.

You have been called a hero by many. How do you define hero?
For me, a hero is someone who is both curious of and capable of seeking inspiration, while also giving those around them the curiosity and inspiration to achieve goals that may not be thought to be necessarily at hand at the time. Doing exceptional things usually means attention, but I have learned that is not always the stage you are on that determines the depth of achievement.

What happened to me certainly is not something I would have wished for, but perhaps it was the greatest opportunity I have been given in my life because all of the things I have done and continue to do is because of my condition. It is because of the challenges I face that makes me so proud of what I have been able to achieve. At the end of the day, I am simply a very lucky man.

BMW of North America, LLC has been present in the United States since 1975. Rolls-Royce Motor Cars NA, LLC began distributing vehicles in 2003. The BMW Group in the United States has grown to include marketing, sales, and financial service organizations for the BMW brand of motor vehicles, including motorcycles, the MINI brand, and Rolls-Royce Motor Cars; Designworks, a strategic design consultancy based in California; technology offices in Silicon Valley and Chicago, and various other operations throughout the country. BMW Manufacturing Co., LLC in South Carolina is the BMW Group global center of competence for BMW X models and manufactures the X3, X4, X5, X6 and X7 Sports Activity Vehicles. The BMW Group sales organization is represented in the U.S. through networks of 347 BMW passenger car and BMW Sports Activity Vehicle centers, 153 BMW motorcycle retailers, 127 MINI passenger car dealers, and 37 Rolls-Royce Motor Car dealers. BMW (US) Holding Corp., the BMW Group’s sales headquarters for North America, is located in Woodcliff Lake, New Jersey.