The BMW Group at the 2019 Consumer Electronics Show in Las Vegas. 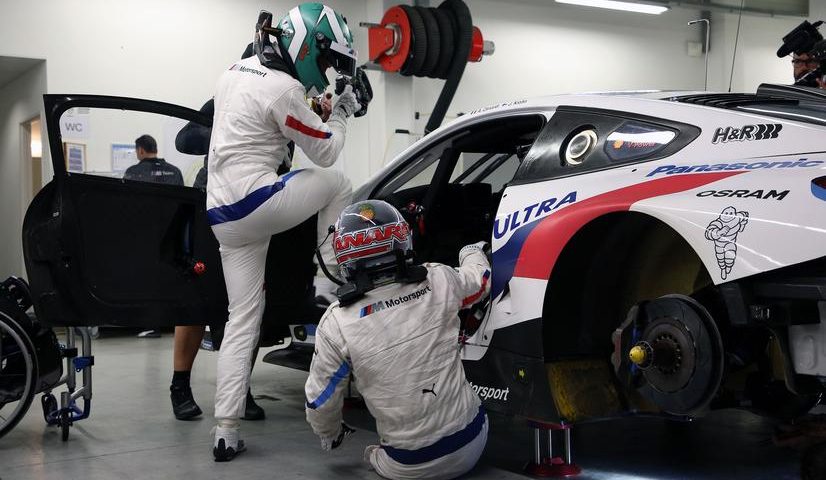 Pure handwork thanks to special throttle and brake system.Extremely complex processes in the turns.Alessandro Zanardi: “Although it may not look that difficult, it is in reality.”

December 20, 2018 , Munich, Germany…The BMW M Motorsport engineers compare him to a drummer, while Alessandro Zanardi (ITA) himself says: “I feel a bit like Jimi Hendrix.” The manner in which the BMW works driver controls the BMW M8 GTE that he will drive during the 24 Hours of Daytona (USA) in January is comparable to a virtuoso performance. Together with BMW M Motorsport, Zanardi has developed a special system that allows him to accelerate with a throttle ring on the steering wheel but also allows him to brake by hand, by using a brake lever.

“When we started to think about what I would need to drive the car longer in distance in an endurance race, the idea was for sure to forget the legs and to do everything with my hands,” explains Zanardi. That was the genesis of a plan to install a brake lever instead of the brake pedal that he pushed by moving his hips and applying pressure through his artificial leg. This lever is mounted on the transmission tunnel and connected to the brake. Zanardi accelerates by using a throttle ring on the steering wheel, primarily with his left hand. He can change gear with a shift paddle on the steering wheel. There is also a switch on the brake lever that allows him to shift down when braking into turns.

The new system endured its first serious test during a race when Zanardi guested in the DTM at Misano (ITA) in August. With success: driving the modified BMW M4 DTM, Zanardi secured a spectacular fifth place in Sunday’s race. Based on the experience gathered in Misano, the BMW M Motorsport engineers and Zanardi then began to optimise the system for the 24 Hours of Daytona (26th/27th January 2019).

“In Misano when I was driving the DTM car, I realized that my right hand is so busy,” explains the Italian driver. “I could not keep my hand long enough onto the steering wheel to push the radio button and talk to the pit. Because at one point the corner was coming so I had to reach for the brake lever. And it’s more important to brake rather than to continue your conversation. And especially in a 24-hour race you have to be able to report to your pit whatever is happening, the state of the car and so on. When you change something so radical and switch to a brake lever, there are a lot of other collateral items that need to be adjusted. The experience from Misano helped us to implement some different solutions, lay-out of some functions, in buttons and triggers and switches in a different way.”

There is also a new horn-like extension on the left-hand side of the steering wheel: “When I put a lot of lock approaching left-hander turns I have difficulties to reach the throttle. This extension will grant me the possibility to operate the throttle if I have to, leaning up against something solid which is been shaped in this particular way.”

All that helps Zanardi to drive the #24 BMW M8 GTE from the BMW Team RLL around the circuit like clockwork at the 24-hour race in Daytona. However, he emphasises that: “Although it may not look that difficult, it is in reality. There are switches and buttons that I have to deal with while I am driving. There is almost no point where either of my hands are free enough to focus on only one operation. I may have to push a button while my fingers are opening the throttle with the ring behind the steering wheel, I may have to trigger a downshift while pressing the brake lever. I feel a bit like Jimi Hendrix: I play with both of my hands.”

Zanardi has to complete – and be able to coordinate – extremely complex processes in every turn: “When you press the lever with your hand, on the same time you have to have a different feel with your fingers. So your muscles are doing one thing, and other muscles are doing another thing. This is incredibly complicated. Probably, it will be easier for a guitar player, someone who is used to use his hands in a different way. And while I am doing this, my head is basically focused on applying the right amount of pressure but I am kind flipping the throttle as I need to feel a little bit of power but at the same time I am steering with the left hand. So every single muscle is dedicated to handle a particular operation and synchronise this all. And then I have to change something if something goes wrong –  if the car goes sideways or you go a little deep into the corner and you lock the front wheel. Then I have to reduce a little bit the pressure and maybe downshift a second longer. Well, at times it gets complicated.”

Alessandro Zanardi – the virtuoso in the cockpit of the BMW M8 GTE is ready for the 24 Hours of Daytona with BMW M Motorsport and the BMW Team RLL.

Note to editors:
We will publish more features about various topics in the weeks leading up to Zanardi’s appearance at Daytona.