#24 BMW M8 GTE Will Start the IMSA Finale from Second Row on the Grid – Eng Comes Third in Qualifying. 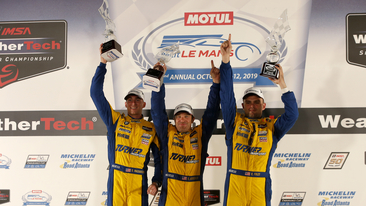 It was the second win of the season for the Turner squad. Auberlen now has 60 victories in North American sports car racing under his belt to equal Scott Pruett (USA). No other drivers have amassed more visits to the top step of the podium. Auberlen and Foley finished the season in second overall in the GTD drivers’ standings.

After starting from eighth on the grid, the #25 BMW M8 GTE consequently worked its way through the field over the course of the race. On lap 236, Blomqvist took the GTLM lead for the first time, and kept battling it out at the front end of the pack with his team-mates until the very end. Blomqvist, De Phillippi and Herta ultimately claimed BMW Team RLL’s fourth podium result of the year. The team’s biggest success of the season was victory at the Rolex 24 at Daytona (USA), which had also been secured by car no. 25.

An oil leak in the early stages of the race caused a long pit stop for the #24 BMW M8 GTE, driven by Eng, Edwards and Krohn. The big gap of several laps couldn’t be made up over the course of the race.

In the GTLM drivers’ standings, De Phillippi is the best-placed BMW representative with 293 points in sixth place. BMW finished the season in fourth in the manufacturers’ standings with 327 points.

Reactions to the Petit Le Mans at Road Atlanta.

Jens Marquardt (BMW Group Motorsport Director): “This was a successful season finale for us – in GTLM and in GTD. What a dramatic finish by Bill Auberlen. On the very last lap he secured GTD victory for Turner Motorsport with the BMW M6 GT3. Congratulations also go to his team-mates Robby Foley and Dillon Machavern. No other driver has scored more wins in North American sports car racing than Bill – his 60th win on his 51st birthday. This is amazing. It’s unbelievable to see what kind of performances Bill continues to deliver. In the GTLM class, the IMSA season ended in the same fashion as it had kicked off: with BMW drivers on the podium. We couldn’t score another win at Road Atlanta, but Connor De Phillippi, Tom Blomqvist and Colton Herta delivered a strong fight and were rewarded with third place. Congratulations to the trio of drivers and the BMW Team RLL crew. This was a positive finish to a season with several highs and lows. It’s a pity that our second BMW M8 GTE lost ground due to an early technical issue. A lot more would have been possible. Our GTLM triumph in Daytona was our season highlight. Now we will put in some hard work over the winter to make sure that we will be as strong there next year as in 2019. In addition, we want to fight for top positions on a more regular basis.”

Bill Auberlen (#96 BMW M6 GT3, winner): “This was an unbelievable race. I just love Road Atlanta. Victory on my 51st birthday, second in the championship and now tied with Scott Pruett on 60 wins: this is crazy. I have won here for the fourth time. In 2020 I will try to do it again. I want to pass Scott in the winners’ list.”

Robby Foley (#96 BMW M6 GT3, winner): “We started from the back, which is never ideal. Then you have to manage the risks you take. Still I was able to gain ground on my first stint and moved up to fourth. After that we were running very consistently. It was close at the end, but it all worked out. Thank you to Turner Motorsport. They gave us a great car.”

Dillon Machavern (#96 BMW M6 GT3, winner): “My stints were not really eventful, to be honest. Robby did a great race in the beginning, Bill did a great job at the end. The Turner boys did a perfect job. That’s the great thing about these long races. You always have a chance to come back. It’s an awesome day.”

Connor De Phillippi (#25 BMW M8 GTE, third place): “We started the season with a win, and we end the season on the podium. It was a hard-fought podium this weekend. The race had highs and lows, Tom drove a hell of a last stint. The right car was in the car at the right time. I couldn’t be happier.”

Tom Blomqvist (#25 BMW M8 GTE, third place): “It was all or nothing in the end. And we made it. I’m really happy now. This event was just awesome. The last stint was pretty mental. It’s just great I could do this for the guys and everybody in the team.”

Colton Herta (#25 BMW M8 GTE, third place): “Everybody did such a great job. We had a good handling in the car, and it really came alive in the night when it had to. We didn’t quite have the pace at the beginning, but we ended the race right. I’m happy to end my racing season on the podium.”

John Edwards (#24 BMW M8 GTE, ninth place): “This is a very disappointing way to end our 2019 season. We did have some good races and a good pace, even today. But for us it just didn’t come together. Hopefully we can avoid these problems next year and fight for the championship in 2020.”

Jesse Krohn (#24 BMW M8 GTE, ninth place): “Unfortunately we didn’t have much luck today. We had problem with the car and dropped 20 laps back. Then it was just a matter of bringing the car home. Today wasn’t our day.”

Philipp Eng (#24 BMW M8 GTE, ninth place): “First of all I’m happy that our sister car got the podium. Unfortunately we were unlucky very early in the race which ended all our hopes for a good result. That’s a big shame, because we got a really strong race car today. Once we got into a rhythm, we were running really strong. I enjoyed my trip to the US again. It’s always cool to be with the guys over here.”