BMW Group Presents: 200 Women Who Will Change the Way You See the World. 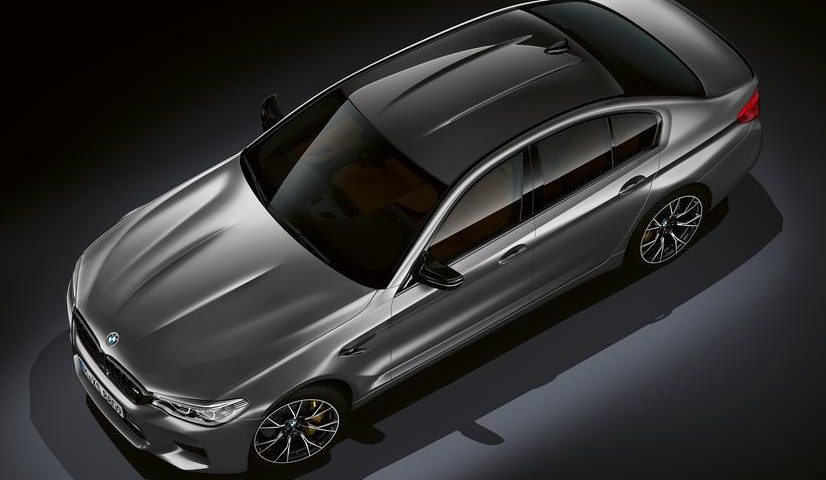 A history of success: Competition, the ultimate in M performance.
The launch of the new 2019 BMW M5 Competition Sedan, along with the recently announced M2 Competition Coupe, marks the creation of a new product category within BMW M GmbH’s line-up, with the most powerful variants of its high-performance cars to be available in the future as standalone Competition models. This restructuring of the M portfolio has been prompted by the strong popularity of the various model-specific M Competition packages. M Competition packages were first offered for the predecessor to the current BMW M5 and are currently available for the BMW M4 Coupe, BMW M4 Convertible and BMW M3 Sedan. Some 40 percent of all previous-generation BMW M5 models sold worldwide were equipped with the M Competition package. The line-up’s crowning glory came in the form of the BMW M5 Competition Edition, which was capped at just 200 units and boasted a power output of 600 hp along with an ultra-exclusive standard specification.

Exclusive design features.
Light-alloy wheels specially developed for the new 2019 BMW M5 Competition Sedan play a part in its exceptional performance capabilities and add to the model’s exclusive looks. Other distinctive design features of the Competition include high-gloss black finishers on the door handles, mirror bases and mirror triangles, plus the exterior mirror caps and the mesh of the signature M gills in the front flanks. High-gloss Shadow Line trim is featured on the door window surrounds and B-pillar trim.

The kidney grille’s surrounds feature high-gloss black accenting as does the detailing for the rear bumper cover. This forms a color-coordinated composition with the tailpipes in black chrome. Both the rear spoiler and “M5” boot lid logo – which gains “Competition” lettering – are also finished in high-gloss black.

Moving inside the new 2019 BMW M5 Competition, black seat belts with a striped pattern in BMW M GmbH colors and floor mats with model-specific piping plus an “M5” logo provide the finishing touches. A distinctive “M Competition” graphic appears in the instrument cluster to greet the driver as vehicle is starting up.

Engine: more power and performance.
The emotion-packed driving experience that defines the new BMW M5 Competition stems from the unique performance characteristics of its engine. The high-revving power unit with M TwinPower Turbo technology developed for the standard BMW M5 has undergone meticulous retuning to optimise torque and power delivery.

The new 2019 BMW M5 Competition comes with a model-specific M Sport exhaust system. This version of the flap-controlled, twin-pipe exhaust system produces an extremely distinctive sound with a sportier tone – especially when the engine is pushed hard and at high revs. The various engine modes, which can be selected at the push of a button, include changes to the sound emitted by the exhaust system. The acoustic profile activated by Sport Plus mode, for example, is even more purposeful in nature. The driver can vary the engine’s aural character using the M Sound Control button, enabling a quick switch to a far more understated sound. The M Sport exhaust system makes a great visual impression too, thanks to the black chrome embellishers of the tailpipe pairs nestled neatly into the left and right of the rear apron.

Specially designed engine mounts optimize responsiveness and cornering characteristics.
The new 2019 BMW M5 Competition features model-specific engine mounts, which have a noticeable impact on its performance abilities. The engine mounts have modified characteristics and feature an increased spring rate – from the 3,312 lbs/in. of the standard-spec new BMW M5 to 5,139 lbs/in. The drive unit’s firmer connection to the vehicle’s structure results in a more direct engine response resulting in a more immediate transfer of power to the drivetrain. The car turns into corners with noticeably greater directness and precision due to the mountings’ stiffer characteristics.

Power transfer via eight-speed M Steptronic transmission and M xDrive.
The task of transferring the new 2019 BMW M5 Competition’s engine power to the wheels is handled by the eight-speed M Steptronic transmission, whose design and functionality have been carefully designed for extreme performance. Incredibly short shift times and swift, precise responses to every nudge of the accelerator ensure that the engine’s capabilities are instantly translated into action. Three different modes offering a choice of efficient, sporty or ultra-high performance driving can be activated using the Drivelogic rocker switch on the gear selector. Manual gear selections are possible with either the selector lever or the shift paddles on the steering wheel. A specially designed transmission oil cooler keeps the transmission operating within the desired temperature range, even when the car is being pushed to the limit on the track.

The M xDrive system, which made its debut in the standard version of the new 2019 BMW M5, already has all the required tools to deliver scintillating performance. The intelligent all-wheel-drive technology is capable of effortlessly directing the BMW M5 Competition’s greater power to the road in and generating just enough extra traction to achieve acceleration times worthy of a super-sports car. The centrally controlled interaction between M xDrive and the Active M Differential is largely responsible for channelling the engine’s remarkable output to the car’s wheels without any loss of power en route. The engine’s torque is distributed between the front and rear wheels by the transfer case’s fully variable, electronically controlled multi-plate clutch, before the Active M Differential splits it again as needed between the two rear wheels.

The rear-wheel bias of the M xDrive system contributes to the tremendous agility of the high-performance sedan. The system makes it possible to program in an individual power distribution configuration, and the driver is able to influence both the way the DSC (Dynamic Stability Control) works and how drive torque is distributed between the front and rear axles – all at the press of a button. As an alternative to the basic setting, the new BMW M5 and M5 Competition both offer a choice of M Dynamic mode offering greater slip angles and particularly fun handling, as well as three additional modes with DSC deactivated that are geared towards track driving. Besides the 4WD and 4WD Sport modes, there is the option of pure rear-wheel drive (2WD), which allows experienced and skilled drivers to revel in the experience offered by past generations of the BMW M5 – i.e. handling in its purest form, with no control system intervention.

Model Specific chassis tuning for the ultimate precision and performance.
Like every BMW M car, the new 2019 BMW M5 Competition is equipped with chassis technology matched to the performance characteristics of its engine. The modifications ensure precisely controllable handling at all times, even in extremely dynamic driving situations. This is down to the M-specific kinematic and elastokinematic properties of the high-performance sedan’s double-wishbone front suspension and five-link rear suspension. They result in neutral steering behaviour and a linear build-up of lateral force up to the car’s dynamic limits. An M-specific version of the Variable Damper Control system is fitted, the Comfort, Sport and Sport Plus modes selectable at the press of a button activating different damper settings. The electromechanical M Servotronic steering conveys a sense of supreme accuracy on turn-in, while delivering clear feedback to the driver.

The 2019 M5 Competition ride height has been lowered by seven millimetres compared to the M5 Sedan, with additional, model-specific chassis tuning, featuring tweaks to the springs and dampers. Increased negative camber at the front axle enhances the car’s ability to absorb lateral forces through high-speed corners. Fitting the toe links with ball joints instead of rubber mounts has resulted in more precise wheel guidance at the rear axle. The spring rate of the rear anti-roll bar is firmer, causing the body roll that occurs through high-speed corners to be distributed with a pronounced rear bias.

The front axle of the new 2019 BMW M5 Competition is equipped with a redesigned mounting for the anti-roll bar. Making the springs at the front and rear axles ten per cent stiffer than the standard version of the new BMW M5 produces a firmer ride and has a positive impact on steering response. Shorter auxiliary springs reduce fluctuation in wheel loads, as does the unique tuning for the damper hydraulics. The athletic character of the new 2019 BMW M5 Competition really comes out with the three modes selectable at the touch of a button. This means the direct connection of chassis to driveline can also be clearly felt in Comfort mode. Selecting Sport mode activates the damper settings perfected for harsher tarmac and curbing of a track like Nürburgring’s Nordschleife circuit. Sport Plus lends itself to the smoother pavement and curbing of grand prix circuits.

The ultimate in braking and grip.
The outstanding stopping power of the new 2019 BMW M5 Competition is provided by low-weight M compound brakes, featuring six-piston fixed callipers and perforated, inner-vented brake discs at the front wheels and single-piston floating callipers with integrated parking brake at the rear. The optional M carbon-ceramic brakes, distinguished by their even lower weight, offer greater extreme thermal stability and excellent resistance to wear.

Standard specification for the new 2019 BMW M5 Competition includes exclusive M light-alloy wheels sporting a Y-spoke design in a bi-colour finish. The 20-inch forged wheels are shod with tires measuring 275/35 R 20 at the front and 285/35 R 20 at the rear.

BMW Group in America
BMW of North America, LLC has been present in the United States since 1975. Rolls-Royce Motor Cars NA, LLC began distributing vehicles in 2003. The BMW Group in the United States has grown to include marketing, sales, and financial service organizations for the BMW brand of motor vehicles, including motorcycles, the MINI brand, and Rolls-Royce Motor Cars; Designworks, a strategic design consultancy based in California; technology offices in Silicon Valley and Chicago, and various other operations throughout the country. BMW Manufacturing Co., LLC in South Carolina is part of BMW Group’s global manufacturing network and is the manufacturing plant for all X5 and X3 Sports Activity Vehicles and X6 and X4 Sports Activity Coupes. The BMW Group sales organization is represented in the U.S. through networks of 345 BMW passenger car and BMW Sports Activity Vehicle centers, 153 BMW motorcycle retailers, 127 MINI passenger car dealers, and 36 Rolls-Royce Motor Car dealers. BMW (US) Holding Corp., the BMW Group’s sales headquarters for North America, is located in Woodcliff Lake, New Jersey.