The BMW i Vision Dynamics. A new form of electrifying driving pleasure 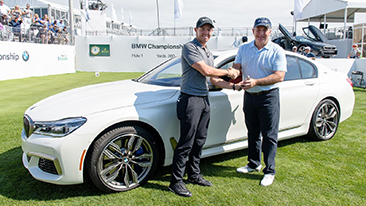 The BMW Championship will be played Thursday, September 14th through Sunday, September 17th. McIIroy is among the top 70 players in the world competing in the penultimate event of the PGA TOUR Playoffs for the FedExCup. The field also includes the winners of all four of this year’s major championships – and the world’s number one ranked golfer, winner of the 2016 BMW Championship, Dustin Johnson.

Keeping with tradition, BMW will also provide a full, four-year tuition and housing grant through the Evans Scholars Foundation in the name of the first PGA TOUR player to record a hole-in-one during the 2017 BMW Championship.

TOUR Players will also have the opportunity to earn some significant prizes by recording a hole-in-one on either the 11th or 17th holes. The first player to record a hole-in-one on the 11th hole will receive the hybrid electric BMW i8 sports car. The first player to do so on the 17th hole will receive the BMW M760i xDrive, the perfect combination of BMW performance and luxury.

Additional activities and benefits at the 2017 BMW Championship include:

For updates during the 2017 BMW Championship, follow the conversation with: