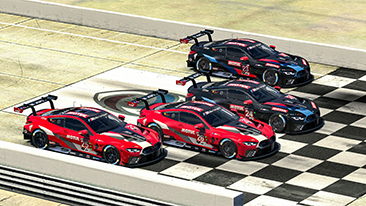 While all real-world motor racing events were cancelled, BMWMotorsport will be represented in three big sim events on Saturday.Nürburgring Endurance Series, IMSA Super Sebring and THERACE All-Stars Esports Battle are on the agenda.Ten BMW drivers will be racing from their homes.

Munich, Germany- March 20, 2020… Real-world motorsports events all over the world might be cancelled or postponed, but that doesn’t mean that there’s no racing going on: Within the vast BMW Motorsport SIM Racing programme, a total of ten BMW drivers will fight for glory on Saturday.

The first-ever virtual round of the Nürburgring Endurance Series will kick off proceedings at 13:00hrs (CET) with a four-hour race in Green Hell. Among the more than 50 cars in the field that are split into four classes, there will be two BMW Z4 GT3s driven by BMW drivers. Jens Klingmann and Martin Tomczyk (both GER) will share driving duties as well as two members of the new BMW Junior Team, Dan Harper (GBR) and Neil Verhagen (USA). The race will be broadcast in livestream at www.vln.de.

After this race, it’s time to visit the YouTube channel of THE RACE in order to follow the second edition of the All-Star Esports Battle. Up to 60 pro racers will accept the challenge of sim racers, in order to determine the overall winner in the Grand Final going green at 20:00hrs (CET). BMW i Andretti Motorsport driver Maximilian Günther (GER) will return to this competition, after finishing second behind Max Verstappen (NED) in the very first Pro Race held last weekend. He will be joined by BMW DTM driver Philipp Eng (AUT), who makes his debut in THE RACE All-Star Esports Battle.

Four MOTUL BMW M8 GTE cars will line up on the grid of the 90-minute IMSA Super Sebring race. With the classic Sebring 12 Hours (USA) being postponed, IMSA fans will now be treated with some gripping GTE action on the iRacing sim platform. BMW Team RLL’s Bruno Spengler (CAN), Jesse Krohn (FIN) and Colton Herta (USA) as well as Nick Catsburg (NED) will take to the track at the wheel of two red and two black BMW M8 GTE machines. Joining them on the grid will be BMW M Customer Racing driver Robby Foley (USA), who drives for Turner Motorsport in the IMSA WeatherTech SportsCar Championship. In total, more than 20 BMW M8 GTE have registered for the race. As well as the aforementioned BMW drivers, the other big names taking their place behind the wheel include BMW M Customer Racing driver Tyler Cooke (USA), Sebastian Priaulx (GBR), son of former BMW works driver and world touring car champion Andy Priaulx (GBR) and former Formula 1 driver Felipe Nasr (BRA). The race will start at 14:30 (EST) and broadcast on the iRacing eSports Network on YouTube and Twitch.

Statements on the “Super Sim Saturday”.

Maximilian Günther: “I am really looking forward to the next all-star race on Saturday. Last weekend was my first taste of eSports racing, and I can say without any doubt that I am hungry for more.”

Philipp Eng: “I am very much looking forward to taking to the virtual racetrack with so many of my fellow professional racing drivers and sim racers. At the moment, the simulator is our only opportunity to go racing. I will prepare as well as possible and hope to be up there at the front of the field.”

Colton Herta (BMW Team Black, #23 MOTUL BMW M8 GTE): “I’m looking forward to racing this weekend. It’s always exciting to go up against everyone no matter the circumstances. Like many things right now racing is coming to a stop at the minute so I think this will help propel interest and hopefully give people an outlet to watch some form of Motorsport.”

Jesse Krohn (BMW Team Black, #24 MOTUL BMW M8 GTE): “I am very excited to race against my IMSA competitiors and be a part of something new. I’m not sure something like this has been put together by a major championship.”

Bruno Spengler (BMW Team Red, #25 MOTUL BMW M8 GTE): “Sim racing is an important tool that allows a driver to stay fit. And now, while we are all staying safe we can keep on doing our job. I am pleased to be a part of this event and look to put on a good show along with my BMW colleagues.”

Nick Catsburg (BMW Team Red, #26 MOTUL BMW M8 GTE): “This weekend’s SuperSebring race is going to be awesome. Everyone i currently spending more time on the simulator and I would like to thank IMSA for this initiative.”

Jens Klingmann (#112 BMW Z4 GT3): “I am actually new to sim racing and am naturally a little nervous about my very first race in the simulator. It is fascinating to see how sim racing has developed, particularly in recent years. It is a fantastic alternative to real motor racing for us, particularly at the moment. I can hardly wait to make my debut alongside my team-mate Martin Tomczyk – and on the Nordschleife, of all places.”

Martin Tomczyk (#112 BMW Z4 GT3): “It is obviously a shame for us racing drivers to be at home instead of at the racetrack at the moment. As such, I am all the more delighted that sim racing is offering us the opportunity to still go racing. Personally, I am spending a lot of time in the simulator at the moment. I think holding the season-opener on the Nordschleife in a virtual environment, and in line with the original regulations, is a great idea. I am sure there will be a lot of well-known names on the grid.”

Neil Verhagen (#113 BMW Z4 GT3): “It is obviously a shame that we are unable to make our debut on the Nordschleife with the BMW Junior Team this weekend. However, instead of that I now have the opportunity to take part in this race alongside Dan. I am sure I can learn a lot about both sim racing and the Nordschleife.”

Dan Harper (#113 BMW Z4 GT3): “We should actually have been making our debut on the Nordschleife this weekend. Unfortunately, that is no longer possible. However, I am looking forward to the virtual race. We are racers and want to be quick in the simulator too. As such, we will get in as much practice as possible before the race on Saturday.”