BMW Group Electrifies the Los Angeles Auto Show with a to-be-Announced World Debut and the North American Premieres of the BMW i Vision Dynamics, MINI Electric Concept, and BMW i3s 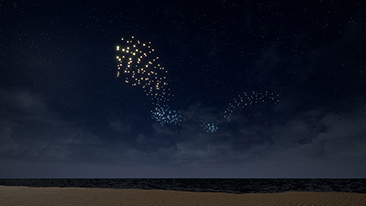 BMW as official partner of Art Basel in Miami Beach 2017.

Miami Beach-  November 21, 2017… During this year´s Art Basel in Miami Beach the BMW Group will present two major cultural collaborations: The world premiere of “FRANCHISE FREEDOM – a flying sculpture by Studio Drift in partnership with BMW” created by Amsterdam based artists Lonneke Gordijn and Ralph Nauta. After sunset, 300 illuminated drones will simulate a flock of birds above the ocean and beach. In addition, the new work of BMW Art Journey winner Max Hooper Schneider will be on display at the BMW Lounge.

Studio Drift’s new work during Art Basel in Miami Beach
“FRANCHISE FREEDOM – a flying sculpture by Studio Drift in partnership with BMW” is a performative artwork at the interface between technology, science, and art. An autonomous flying swarm of 300 drones, each equipped with a light source, will imitate the natural phenomenon of a flock on December 6, 9 PM on the beach of Miami above the sea between 32nd and 33rd Street off Collins Avenue behind the Faena Hotel Miami Beach. This is the first time that a flock on this scale is presented by machines working with decentralized algorithms. Inspired by the spectacle of starlings clustering together in massive flocks and exposing the tension between individual freedom and safety in numbers, Studio Drift questions the delicate balance between the group and the individual. Studio Drift’s first research on this project dates back to 2007. To create “FRANCHISE FREEDOM”, Studio Drift studied the natural flight patterns of starlings and translated them into software that were specially developed and embedded in the drones.

BMW has a 50-year global track record of recognizing and enabling talent in the arts. The company makes artistic visions come true and honors the full creative freedom of any artist or institution they collaborate with. When Studio Drift sought a dialogue with BMW in regard to their ambitious project, the company, as long-term partner of Art Basel, could not pass on the challenge. For the period of over half a year, discussions ensued between BMW and Studio Drift – just as they did with artists like Jeff Koons, Olafur Eliasson, and Cao Fei beforehand.

“We were impressed by the courage of BMW to get involved here, as an artwork of this scope and scale has never even been tested before. They believed in our idea because they fully comprehend how complicated and intricate those innovative processes are,” says Lonneke Gordijn, co-founder of Studio Drift, Amsterdam.

At its core, BMW is at the forefront of technological innovation, which is why “Franchise Freedom – a flying sculpture by Studio Drift in partnership with BMW” holds such a strong appeal. Making the impossible possible is what both, the company and artists, such as Lonneke Gordijn and Ralph Nauta, strive for. Says Hildegard Wortmann, Senior Vice President Brand BMW: “Studio Drift and BMW both subscribe to a symbiosis of innovation and beauty. I congratulate Lonneke Gordijn and Ralph Nauta for the perseverance in turning their endeavor into a reality. ‘FRANCHISE FREEDOM’ is both a technological wonder and an aesthetic experience to behold.”

In celebration of Art Basel in Miami Beach 2017, Studio Drift, BMW, Future\Pace as well as Faena will premiere “FRANCHISE FREEDOM”. The private inaugural performance and event will take place on the evening of Wednesday, December 6, on the beach of Faena Hotel with additional performances, weather permitting, throughout the week, time and date will be shared on Instagram by Studio Drift @studio.drift and by BMW on Facebook #bmwgroupculture. The drones will be visible from a large distance.

While Studio Drift is presenting their latest artwork at the interface between science, art and technology, Bayerische Motoren Werke will have one of their latest masterpiece on site: the BMW Concept 8 Series will be on display for guests to see it up close in the Faena Beach Dome on December 6, 2017. The study car will serve as a taster of a forthcoming BMW model – The BMW Concept 8 Series stands for new design ideas and form-building techniques, representing the pinnacle of sports performance and exclusivity at BMW and slated for launch in 2018 as part of the biggest model offensive in the company’s history.

BMW Art Journey at Art Basel in Miami Beach
BMW Art Journey winner Max Hooper Schneider will present his new work at the BMW Lounge at Art Basel in Miami Beach 2017, made in response to his recently completed maritime journey to explore coral reefs around the globe. His journey investigated coral reef systems from the Bikini Atoll to the Fukushima disaster “reef” in Japan, from Lake Baikal in Russia to the coast of Madagascar. Importantly, each reef system has been compromised by its contact with humans, and each one reveals a specific aspect of how this interaction has occurred, as well as how human and non-human agents have acted over time to remediate the damage. Together, the reefs tell a story of death and resilience, corruption and rebirth.

The BMW Art Journey is a global collaboration between Art Basel and BMW, created to recognize and support emerging artists worldwide. This unique award is open to artists who are exhibiting in the Discoveries and Positions sectors in the Hong Kong and Miami Beach shows of Art Basel, respectively. Two judging panels comprised of internationally renowned experts meet first to select a shortlist of three artists from the sector, who are then invited to submit proposals for a journey aimed to further develop their ideas and artistic work. The jury reconvenes to choose a winner from the three proposals.

The next BMW Art Journey shortlist will be announced on December 7 at 5:30 PM at the BMW Lounge at the 2017 edition of Art Basel in Miami Beach.

BMW has supported Art Basel in Miami Beach as a long-term partner and is again providing the VIP shuttle service. BMW is also global partner of the international Art Basel shows in Basel and Hong Kong.

For further information about the artists and the project, please visit:
http://bmw-art-journey.com

About Studio Drift
Based in Amsterdam, Studio Drift was established in 2006 by Lonneke Gordijn (b. 1980, Alkmaar, Netherlands) and Ralph Nauta (b. 1978, Swindon, United Kingdom), who attended the Design Academy Eindhoven together. Studio Drift explores the relationship between nature, technology, and humankind in site-specific installations and interactive sculptures. Studio Drift draws their inspiration from nature, both formally and philosophically, while their creative process is fuelled by innovative technologies and methods. Their groundbreaking work comes to life through ongoing collaborations with scientists, university departments, and research facilities, computer programmers and engineers. Their practice is a testament to the cross-pollination between the technically advanced and the aesthetically beautiful, permeated with an awareness of future potential.

About Future\Pace
Studio Drift is represented by Pace Gallery, taking part in the gallery’s Future\Pace program. Established by Mollie Dent-Brocklehurst, Pace Gallery, and Mark Davy, founder of Futurecity, Future\Pace offers a pioneering approach to commissioning art ‘in the public realm’. The partnership builds on the expansive and important histories of both Pace and Futurecity, bridging Pace’s extensive global resources with Futurecity’s innovative approach to developing large scale commissions for artists in the public realm. Future\Pace develops partnerships and opportunities with an international group of artists including Studio Drift, Kohei Nawa, Carsten Nicolai, Random International, Michal Rovner, Studio Swine, teamLab, and Leo Villareal articulating a focus on art that transforms conventions of public sculpture by reaching into the digital sphere.

About Max Hooper Schneider
Max Hooper Schneider (born Los Angeles, CA 1982) graduated from Harvard University in 2011 with a master’s degree in landscape architecture. The foregrounding of material technologies and biological systems within this field continues to inform his artistic practice. Hooper Schneider’s work develops and explores the aesthetics of succession through the creation of worlds that materialize and dramatize nature in diverse ways with nature conceived as a process of ceaseless change and morphogenic modulation. The resultant work voids the difference between the natural and the artificial, challenges conventional systems of classification, and suggests a worldview that strives to dislocate humans from their assumed position of centrality and superiority as knowers and actors in the world. Hooper Schneider lives and works in Los Angeles.

About Art Basel
Founded in 1970 by gallerists from Basel, Art Basel today stages the world’s premier art shows for Modern and contemporary art, sited in Basel, Miami Beach and Hong Kong. Defined by its host city and region, each show is unique, which is reflected in its participating galleries, artworks presented, and the content of parallel programming produced in collaboration with local institutions for each edition. Art Basel’s engagement has expanded beyond art fairs through a number of new initiatives. In 2014, Art Basel launched its Crowd funding Initiative, in collaboration with Kickstarter. This initiative presents jury-selected art projects to potential benefactors, which include Art Basel’s vibrant audience and the Kickstarter community. The initiative has catalyzed much-needed support for outstanding non-commercial art projects worldwide and so far has helped pledge over $2 million to creative projects around the world. For Art Basel Cities, launched in 2016, Art Basel is working with selected partner cities to develop vibrant and content-driven programs specific to the individual city. Connecting them to the global art world through Art Basel’s expertise and network, Art Basel Cities supports its partners to develop their unique cultural landscape. For further information, please visit artbasel.com.

About BMW Group’s Cultural Commitment
For almost 50 years now, the BMW Group has initiated and engaged in over 100 cultural cooperations worldwide. The company places the main focus of its long-term commitment on contemporary and modern art, classical music and jazz as well as architecture and design. In 1972, three large-scale paintings were created by the artist Gerhard Richter specifically for the foyer of the BMW Group’s Munich headquarters. Since then, artists such as Andy Warhol, Jeff Koons, Daniel Barenboim, Jonas Kaufmann and architect Zaha Hadid have co-operated with BMW. In 2016 and 2017, female artist Cao Fei from China and American John Baldessari created the next two vehicles for the BMW Art Car Collection. Besides co-initiatives, such as BMW Tate Live, the BMW Art Journey and the “Opera for All” concerts in Berlin, Munich and London, the company also partners with leading museums and art fairs as well as orchestras and opera houses around the world. The BMW Group takes absolute creative freedom in all its cultural activities for granted – as this is as essential for producing groundbreaking artistic work as it is for major innovations in a successful business.