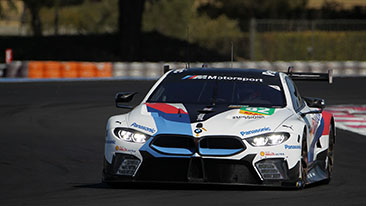 Munich, Germany- April 30, 2018… FIA WEC, DTM and the IMSA series: Fans of BMW M Motorsport can enjoy action galore this weekend. The new BMW M8 GTE is set for its race debut in the FIA World Endurance Championship (FIA WEC) at Spa-Francorchamps (BEL). This is also the dress rehearsal for the highlight of the season, the 24 Hours of Le Mans (FRA) in June. Hockenheim (GER) traditionally hosts the opening round of the DTM, with the BMW teams lining up for races one and two of the 2018 season on Saturday and Sunday (5th and 6th May). In the USA, BMW Team RLL is at the “Mid-Ohio Sports Car Course” (USA) with the IMSA WeatherTech SportsCar Championship.

“We are looking forward to an exciting and hopefully successful mega race weekend,” said BMW Motorsport Director Jens Marquardt. “We get down to business in the FIA WEC for the first time. This is the pinnacle of endurance racing. We are looking forward to being a part of it with our new BMW M8 GTE. At the same time, our teams and drivers in the DTM will be battling for the first points of the year. Since we returned to the series in 2012, we have won eight titles – and our clear goal is to add to this collection with the BMW M4 DTM this year. In the IMSA WeatherTech SportsCar Championship, BMW Team RLL is hungry for a good result with the BMW M8 GTE at its home event in Mid-Ohio. The weekend is an absolute treat for BMW fans.”

Martin Tomczyk (GER, #81 BMW M8 GTE): “The first race at Spa-Francorchamps marks the end of a long phase of preparations for me and the entire team. For me personally, the first WEC race is going to be rather special. I am really looking forward to the great track at Spa-Francorchamps and hope we can make a good start with the BMW M8 GTE.”

Nick Catsburg (NED, #81 BMW M8 GTE): “When BMW said they were building a GTE car and joining the World Endurance Championship, I was extremely excited. Our first race at Spa-Francorchamps is now just around the corner. It is a very demanding track for both the car and the driver, but we are well prepared.”

António Félix da Costa (POR, #82 BMW M8 GTE): “I am really looking forward to this project getting going. Spa-Francorchamps is a track that I love. Going into endurance racing is the start of something new in my career.”

Tom Blomqvist (GBR, #82 BMW M8 GTE): “I’m excited to be one of the first drivers to be behind the wheel of the BMW M8 GTE as it makes its WEC debut. A lot is still new to us, and we must see how we stack up against the opposition. However, testing went well and we are prepared for the first race.”

DTM: Good momentum ahead of the season-opener in Hockenheim.
This year’s DTM calendar features ten events with a total of 20 races in six different countries. Hockenheim (GER) is traditionally the venue for the first race of the season. As well as the experienced Augusto Farfus, Timo Glock (GER), Bruno Spengler (CAN) and Marco Wittmann (GER), Philipp Eng (AUT) and Joel Eriksson (SWE) also line up in their debut seasons in the DTM. The BMW M4 DTM has been the subject of extensive modifications in accordance with changes to the regulations – particularly aerodynamically. The car generates far less downforce than in 2017, putting an even greater emphasis on the drivers this year. Wittmann was victorious at the Hockenheimring at the final round of last season. Furthermore, Spengler clocked the fastest time of the four-day test at Hockenheim at the start of April.

Bruno Spengler (CAN, #7 BMW Bank M4 DTM, BMW Team RBM, 157 races, 15 wins, 18 pole positions, 1 title): “I am really excited to finally start the new season. The curtain raiser at Hockenheim is always something special. It is just great to meet the fans again and to feel the unique atmosphere there after the long winter break. My goal is to get the maximum out of me and the car.”

Marco Wittmann (GER, #11 BMW Driving Experience M4 DTM, BMW Team RMG, 74 races, 9 wins, 9 pole positions, 2 titles): “The first race of the season will show where we really stand. We have definitely done our homework, and I am optimistic ahead of the opening race weekend. Each one of us is really looking forward to the season finally getting started again. You can definitely notice the changes to the car. They will make it even more exciting.”

Augusto Farfus (BRA, #15 Shell BMW M4 DTM, BMW Team RMG, 84 races, 4 wins, 6 pole positions): “It will be like a new start for everybody this year with the new rules and the modified cars. That’s a pretty big challenge. Our test at Hockenheim went pretty well so I am very motivated and head to Hockenheim with high hopes of having a clean and good start to the season.”

Timo Glock (GER, #16 DEUTSCHE POST BMW M4 DTM, BMW Team RMR, 74 races, 4 wins, 4 pole positions): “After the long winter, I, like everyone else, am pleased to finally get back down to business. The tests in Hockenheim went well, although I still have really no idea exactly how good we are compared to the others. Our times looked good, but you never know whether somebody else may have had a few kilos of fuel more on board. I am certainly excited.”

Philipp Eng (AUT, #25 SAMSUNG BMW M4 DTM, BMW Team RMR): “I am really looking forward to making my DTM debut. Being given this opportunity at the age of 28 is very cool. The tests so far have shown that we are right up there. For me, the tests were primarily about getting used to the car. It felt very good. Hopefully I will be able to enjoy myself a bit when it all gets going in Hockenheim.”

Joel Eriksson (SWE, #47 BMW M4 DTM, BMW Team RBM): “It is going to be really interesting and I am very much looking forward to my first race in the DTM. After the good Hockenheim test I am feeling quite comfortable and very well prepared.”

IMSA: Home outing for BMW Team RLL.
The fourth race of the season, at the “Mid-Ohio Sports Car Course” in Lexington (USA), is rather special for BMW Team RLL: The team’s headquarters in Hilliard (USA) are only about an hour’s drive from the circuit. Team Principal Bobby Rahal’s (USA) outfit has had to wait a long time to contest another home race in the IMSA WeatherTech SportsCar Championship: the last time the circuit hosted the series was back in 2012. As such, the team is highly motivated to back up its second place at the 12 Hours of Sebring (USA) with another success with the new BMW M8 GTE.

Jesse Krohn (FIN, #24 BMW M8 GTE): “Mid-Ohio is another new track for me this season. I hope we can be more competitive than we were at Long Beach. The team and BMW Motorsport is doing a great job developing the car.”

John Edwards (USA, #24 BMW M8 GTE): “I haven’t raced at Mid-Ohio since the Grand Am series, but it’s something of a home race for me and the team, so I’m glad to be back. I lived in Cincinnati and my parents still live there. It’s a great track.”

Connor De Phillippi (USA, #25 BMW M8 GTE): “Mid-Ohio is a big event for us as a team. The BMW Team RLL headquarters are not far away. It’s a new track for me, so there will have to be a steep learning curve. However, I’m fortunate to have a very experienced team around me to lean on for support.”

Alexander Sims (GBR, #25 BMW M8 GTE): “I am really looking forward to the challenge of Mid-Ohio. It’s completely new to me, so I don’t know what to expect from the weekend. The important thing is to find a good basic set-up as quickly as possible.”