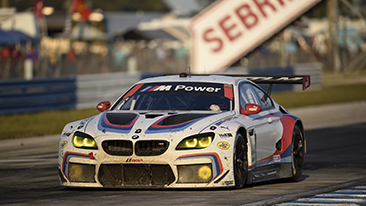 Sebring. In the second round of the IMSA WeatherTech SportsCar Championship (IWSC) in Sebring (USA), the number 25 BMW M6 GTLM, driven by Bill Auberlen (USA), Alexander Sims (GBR) and Kuno Wittmer (CAN), finished sixth in the GTLM class. The three BMW Team RLL drivers completed 334 laps in the 65th running of the endurance classic and delivered a flawless performance over the course of the 12-hour race. However, they couldn’t match the pace of the front-runners at a consistent level which made it impossible to score a top result in Florida. Victory was secured by the number 3 Corvette.

John Edwards (USA), Martin Tomczyk (GER) and Nick Catsburg (NED) experienced a disappointing race, sharing driving duties in the number 24 BMW M6 GTLM. Early in the race the trio lost several laps due to technical issues. Later on, shortly before the halfway-mark, Catsburg crashed into the barriers at Turn 1 of Sebring International Raceway following another mechanical problem. This meant the race was over for the Dutchman and his team-mates.

Once again the Turner Motorsport team delivered a strong race performance in the GTD class. Justin Marks (USA), Jens Klingmann (GER) and Jesse Krohn (FIN) gained several positions after starting 16th with the number 96 BMW M6 GT3. However, a damaged suspension put an early end to the race for the crew of team boss Will Turner (USA).

Action in the 2017 IMSA season will resume in three weeks time with the Long Beach Grand Prix, CA.

Jens Marquardt (BMW Motorsport Director): “We are leaving Sebring very disappointed. A look at the lap time analysis clearly shows that the BoP adjustments after Daytona were by far not enough to classify the BMW M6 GTLM on par with the competition again. Most importantly I feel sorry for the team and our drivers who worked very hard in preparation for and during the race – and weren’t rewarded for this. Thank you to the entire team for their efforts in the past two races. I hope that the BoP will be further adjusted for the remainder of the season, in order to put us in a position again to deliver exciting and hard-fought races with the BMW M6 GTLM.”

Bobby Rahal (Team Principal, BMW Team RLL): “I think we gave it our best. We just don’t have the pace of our competitors. You could see this clearly in the race today. It was a long day for everybody – the crew, the drivers. We will walk on from here. Whatever we can do, we will do it.”

Bill Auberlen (No. 25 BMW M6 GTLM, sixth place): “I always focus on the positives: Our team once again did a fantastic job and didn’t miss a beat. The BMW M6 GTLM ran absolutely flawless, but unfortunately didn’t have the speed for a better finish.”

Alexander Sims (No. 25 BMW M6 GTLM, sixth place): “To be honest, the car actually felt quite nice to drive. The balance was good. But still we couldn’t attack. This was my first race in Sebring, and it was a challenge with all the cars out there, the bumps and the dark night. But it was good fun. Of course we would have preferred to be fighting for positions at the front, but this wasn’t to be. Still there’s a lot we can take from this race.”

Kuno Wittmer (No. 25 BMW M6 GTLM, sixth place): “Sebring is always an emotional race – and a tough one for the team, the drivers and the cars. Completing the 12 hours is always an achievement. For hours we were fighting to get the lap back we had lost early on, which is a very hard thing to do. In the end it worked out. As a team we now need to push forward and improve further.”

Nick Catsburg (No. 24 BMW M6 GTLM, DNF): “One thing is certain: We were not very lucky here in Sebring. Early in the race we suffered a problem with the driveline, then Martin had a puncture. Later on I went out following a pitstop, turned into Turn 1 and something broke. We don’t know what it was yet, but it caused me to go into the wall. The car was heavily damaged. We now need to keep our heads up high and understand what went wrong.”