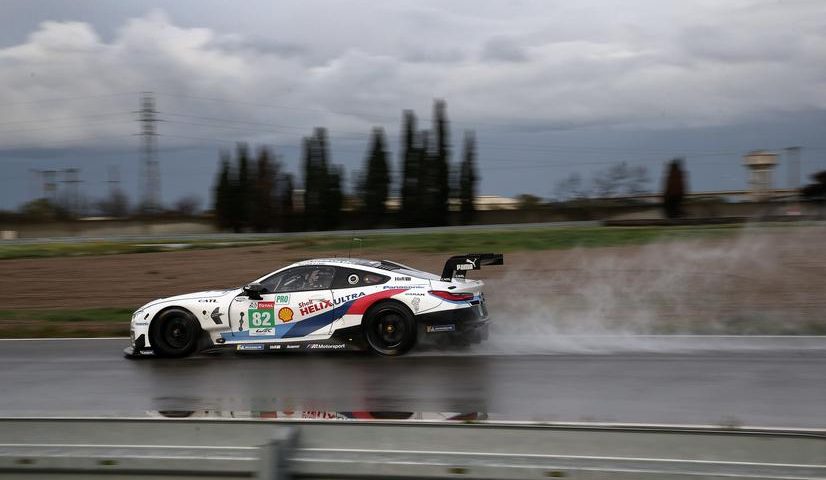 Miramas- November 9, 2018… BMW works driver Alessandro Zanardi (ITA) has successfully completed his first test in the BMW M8 GTE in preparation for the 24-hour race at Daytona (USA) in January. This week, BMW M Motorsport and Zanardi spent three days testing at Miramas in the south of France. Although rain meant the conditions were not ideal, Zanardi was still able to get plenty of laps under his belt with the BMW M8 GTE. In total, he drove almost 700 kilometres over the course of the three days.

“I think I made huge progress during this test,” said Zanardi. “Particularly when you consider that the conditions were very tough. Miramas is not an easy circuit anyway, and then we had the rain to deal with too. It was a challenge getting to know the car in these conditions, and at the same time finding out what I need to do when whilst driving. However, it was a very productive test. My feel for the car improved all the time and I soon found out what I need to be doing with my hands and how I can control the car’s various electronic functions. We are now very well prepared for the next test at Daytona. I have to say, the BMW M8 GTE is a real beauty. It was a privilege for me to take it out onto the track and drive it for so many laps.”

Another part of the test programme was the driver changeover, as Zanardi will share the BMW M8 GTE with other drivers at Daytona. Zanardi practiced the procedures with BMW works driver Jesse Krohn (FIN) at Miramas.

“It is impressive what we achieved,” said Zanardi. “You have to bear in mind that, as well as the usual driver changeover, we must also swap the steering wheel. We consistently achieved that in under 20 seconds, and a few times we even managed the changeover in about 15 seconds. When you observe how quickly a ‘normal’ driver like Jesse jumps out of the car, it is a bit different when you then see somebody like me getting out. Undo the harness, remove the steering wheel, pass it to somebody and jump out of the car – all in less than three seconds. Then turn around, wait until Jesse is in, climb back into the car, hook my leg into the frame, help Jesse with the radio and harness, pass him the other steering wheel, close the net and get away from the car…It is really impressive and looks a bit like a dance. We will now continue to work on perfecting the driver changeover.”

Also at Miramas was Nathalie McGloin, President of the newly-formed “FIA Disability and Accessibility Commission”. She used the visit to speak to Zanardi and BMW M Motorsport about opportunities for physically impaired racing drivers.

BMW M Motorsport is working closely with the FIA, ACO and IMSA to gain approval for a car adapted to Zanardi’s needs for GTE races.