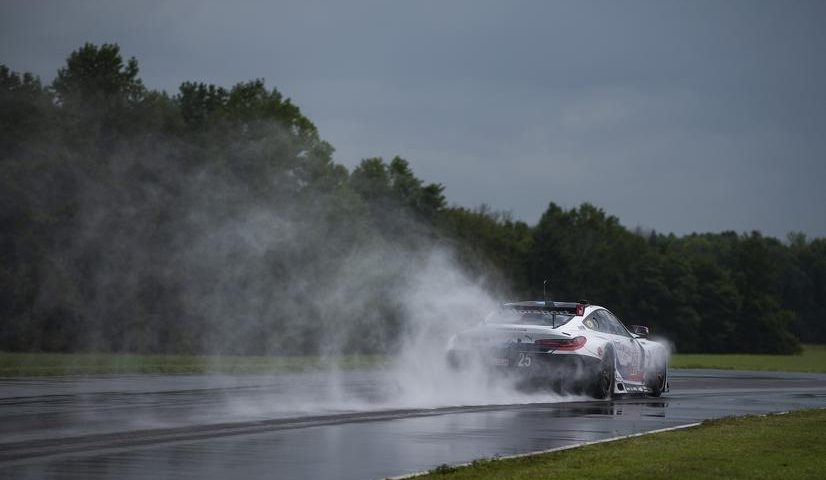 Woodcliff Lake, N.J. – Aug. 18, 2018… After three practice sessions under very hot and humid conditions, a rain shower just before the GTLM class qualifying session this afternoon soaked the Virginia International Raceway circuit and slowed the pace of the field. Electing to use Michelin wet tires on both cars, BMW Team RLL qualified in third and fifth starting positions for tomorrow’s Michelin GT Challenge at VIR.

John Edwards recovered from an off-course excursion on his first lap to qualify the No. 24 BMW M8 GTE in third position with a time of 1:56.185 minutes on his fifth lap of the 15-minute session. Connor De Phillippi qualified the No. 25 BMW M8 GTE in fifth with a 1:57.148 minute lap. The pole position was won by the No. 67 Ford GT. Edwards will co-drive the No. 24 with Jesse Krohn and De Phillippi will share the No. 25 machine with Alexander Sims.

Last year, the No. 25 M6 GTLM of Bill Auberlen and Alexander Sims controlled the race until a puncture with eight laps remaining dropped the duo from the lead to a fourth place finish.

Co-driving the No. 96 Turner Motorsport BMW M6 GT3 with Robby Foley this weekend, Bill Auberlen qualified the car in the third GTD class starting position with a 1:44.360 minute lap.

“That was an exciting qualifying session with the rain,” Brandon Fry, BMW Team RLLTechnical / Racing Operations Director. “We were close but had some small mistakes. Still third and fifth are very reasonable starting spots. As a group I think we should feel good about the race tomorrow.”

John Edwards, driver No. 24 BMW M8 GTE (P3): “After the off and especially towards the end of the session I had it under control. It felt quite like the Nordschleife today where half the track was soaked with big puddles and the other half was completely dry. It was very strange to tiptoe around and then push really hard on the dry sections with wet tires. I think we had a real shot at pole. On my last two laps I was very quick until turn 17 where there was a puddle I was hitting wrong because I was getting a little too greedy. I think with a session like that we can be very optimistic about tomorrow.”

Connor De Phillippi, driver No. 25 BMW M8 GTE (P5): “This was my first wet qualifying session in the BMW M8 GTE and my first wet session at VIR. It was definitely a crazy session with conditions changing every lap so you’re adapting to the track conditions as well as the tires and how they’re handling the half dry half wet track. Overall, we should be pleased with both cars starting in the top-five. I was very happy with the car in dry conditions so I think that if we have a clean start we can hopefully work our way to the front in the race.”

Rahal Letterman Lanigan Racing
BMW’s partner, Rahal Letterman Lanigan Racing, based in Hilliard, Ohio and co-owned by three-time IndyCar Champion and 1986 Indianapolis 500 winner Bobby Rahal, former CBS Late Show host David Letterman and Mi-Jack co-owner Mike Lanigan, has been competing for almost three decades. Prior to the start of their 27th season of competition in 2018, the team had compiled 42 victories, 53 poles, 162 podium finishes, three series championships (1992, 2010, 2011) and claimed an Indianapolis 500 victory (Buddy Rice in 2004). In 2009 the team joined BMW of North America to campaign the new BMW M3 in the American Le Mans Series. The following year the team won both the Manufacturer and Team Championships in the GT category and swept all three GT titles – Manufacturer, Team and Driver – in 2011. In 2012, the team finished second in the Team Championship and third in the Manufacturer Championship and in 2013, the team finished second in the Driver, Team and Manufacturer Championship. Since 2014, BMW Team RLL has competed in the GTLM class of the IMSA WeatherTech SportsCar Championship with a two car program and has brought their total to 17 wins, 23 poles and 68 podium finishes as well as a second place finish in the Manufacturer, Team and Driver championships in 2015 and in 2017.