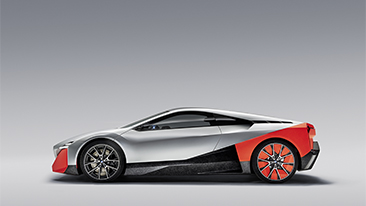 Last year BMW made a promise of new models by presenting the Concept M8 Gran Coupe and this year BMW delivered on the promise by unveiling the production M8 Coupe and M8 Convertible. BMW also premiered the all new BMW M850i Gran Coupe. All three models will arrive in the US market within the next few months.
The M8 Coupe and Convertible are the new top performance models in the BMW M brand lineup. Available in standard and Competition models, these new M cars take the proven M5 and M5 Competition near-supercar capabilities to an even higher level while offering all of the luxury and design that the 8 Series has to offer.

The launch of the new M8 is unique in that the race car made its appearance almost two years before the production street versions will be available in showrooms. In those past two years of testing and racing in the IMSA WeatherTech Sports Car Championship, the BMW M8 GTE collected three victories, including the prestigious 24 Hours of Daytona, four additional podium finishes and three pole positions. A very solid foundation for the pinnacle model in BMW M GmbH’s portfolio.

The new four-door 2020 8 Series Gran Coupes offer an unmatched combination of beautiful design, luxurious appointments, the latest driver assistance systems, connectivity and sports car performance expected from the top of the line of BMW automobiles. The 8 Series Gran Coupes will be available in rear-wheel drive 840i, all-wheel drive 840i xDrive and M850i xDrive models.

Presenting a unique design from the windscreen back, the new BMW 8 Series Gran Coupes are 9.0 inches longer, 1.2 inches wider, 2.2 inches taller than the 8 Series Coupe and feature a wheelbase which is 7.9 inches longer. Handcrafted exterior elements confirm the new 8 Series Gran Coupe as the choice for those discriminating drivers seeking modern elegance and exhilarating performance.

BMW presented two new concept vehicles on the Pebble Beach Concours d’Elegance Reviewing Stand. The first was the BMW Garmisch – a faithful recreation of a long lost concept car originally created by Bertone for the 1970 Geneva Auto Show. Penned by Marcello Gandini, The BMW Garmisch concept car was developed as an independent design proposal intended to demonstrate the studio’s creativity. “The original idea came from Nuccio Bertone himself who wanted to consolidate our existing relationship with BMW by designing a surprise show car for the 1970 Geneva Motor Show”, remembers Marcello Gandini, who was in charge of Bertone’s design department at the time. “We wanted to create a modern mid-sized coupe that was faithful to BMW’s design language, but that was also more dynamic and even a bit provocative.” Gandini was perhaps one of the most prolific auto designers of the 60’s and 70’s with many iconic designs to his credit. After its debut at a Geneva, the car was apparently shipped to BMW but somehow vanished.

“Marcello Gandini to me is one of the grandmasters of car design and his cars always have been an important source of inspiration for my work”, says Adrian van Hooydonk, Senior Vice President of BMW Group Design, who has been intrigued by the BMW Garmisch since he first discovered a faded period picture of the car some years ago. “Building the BMW Garmisch for a second time gave us the opportunity to pay tribute to Mr. Gandini, recall one of his lesser-known cars and highlight Bertone’s stylistic influence on the evolution of BMW design. For me, that alone was reason enough to do this project – filling in the gaps and completing BMW’s history.”

The BMW Garmisch was completed in early 2019 and first presented at the Coucorso d’Eleganza Villa d’Este in May.

The second concept is a bold look into the future of BMW M. In the future, drivers will be able to choose whether they wish to be driven (‘EASE’ mode) or do the driving themselves (‘BOOST’ mode). With the BMW Vision M NEXT, the BMW Group is revealing its take on how The Ultimate Driving Machine might look in future for those who enjoy dynamic driving. It offers a look into the BMW M brand’s electrified future by placing the focus squarely on the engaged driver. Intelligent technologies on board provide comprehensive yet carefully targeted assistance to turn them into the ultimate driver.

“The BMW Vision M NEXT provides a glimpse into the future of sporty driving,” says Adrian van Hooydonk, Senior Vice President BMW Group Design. “Where the BMW Vision iNEXT illustrated how autonomous driving is set to transform life on board our vehicles, the BMW Vision M NEXT demonstrates how state-of-the-art technology can also make the experience of driving yourself purer and more emotionally engaging. In both models, the focus is firmly on the people inside. Design and technology make the ‘EASE’ and ‘BOOST’ experiences more natural and more intense.”

The actual driving experience in the BMW Vision M NEXT is every bit as captivating as its looks. The Power PHEV drive system in offers the choice between electric all-wheel drive and pure rear-wheel drive, with either all-electric propulsion or the power of a turbocharged 4-cylinder gasoline engine. System output of 600 hp produces a top speed of 186 mph and enables the BMW Vision M NEXT to sprint from 0 to 60 mph in under 3 seconds. There is also a BOOST+ mode that puts extra power on tap at the push of a button. The maximum range when driving in all-electric mode is 62 miles – more than enough to complete the majority of journeys purely on electric power. This means the BMW Vision M NEXT is a sports car that would also be suitable for use in city centers where zero-emissions zones may come into force in the future.

In addition to the large group of new models unveiled, BMW will be an integral part of the Rolex Monterey Motorsports Reunion again this year as International Motor Sports Association (IMSA) celebrate 50 years of sports car racing in the USA. BMW will run four historically significant cars driven by four iconic IMSA drivers. 1975 Sebring 12 hour winner and 1976 Daytona 24 winner Brian Redman will be re-united with the number 25 1975 IMSA Group 4 3.0 CSL. BMW ace driver Bill Auberlen will drive the 1999 Sebring 12 hour winning BMW V12 LMR. Auberlen, who has over 420 race starts in BMWs already holds the record for most IMSA pole positions and is currently only two wins away from being the driver with the most IMSA victories. BMW Motorsport drivers John Edwards will drive the unbeatable-in-its-day, fire breathing V8 powered 2001 (E46) M3 GTR and Connor DePhillippi will drive the Number 56 2011 (E92) M3 GT that gave BMW and BMW Team RLL the class driver, manufacturer, team and Michelin Green X championships in 2011. The V12 LMR, M3 GTR and M3 GT will compete in the new for 2019 ‘Masters Endurance Legends’ class with 40 minute races on both Saturday and Sunday.