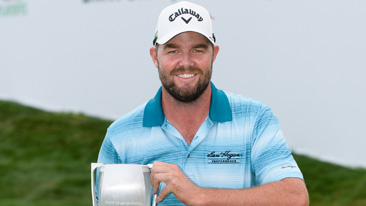 Lake Forest, IL (September 17, 2017) – BMW congratulates Marc Leishman on winning the 2017 BMW Championship today at Conway Farms Golf Club in Lake Forest, IL.  Leishman took charge from the start, completing the first round nine-under par and never looking back. Once atop the leaderboard, Leishman remained in control, finishing today at a total of 23-under to secure his victory, tying the tournament record.

“I set goals and always thought I was good enough to get into that top twenty. It’s pretty cool to now get into the top fifteen,” said Marc Leishman regarding his FedEx Cup standing. “It’s another thing that’s pretty satisfying about today.”

“Congratulations to all of the players, staff and volunteers on another great BMW Championship – and congratulations to Marc Leishman on an impressive performance,” said Bernhard Kuhnt, President & CEO, BMW of North America. “Marc played with a lot of skill and determination to secure this well-deserved victory.”

On Friday, September 15, Jason Day recorded a hole-in-one, resulting in the donation of a fifth BMW Hole-in-One Scholarship – a full, four year Evans Scholarship worth $100,000. Day aced the 17th Hole at Conway Farms, which also earned him a BMW M760i, which he in turn donated to the Evans Scholars Foundation.

In the 2017-2018 academic year, 965 caddies will be attending 19 major universities on Evans Scholarships. The proceeds from the 2017 BMW Championship, along with the generosity of Jason Day and the BMW Hole-in-One Scholarship in his name, will support the Evans Scholars Foundation’s goal to have 1,000 caddies actively enrolled in college by the year 2020.