Statement Dr Nicolas Peter, Member of the Board of Management of BMW AG, Finance, Conference Call Interim Report to 31 March 2020 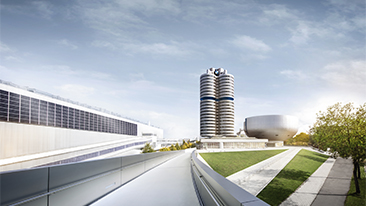 Historic flashback to celebrate the 100th Annual General Meeting of the BMW Group. Since its establishment more than 100 years ago, the company has always generated new impetus from overcoming particularly difficult situations. Innovative strength and courage, determination and team spirit form the foundation for this innate spirit of renewal.

Munich, Germany- May 14, 2020… Over more than 100 years of history at the BMW Group, there have been many events that have presented the business with exceptional challenges – much like the current situation. Lots of highs and some lows have been encountered on the pathway from the modest aero-engine factory to the status of leading premium manufacturer of automobiles and motorcycles. Celebrating the occasion of its 100th Annual General Meeting, the BMW Group looks back to key moments in the development of the company and remembers how the associated difficulties were overcome.

Every crisis – and this also applies to the present – entails an opportunity to emerge with renewed strength. What powers are necessary to achieve this? A company with innovative strength that embraces change and is geared to the future. A company producing pioneering products with the courage to develop unique solutions and the indomitable will to compete with the best. Then you also need a highly motivated workforce that is always willing to go the extra mile. These capacities, abilities and skills have always empowered the company to overcome setbacks, surmount crises and master new challenges. The prism of history and key corporate indicators from more than 100 years show how crisis situations have repeatedly provided the launchpad for developing renewed strength and continuing the success story of the BMW Group.

1919: Reliable engines are required – not just in the air.
During the First World War, the fledgling company was only manufacturing one product: the BMW Illa aeroengine. The 6-cylinder inline engine had the reputation of being the best aero-engine of its era. Its design principle was now transferred to the successor model – and the superiority of the technology was proven with a World Record. On 17 June 1919, an aircraft powered by the BMW IV aeroengine took a pilot to an altitude of 9 760 metres for the very first time. Never before had an aircraft flown so high. But after the end of the war, production of aero-engines was prohibited in Germany. New ideas had to be generated so that the expertise in building engines could continue to be applied productively. Consequently, BMW expanded its product range. Power units were marketed as the “Bayern-Motor” or “Bavaria Engine”, which in common with the aero-engines featured reliable and fuel-efficient operation. They were mounted primarily in boats, trucks and buses.

1923: From engine supplier to motorcycle manufacturer.
Reliability was also the chief hallmark of the “Bayern-Kleinmotor” (Bavaria Small Engine). The first Boxer engine from BMW was only supplied to other manufacturers. The main purchaser was Nuremberg-based company Victoria, which very successfully mounted the engine in its motorcycles. But when Victoria moved over to using an engine the company had developed in-house, BMW’s sales collapsed. In this situation, the company management made the daring move of taking a big leap forward. Chief Designer Max Friz was commissioned to develop a complete motorcycle. The BMW R 32 was presented at the German Motor Show in 1923. While other manufacturers were still focused on the geometry of bicycles, Friz had consistently designed the BMW R 32 around the engine. For the first time, a twin Boxer engine was mounted in the model with the cylinders arranged transverse to the direction of motion. When motorcycle manufacture started up again, BMW was transformed from an engine supplier into a vehicle manufacturer.

1948: New beginning on two wheels.
After the end of the war in 1945, BMW lost its production site in Eisenach since it was located in the Soviet occupation zone, and with loss of the location went the know-how necessary for automobile manufacture. At the same time, work began on dismantling the facilities in Munich, parts of which had been destroyed. Nevertheless, a start was made on a modest beginning with emergency production of pots and pans, fittings, agricultural implements and a handful of bicycles with lightweight alloy frames. Then the military authorities gave the green light to restart production of motor vehicles and the BMW R 24 was the first post-war motorcycle to be produced in Munich in 1948. The single-cylinder engine received an enthusiastic reception, becoming a symbol of entrepreneurial courage and signalling the launch of a new era of individual mobility. More than 12 000 machines were sold and the successor model BMW R 25 achieved almost double the number of motorcycles. And just one year later, another model powered by a Boxer engine followed in the form of the BMW R 51/2.

1957: Lean times and new markets.
By 1954, the annual production at the Munich plant had risen to 30 000 motorcycles. But soon after that the market underwent a change. The motorcycle lost out in terms of image and prestige to the automobile. Within the space of just three years, the sales figures came down to 5 400 BMW motorcycles. Nevertheless, the company steadfastly continued with motorcycle production. Traditional business from government agencies continued to be a mainstay of the business in times of crisis. BMW motorcycles were especially successful with the police service because of their reliability and smooth-running characteristics – not only in Germany but also in many other countries. Equipping police patrols often paved the way for entry into new markets. Persistence ended up paying off. New models and the relocation of BMW Motorrad production to Berlin in 1969 presaged a new chapter of success. The newly developed /5 Series was consistently designed as a sports racing machine and lent pioneering momentum to the motorcycle sector. As a sports and leisure machine, the motorcycle experienced a comeback and BMW was ideally positioned with its new models to emerge stronger from the motorcycle crisis.

1959: Small shareholders prevent the takeover of the company and the “New Class” provides the breakthrough.
At the end of the 1950s, BMW was on the edge of financial collapse. Sales problems in the automobile and motorcycle business had put the company in serious difficulties. At the Annual General Meeting in December 1959, the sale of the company to Daimler Benz AG appeared to be already a foregone conclusion. However, it failed with a last-minute reprieve as a result of committed small shareholders putting up spirited resistance to the restructuring plan that was part of the takeover. The shareholders’ principal criticism was that the BMW brand and its workforce had been valued much too low in the restructuring concept. BMW remained independent but the basis for economic recovery was only laid a year later with a new restructuring plan developed under the aegis of major shareholder Herbert Quandt. His plan was based on the independence of BMW AG, new structures and new models. The new BMW 700 small car steered the company back on the road to success and the real breakthrough ultimately came with the BMW 1500, the first model in the “New Class”.

1973: Through the oil crisis on a countercyclical bounce.
Society’s attitude to the automobile underwent a change after the oil crisis in 1973 with its speed limit of 100 km/h and the car ban on Sundays. Big cars with large engines fell out of favour along with powerful sports cars. However, the management at BMW set about getting through the lean period and coming out stronger at the other end. Pioneering investments highlighted the countercyclical strategy. In Munich, the new Group Headquarters building known as the “Four-Cylinder” and the BMW Museum were opened. And in Dingolfing a new production plant started up operations in November 1973. The vehicle development engineers responded quickly and presented the BMW 1502 and the BMW 518 as two fuel-efficient entry-level models in 1974. When the oil crisis petered out in spring of 1975, demand started to take off again. BMW was in an ideal position for the upturn with new models, expanded production capacities and optimised sales structures. This was already confirmed during the first quarter of 1975. BMW had smashed the previous record from 1973 by around 50 percent with 78 000 new vehicles registered. Two models posted particularly good sales: the BMW 1502 and the BMW 518.

1994: Liaison with consequences – MINI and Rolls-Royce remain from the British subsidiary.
During the 1970s and 1980s, BMW developed into one of the fastest-growing automobile manufacturers in the world with a broadly-based model range and a steadily increasing number of employees in the workforce. The acquisition of British automotive manufacturer Rover Group on 31 January 1994 was intended to significantly expand the range of automobiles on offer. However, the development opportunities were overestimated when the purchase was made. The company underwent restructuring to form the BMW Group and after six years the British subsidiary was sold. Only the MINI brand remained with the BMW Group. The modern MINI presented in 2001 generated a revolution in the small-car segment – emulating the launch of its classic predecessor. The new MINI embarked on an extraordinary success story with premium quality and modern safety, combined with driving fun and individual style. Furthermore, the BMW Group succeeded in securing the name rights for the Rolls-Royce marque. Since 2003, the BMW Group has therefore been present in the blue-riband luxury class. A new plant had previously been built for production of the new Rolls-Royce Phantom at Goodwood in the United Kingdom.

2009: The i project comes to fruition in the financial crisis.
From autumn 2008, a global crisis in the financial markets rocked not only the banking sector but also numerous other sectors. As a consequence of this, automobile sales in the most important markets underwent a significant fall. Government stimulus packages were initiated in order to re-launch demand and most importantly to support the purchase of particularly efficient models. While huge efforts were made worldwide to secure the future of the automobile business, the BMW Group ran a covert project which was to completely redefine the concept of individual mobility. With this aim in mind, the BMW Group had already launched project i in autumn 2017. The objective was to develop an all-electric automobile for use in metropolitan urban areas and in parallel to design a complete ecosystem for local zero-emission driving. The BMW i3 was presented in autumn 2013 – and this was accompanied by a host of concepts, packages and services for innovative materials, an environmentally benign production process and a charging infrastructure which transformed electromobility into an experience full of comfort and marked by driving fun.