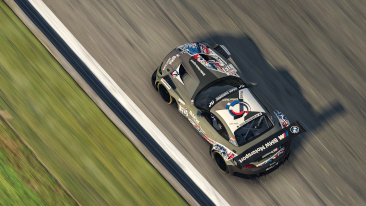 Munich, Germany- April 3, 2020… On Saturday, BMW Motorsport will field a large contingent of BMW drivers in race two of this sesson’s Digital Nürburgring Endurance Series powered by VCO. A total of eight virtual BMW Z4 GT3s are registered, including BMW Team Green Hell with BMW works drivers Martin Tomczyk and Jens Klingmann (both GER), the BMW Bank team with BMW works drivers Bruno Spengler (CAN) and sim racing YouTuber Jimmy Broadbent (GBR), as well as the BMW Junior Team with Dan Harper (GBR), Max Hesse (GER) and Neil Verhagen (USA). BMW works drivers Philipp Eng (AUT) and Jesse Krohn (FIN) will be driving for the BS+COMPETITION and VRS Coanda Simsport teams. As well as the BMW drivers, some of the best sim racers in the world will also be in action. The race gets underway at 13:00 (CEST) on Saturday.

“In the current situation, motorsport events at the racetrack are unfortunately inconceivable. We established sim racing as an additional pillar in our motorsport programme last year,” says BMW Group Motorsport Director Jens Marquardt. “This basis has given us the opportunity to run virtual motor racing from home right now. It is really exciting to see our BMW works drivers take on other professional racing drivers, as well as some of the best sim racers in the world, particularly when they do so in our virtual race cars, like the BMW M8 GTE or the BMW M2 CS Racing in the BMW Sim Cups. I find it fascinating how similar animation and TV images sometimes are to a real race. Our drivers keep telling us that sim racing helps them to permanently improve some of their real racing skills as well. I think sim racing is a great addition to our motorsport involvement and a welcome distraction for fans and drivers, particularly these days.”

BMW cars compete in special liveries.
One highlight is the special designs on a number of the BMW Z4 GT3s. For example, BMW Team Green Hell will race in the classic BMW M Motorsport colours with the message #STAYHOME, as it did in the opening round of the season. New to the starting line-up is the BMW Bank car in its classic ‘Black Beast’ design, which has become such a familiar feature on the DTM grid. The BMW Junior Team car also has a new look: Michael Scully and his Designworks team were commissioned by BMW Motorsport to come up with a special BMW Junior Team logo, and have integrated this in a spectacular livery. The BMW M2 CS Racing will sport a similar BMW Junior Team design in the Cup competition of the same name.

The second race of this season’s Digital Nürburgring Endurance Series powered by VCO will be streamed live from 13:00 (CEST) on Saturday on the following BMW Motorsport channels: