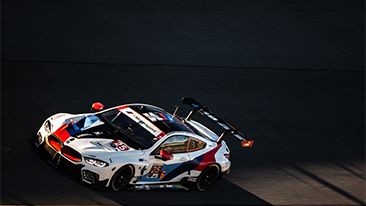 Now in its ninth year as title sponsor, BMW of North America, LLC will support the race with the Grand Marshal and Starter roles and will supply the Official Safety and Pace cars. In past events, fans at the Daytona International Speedway have been among the first to see latest new BMW performance models lead the field. This year the Safety Car will be the all-new 2020 BMW M8 Competition Coupe, the long awaited production version of the BMW M8 GTE racing car that debuted at the Speedway in 2018 with BMW Team RLL.

Also making its debut at Daytona in 2018, the BMW M4 GT4 returns for a third season of competition in the capable hands of BMW Customer Racing teams; BimmerWorld, Fast Track Racing and Turner Motorsport.

“The first round of the 2020 Michelin Pilot Challenge will be presented by BMW of North America, as we have been pleased to do for quite a few years now during our partnership with Daytona International Speedway,” stated BMW of North America Motorsport Manager Victor Leleu. “The BMW Endurance Challenge at Daytona race symbolizes the importance of our customer racing program in North America. We are proud that we will see the largest field of BMW M4 GT4 racing cars entered this year since the launch of that model two seasons ago. We have three teams returning to this race, BimmerWorld, Fast Track Racing and Turner Motorsport, with five cars. Returning drivers include James Clay and Devin Jones who had an excellent 2019 season, finishing third in the Grand Sport class in the No. 82 BimmerWorld M4 GT4. After a brief hiatus, we’ll see Aurora Straus return to competition with Turner Motorsport. Classic BMW will add Robbie Dalgleish, the winner of the Sunoco 240 Challenge prize, and BMW Motorsport’s newest works driver, Beitske Visser. We will also feature the all-new BMW M8 Competition Coupe as the race’s safety car, almost two years after the introduction of the BMW M8 GTE at the Daytona International Speedway.”

BimmerWorld –
Last season’s top-finishing BMW team in IMPC competition, BimmerWorld , has two cars entered in the field at Daytona. James Clay and Devin Jones, third-place overall Grand Sport class finishers last year, will be looking to improve on their eleven top-10 finishes, including three podiums to move up the ranks in 2020. Nick Galante and Dillon Machavern will pilot the second BimmerWorld M4 GT4.

James Clay, Team Principal – “We will run two BMW M4 GT4 racing cars for the full IMPC season in 2020. The second car certainly adds a bit more work, but we can progress at a faster pace with the additional data. We have finished third in the GS (Grand Sport) standings for two consecutive years and adding the second car will improve our chances at moving up this year.”

Toby Grahovec, Team Principal – “We are pleased to welcome Robbie Dalgleish, the Sunoco 240 Challenge winner, as well as Beitske Visser, a significant addition to our driver lineup for the BMW Endurance Challenge. The BMW M4 GT4 has proven to be strong at Daytona and we are looking forward to the race.”

Turner Motorsport –
Turner Motorsport returns to full season IMPC competition with one BMW M4 GT4 for Connor Bloum and Aurora Straus and will add a second car for the Daytona race piloted by Bill Auberlen, Vin Barletta and Robby Foley.

Will Turner, Team Principal – “This year is very exciting for Turner Motorsport. Certainly racing three cars in two different series at Daytona is a challenge, but that is not new for us. Over the years I’ve been very fortunate to have built up an excellent team so while we will have dedicated crews for each car, certain folks will share the programs to give us the best opportunity for success. I believe we have the strongest team we’ve ever had.”

The BMW Endurance Challenge At Daytona takes the green flag at 1:00 p.m. Friday, January 24th. The race will be streamed live on Track Pass on NBC Sports Gold and will be televised Feb. 6th at 1:00 p.m. ET on NBCSN.