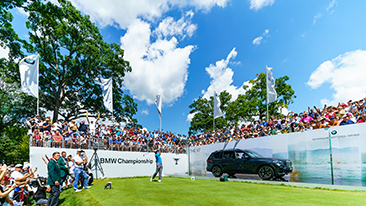 Medinah, Ill. – August 18, 2019… BMW congratulates Justin Thomas on winning the 2019 BMW Championship today at Medinah Country Club in Medinah, Illinois in record-setting fashion. Thomas put on a sterling four-day performance to capture the title with a final score of 25-under par, to win his first-ever BMW Championship.

“It’s hard, I was really nervous today,” said Thomas. “It’s hard to play with a lead but I was enjoying it though. This is why you play. It’s like I forgot how hard it is to win and this is why it’s taken this long. This game is hard, and you don’t know how often things like this are going to happen but, we’ve been working hard to get back to it and it feels great.”

Thomas’ final four-day score of 263, which was the lowest score in relation to par in the history of the event, capped off a historic week at the tournament-tested Course No. 3 at Medinah. During Thursday’s first round, he tied the then-course record with a 7-under 65. Then, on Saturday, he put on a memorable performance with a record-setting round of 11-under, carding a 61. That round bested the existing course record of 63, set during Friday’s second round by Hideki Matsuyama.

Cantlay, who finished behind Thomas at 22-under, capped his final round off with a birdie on the 72nd hole to secure a second-place finish. Additionally, Matsuyama, who finished at 20-under, concluded a wild championship weekend, which saw him shoot 63 twice in the final three days of the event.

Following his victory, Thomas was presented with the BMW Championship trophy, as well as the historic J.K. Wadley Trophy.

“Congratulations to Justin Thomas on a historic, record-setting performance in winning the 2019 BMW Championship,” said Bernhard Kuhnt, president and CEO, BMW of North America. “We are proud to be returning to the Chicago area next year for the 2020 BMW Championship with him as our defending champion. This event is impactful in the lives of so many young caddies, and we are happy to be continuing our relationship with the Western Golf Association and PGA TOUR.”

Earlier on Sunday, BMW, in conjunction with the PGA TOUR and Western Golf Association announced that the premium auto manufacturer will return as the title sponsor for the BMW Championship through 2022. With the FedExCup Playoffs’ move to the middle of August beginning this year, the BMW Championship was given a premier spot on the PGA TOUR’s schedule.

Thomas will defend his title when the BMW Championship returns to the Chicago area at Olympia Fields Country Club’s North Course in Olympia Fields, Ill. on August 20-23, 2020.

About the Evans Scholars Foundation
The Evans Scholars Foundation, the nation’s largest scholarship program for caddies, provides full housing and tuition college scholarships to young caddies who show academic promise and financial need. Overseen by the Western Golf Association, the golf charity has helped more than 11,500 caddies graduate from college since 1930. This fall, 1,000 Scholars are attending 18 universities nationwide.