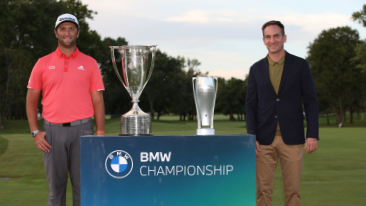 Rahm’s win seemed improbable, given that he began his week with a first-round score of 5-over 75. However, he made a dramatic surge up the leaderboard over the weekend, putting together a 36-hole score of 10-under par on Saturday and Sunday, before Johnson forced the sudden death playoff with a shocking birdie putt of his own on the 72nd hole of the championship.

“The 75, I was just feeling a little bit uncomfortable off the tee,” said Rahm. “It’s hard to get it going on this course when you’re missing fairways. On Friday I started striping it a little bit more. Went to the range and started feeling a little bit better before the weekend, a little bit like I did the week before. And that’s how I played the last two days. Today, I believe, I hit 18 out of 19 greens, and I only missed three fairways, after hitting driver pretty much everywhere. Just a lot of confidence, stayed aggressive, and it paid off.”

Despite the 2020 BMW Championship being contested without spectators due to the COVID-19 pandemic the incredible birdie putts by Johnson and then Rahm, still managed to elicit cheers from volunteers and workers putting on the championship. It capped off a thrilling final day of golf which saw the Spaniard Rahm stave off charges from Johnson, Joaquin Niemann of Chile and Hideki Matsuyama (2-under, 278) and American Tony Finau (1-under, 279).

Following his victory, Rahm was presented with the BMW Championship trophy, as well as the historic J.K. Wadley Trophy.

“Congratulations to Jon Rahm on capturing the 2020 BMW Championship,” said Bernhard Kuhnt, president and CEO, BMW of North America. “On behalf of everyone at BMW, I’d like to thank the Western Golf Association, the PGA TOUR, and the volunteers who helped out this week. A special thank you also to the great grounds crew at Olympia Fields who kept the course in exceptional condition, and to the members of the club for their continuing support of the Evans Scholars Foundation. The BMW Championship is so important because of what it gives back to so many young caddies, so we’re especially happy to host the event during this unique time.”

Earlier this week, BMW, in conjunction with the PGA TOUR and Western Golf Association held the first-ever BMW Match Play Challenge, to benefit the Evans Scholars Foundation.  The nine-hole charity exhibition match, featured two-man teams of Bryson DeChambeau and Kevin Na against Collin Morikawa and Max Homa, and multiple challenges within the match play event – a 7-club “Chick Evans Challenge” honoring the namesake of the Evans Scholarship; a longest drive competition; and a closest-to-the-pin competition.

The team of DeChambeau and Na emerged victorious, with a total of 68 points. As a result, the BMW Championship announced it would establish a full tuition and housing scholarship, as well as a donation for each point scored by the winning team, in the name of DeChambeau and Na. The result was $193,000 donated to the Evans Scholars Foundation.

Rahm will look to defend his title next year, when the BMW Championship travels to the Baltimore area for the very first time, to Caves Valley Golf Club in Owings Mills, Md. on August 23-29, 2020.
2020 BMW Championship Sunday PR