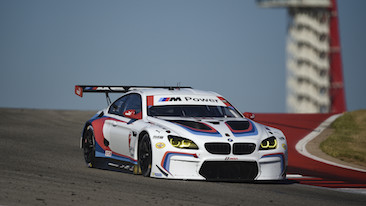 Woodcliff Lake, N.J. – May 5, 2017… BMW Team RLL returned to the sharp end of the IMSA WeatherTech SportsCar Championship field in today’s 15-minute qualifying session for Saturday’s Advance Auto SportsCar Showdown as John Edwards scored the first pole position of the season for BMW. Edwards, driving the No. 24 BMW M6 GTLM he shares with Martin Tomczyk, lapped the 3.4-mile, 20-turn Circuit of the Americas, in Austin, Texas, with a 2:02.833 minute lap to top the very close GTLM grid and record a new qualifying record. The entire field was separated by less than one second, with only two-tenths of a second between the first six cars. The pole was the 23rd of the BMW Team RLL program and the third for Edwards as a BMW Team RLL driver (Lime Rock Park, 2013; Road America, 2014).

Alexander Sims, driving the No. 25 M6 GTLM, qualified in the third position with a 2:02.990 minute lap – only .157 seconds from Edwards. Today’s results represent a turning point for the BMW M6 GTLM program that has taken strong steps since the 12 Hours of Sebring in March to increase the competitiveness of its effort.

“Getting the first pole of the season with a qualifying record has meant a lot of hard work with everyone involved within BMW Team RLL and to see this result brings a boost of enthusiasm to the team,” said Neil Fife, BMW Team RLL Race Engineer. “COTA is a very abrasive track, so maintaining the performance of the car over the long run is really going to be the key for tomorrow. We are looking optimistic but we know it is going to be a tough race.”

John Edwards, driver No. 24 BMW M6 GTLM (P1): “It’s been a while since I’ve gotten a pole, so it is really gratifying to see number one after I stepped out of the car. It was nerve racking but ultimately I was able to stay on top and keep the pole. COTA is a challenging place as it has a little mix of everything. There is less than a quarter of a second separating the first seven cars so we know tomorrow is going to be a very tight race. Managing the tires and traffic are going to play a key role and we’ll do everything we can to close it up tomorrow for a win here at COTA.”

Alexander Sims, driver No. 25 BMW M6 GTLM (P3): “Congratulations to the sister car that got pole! It was a very close qualification session and I think we did a pretty good job. The car felt well balanced and we were able to have some clean laps with just the GTLM field out at the track. We are looking forward to the race and I think we are in good shape of scoring a podium finish.”