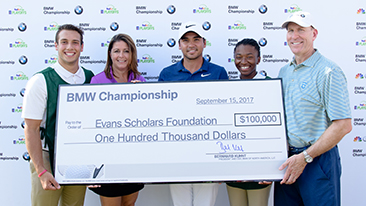 Lake Forest, IL – September 15, 2017… On the second day of play at the 2017 BMW Championship, Jason Day recorded a hole-in-one, resulting in the donation of a BMW Hole-in-One Scholarship, a full, four-year scholarship worth $100,000 to the Evans Scholars Foundation. Day aced the 17th hole on Friday, September 15 at Conway Farms Golf Club in Lake Forest, IL with a 7-iron, from 188 yards.

Additionally, Day made his impressive shot on one of the two holes at the BMW Championship that awards a new BMW to the first player to make a hole-in-one. With his shot, Day also receives an all-new BMW M760i, the perfect combination of BMW performance and luxury.

In turn, Day graciously donated his new BMW to the Evans Scholars Foundation — further supporting its mission of sending hard working caddies to college and a goal of having 1,000 caddies enrolled annually in college by 2020.

“On the TOUR we aim to give back. For BMW to give back as well and put a student through college is huge,” said Jason Day following his shot. “I’m going to donate the car to help an additional student because I am in a fortunate position, and being able to not only impact another person’s life but to also get them through college is huge as well.”

All net proceeds from the BMW Championship benefit the Evans Scholars Foundation, which provides full college scholarships to hardworking, young caddies with financial need and strong academic records. Since 2007, BMW has contributed more than $24 million to the Evans Scholars Foundation. Day’s shot marks the fifth time BMW has awarded a Hole-in-One Scholarship in a player’s name. Past recipients include:

“Congratulations to Jason Day on his incredible shot today and his overwhelming generosity,” said Trudy Hardy, Vice President, Marketing, BMW of North America. “Being able to provide a fifth full, four-year BMW Hole-in-One Evans Scholarship to a hardworking, young caddie is extremely satisfying and we are honored to be able to provide him or her with this opportunity to attend college worry-free.”

“This generous contribution is one of many ways BMW shows its support for our mission of sending deserving young caddies to college,” said John Kaczkowski, president and CEO of the Western Golf Association and the Evans Scholars Foundation. “We’re grateful to have BMW as our title sponsor and partner, and we’re thrilled to use this donation to fund a full Evans Scholarship.”

For updates during The 2017 BMW Championship, follow the conversation with: