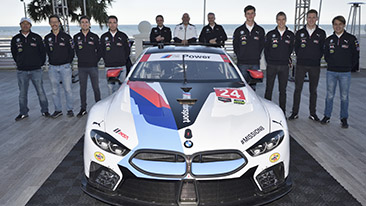 Daytona- January 25, 2018… BMW Motorsport presented the new BMW M8 GTE in its livery for the 2018 IMSA WeatherTech SportsCar Championship in Daytona (USA) on Wednesday. The running of two cars in the GT class in the 24-hour race at the “Daytona International Speedway” represents the race debut and the next milestone in “Mission8”. Speaking in an interview, BMW Motorsport Director Jens Marquardt looks back on the development of the BMW M8 GTE and underlines the importance of team spirit in the development crew.

Mr Marquardt, the race debut of the new BMW M8 GTE is just around the corner. Take us through the development of the car over the past few months. How did it all begin?

Jens Marquardt: “The first race for the new BMW M8 GTE at Daytona will be very special for every one of us at BMW Motorsport. The roots of the GTE project lie in a combination of many aspects. At the start of the programme, back in 2015, the goal was to expand our activities in traditional motor racing – BMW M Motorsport – and to position ourselves even more internationally. At the same time, the possible return to Le Mans brought its very own fascination for our team. However, the most important factor was that the production model, the BMW 8 Series Coupé, was developed at the same time. We were given a green light from the board to develop a thoroughbred GTE racing car, parallel with the colleagues in production development. That is how it all began. Now the BMW M8 GTE is ready for Daytona. For the first time in BMW Motorsport history the race car will be in action before its series counterpart.”

When you started to develop the BMW M8 GTE, there was not actually a production model…

Marquardt: “Correct. Right from the word go, we worked with our colleagues in production development to synchronise the individual steps as closely as possible. It was a challenge. When we needed the first chassis of the production car, there simply wasn’t one yet. We were, however, able to work with special prototype chassis from production development. We progressed step by step in that manner. Furthermore, at the start of our development, there were still minor changes to the production model. To a certain degree, we were dealing with a moving target.”

How was the cooperation with colleagues in production?

Marquardt: “Very close and efficient. The developers on the production side obviously had their own specific challenges to overcome. Despite that, they were always open to the GTE project, and always willing to help. That was real teamwork. We synchronised the focus of our development with the core areas of the production model. The question was: what should the racing car emanate and embody? The core values of the BMW 8 Series Coupé should also be the strength of the BMW M8 GTE.”

Can you give us any examples of these development focal points?

Marquardt: “Let’s take the design aspects. We are obliged to adopt the same external contour and roof line as the production model. However, it was also important to incorporate elements such as the headlamps, the Carbon Core and the centre console in the race car, based on the BMW 8 Series Coupé. The topic of carbon fibre played a major role.”

Does the joint development mean that the BMW M8 GTE is more similar to its production counterpart than any other BMW race car?

Marquardt: “When you look at the regulations, the engine in the BMW M6 GT3 is extremely close to that in the production model. However, we were able to make more substantial changes to the chassis. In the case of the BMW M8 GTE, the chassis is closer to the production model, but the engine had to be modified significantly. The most important thing is that we based the BMW M6 GT3 on an existing car. That was different this time. Because the race car will be in action before the production car, we worked intensively with the design department from a very early point to ensure that were on the same page when it came to the design. That worked very well.”

The GTE class is fiercely competitive, both in the IMSA and the FIA WEC. How big was the challenge, with regard to performance?

Marquardt: “We are certainly up against some tough competition with the BMW M8 GTE, that much is clear. The BMW M6 GTLM, which itself was derived from the GT3 car, served as a reference. But this time we were able to concentrate fully on the demands of the GTE class. As such, many parts have been specifically designed for this car to explicitly align areas such as weight, centre of gravity and aerodynamics with the eventual area of application. We have actually exceeded our own requirements when it comes to the engine and aerodynamics. We have also made big strides with other components, such as the chassis and traction control. This is confirmed by the feedback from the drivers. We will see how this is reflected in the results over the course of the year. The Balance of Performance obviously also plays a big role, however the BMW M8 GTE certainly has great potential.”

Were there specific key moments in the development?

Marquardt: “The special team spirit in the development team will definitely stay with us for a long time. The engineers consistently motivated each other and put a lot of heart and soul into this project. The rollout in Dingolfing was the first highlight. The second step, in which the final chassis and aerodynamics were added to the car, was of similar importance. It was an extremely tight schedule, which led straight into a 24-hour test. We achieved all that as a team with a remarkable group dynamic. I am proud of everyone at BMW Motorsport.”

To what extent does the development work continue after the first race in Daytona?

Marquardt: “After the car has been homologated, there are some areas in which we can, and may, make changes. We can still do some work on the software, in particular. We will also continue to work on aligning the BMW M8 GTE with all its systems, and will integrate all the reference values we have acquired. First of all, however, we are looking forward to the maiden race in Daytona.”