Statement and Presentation by Oliver Zipse, Chairman of the Board of Management of BMW AG, 100th Annual General Meeting in Munich on 14th May 2020 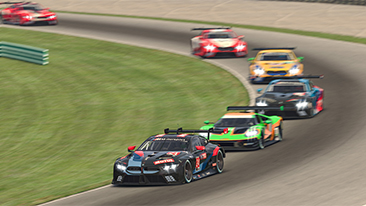 Munich, Germany- May 15, 2020. After recording two victories to start the IMSA iRacing Pro Series, Bruno Spengler (CAN) followed up his sixth-place finish in Mid-Ohio (USA) with a return to the podium on the virtual circuit at Road America (USA). A bold tyre strategy helped the Canadian driver to cross the line second in the BMW M8 GTE. Philipp Eng (AUT) was right behind him in third place. A total of six BMW M8 GTEs reached the top ten. Victory went to Nick Tandy (GBR, Porsche).

The BMW drivers were unable to finish ahead of the competition from Porsche and Ford in the qualifying session on the historic circuit but improved during the race thanks to a cohesive performance. Spengler and John Edwards (USA) were the only drivers to use their pit stops to change just two tyres instead of four, a decision which enabled them to make up a few places. Spengler took good care of his tyres during the final phase and claimed a podium position. Edwards was the third-best BMW driver, finishing in fifth position. Turner Motorsport drivers Robby Foley (USA), Connor De Phillippi (USA) and Nick Catsburg (NED) crossed the finish line in seventh, eighth and ninth places.

Bruno Spengler (#7 BMW M8 GTE, BMW IMSA Team Red, 2nd place): “We knew in advance that competing against such strong opposition would be tougher on this circuit than in previous races. The qualifying results in particular confirmed that. However, choosing a pit stop strategy of just changing the left-hand tyres with the heavier wear allowed us to make decisive progress. The older tyres did not have a detrimental effect on the pace towards the end and I was able to keep hold of second place  All in all, it was a great day and a super result for me and the entire team.”

Philipp Eng (#26 BMW M8 GTE, BMW Team Austria, 3rd place): “With that fourth place in Mid-Ohio and third place here, things are going very well for me but that should not come as a surprise. I have been training unbelievably hard for this race. It involves a crazy amount of work for the entire team and all the drivers. We work really well together on the set-up and driving style. I was ahead of Bruno before the pit stop – and on reflection, if I could reverse the decision to change all four tyres, I would, but everything is always clearer with hindsight. Nonetheless, it was a great performance from all of us. Finishing with a total of six BMW M8 GTEs in the top ten is an excellent result.”