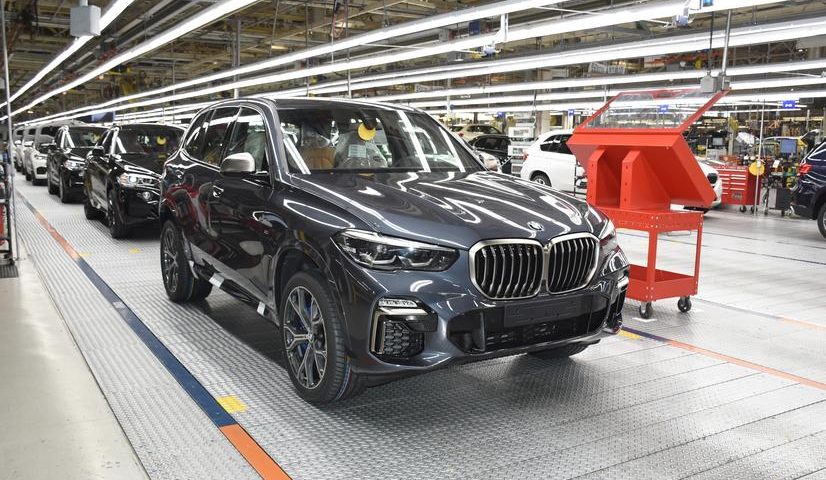 Nearly 20 years of market leadership and the heart of the BMW lineup.Fourth-generation BMW X5 nears production start at Spartanburg, the global center of competence for BMW X family.The BMW X5 accounts for more than half of the 4.4 million vehicles produced at Spartanburg since plant opened in 1994.

Woodcliff Lake, NJ – July 6, 2018… As Americans enjoy the holiday week and prepare for their summer adventures, preparations of a different kind are nearing completion at BMW Plant Spartanburg in South Carolina: the final phases of gearing up for production of the all-new BMW X5, which begins later this summer.

Four generations of leadership.
As the fourth generation of BMW X5, the all-new model joins a proud lineage and history of leadership. When it was introduced nearly 20 years ago, the original BMW X5 launched not only the BMW X model family, but launched the Sport Activity Vehicle (SAV) segment for the industry. Since then, the BMW X5 has firmly established itself as one of the pillars of the BMW model line, selling more than 2.2 million examples world-wide across the first three model generations. In the US, the BMW X5 has ranked in the top three best-selling BMW models every year since 2001. This tremendous success has come with several expansions of BMW Plant Spartanburg – now the largest BMW plant in the world.

BMW’s manufacturing plant in South Carolina is the single largest exporter of automobiles by value in the United States. Since the introduction of the original BMW X5, two of every three vehicles produced were exported for sale to customers outside the US. When considering the Spartanburg-built X3, X4, X5, and X6 together, more than 70 percent of the annual production is shipped to export markets.

Plant Spartanburg.
The size of the workforce has also grown substantially at Plant Spartanburg, from an initial 500 people in 1994 to more than 10,000 people today – with another 1000 expected to join by 2021. A 2017 study by the University of South Carolina finds that for every 10 jobs that are directly generated at a U.S. BMW facility, an additional 90 jobs are created elsewhere in the U.S. economy as a direct result of these BMW jobs.

BMW U.S. purchasing of parts and materials for production at our U.S. plant totaled nearly $6 Billion (USD) in 2017 from more than 300 U.S. supplier companies.

Training at the plant employs a dual apprenticeship training system that combines classroom learning with practical experience. In the past ten years, the BMW Group has invested more than 220 million US dollars in vocational and continued training at its Spartanburg facility, with another 200 million US dollars planned over the next five years. The training programs are run in cooperation with local colleges.

Timeline of the BMW X5, Built in Spartanburg, South Carolina.

What they said then: historical quotes.
“The success of the X5 is directly attributable to the designers of the vehicle, our parts suppliers and the many dedicated and hard working associates who continue to come together and create such a special vehicle.”
– Mr. Josef Kerscher, then-President of BMW Manufacturing, June 8, 2010

“This is a day of great pride for all South Carolinians and the BMW family. It is a testament to the quality of the SC workforce, the supply chain, and to BMW, one of the greatest automobile manufacturers in the world. Now, one million X5s later, BMW is one of the great business success stories in the history of South Carolina. This milestone gives us hope for the future and is a positive sign that through world-class manufacturing our state will prosper will in the years ahead.”
– US Senator Lindsey Graham, June 8, 2010

“We created the X5 to give customers the best of both worlds. With the X5, BMW has given birth to a new category, the Sports Activity Vehicle. The X5 combines legendary BMW performance, styling, luxury and technology with the roominess and versatility of a traditional SUV. Above all, the X5 is nimble and quick, a joy to drive. A true BMW.”
– Tom Purves, then-BMW USA Chairman and CEO, September 23, 1999