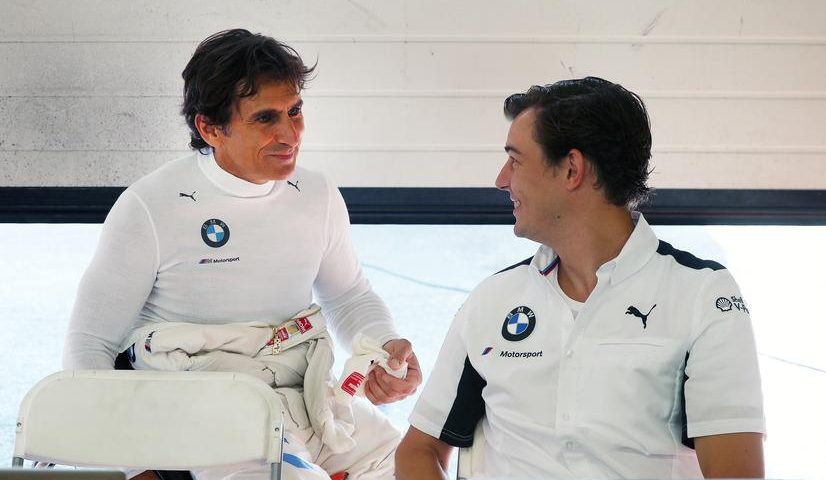 Many modifications in the BMW M4 DTM cockpit allow Alessandro Zanardi to drive without his prostheses.Zanardi to use newly-developed brake system, operated by hand rather than a fixed artificial leg, for the first time.Zanardi at Vallelunga this week for tests.Munich. Alessandro Zanardi’s guest appearance at the DTM race weekend at Misano (ITA) is now just a few weeks away. The 51-year-old Italian is at Vallelunga (ITA) on Tuesday and Wednesday for a series of intensive tests with the BMW M4 DTM as he continues to prepare as meticulously as possible for his outing in Italy. Zanardi must familiarise himself with the many modifications in the cockpit, which will allow him to push the DTM car to its limit without using his prostheses.

Munich, Germany. – Aug. 7, 2018… BMW Motorsport engineers are learning with every car they modify for Zanardi. They have once again developed many technical innovations for his start in the DTM and at the 2019 Daytona 24 Hours (USA), including a hand-operated braking system for the first time. Here is a detailed look at the changes.

When Zanardi makes his guest appearance in the DTM at Misano, he will have a newly-developed hand-operated brake system at his disposal for the first time. This replaces the combination of brake pedal with a permanently attached artificial leg, which Zanardi has used to brake on his previous outings in BMW race cars. The advantage of this new system is that it requires less effort and is thus far easier to operate.

The brake lever is located to the driver’s right, in the centre console area. The brake lines have been extended and laid from the footwell to this lever. As a result, the pedal box, with the throttle, brake and clutch pedals, is no longer necessary. The footwell in Zanardi’s BMW M4 DTM is empty. The large brake cylinder has been adjusted slightly, meaning Zanardi need not apply quite as much pressure by hand as a regular DTM driver must with his foot to achieve the required braking effect. Where a regular driver must apply 100 to 120 kilograms of pressure, a maximum 70 kilograms is sufficient for Zanardi. As well as the size of the brake cylinder, the improved leverage of the handbrake lever also makes the whole braking procedure easier.

For the new system to work, the BMW Motorsport engineers turned the operating principle of the brake cylinder on its head. While the brake pedal in a normal BMW M4 DTM exerts tensile force on the brake cylinder, the handbrake lever in Zanardi’s car applies pressure to the cylinder.

As with every BMW M4 DTM, Zanardi’s car also has a parking brake, which is used to build up preload pressure to allow the fastest possible start. Like his fellow BMW drivers, Zanardi can operate this parking brake via a button on the steering wheel. However, he can also mechanically activate and release the parking brake via a lever on his handbrake. This also allows him to prevent the car from rolling.

In a standard DTM car, the drivers use a hydraulic clutch for the start of the race and for pulling away from the pit lane before the race and following a pit stop. In Zanardi’s car, a fully-automatic centrifugal clutch is used instead. This automatically opens and closes at certain engine speeds and is no longer operated by the driver. The respective engine speeds are defined by BMW Motorsport engineers as part of their meticulous set-up work. For Zanardi, the system has the great advantage that he does not need to use one of his hands to operate a clutch lever.

When necessary, he can move down through the gears perfectly normally with the respective shift paddle. However, as this procedure is usually associated with a braking manoeuvre, for which the right hand is needed, Zanardi can also downshift using a shift paddle on the end of the brake lever.

The system, with which Zanardi accelerates in the BMW M4 DTM, was adopted from the GT cars modified for him in the past. He accelerates by using his fingers to pull on a throttle ring on the rear of the steering wheel. The continuous ring can be operated with both hands, or just with the left or right hand. This plays no role in the way the system functions. The throttle ring is controlled using the same sensors as the standard throttle pedal.

The steering wheel, including the throttle ring, is basically the same as those used in the GT cars that Zanardi has driven in the past. Only the buttons have been adjusted for his guest appearance in the DTM. For example, a DRS button has been added. Meanwhile, the knobs towards the bottom of the steering wheel, which are used to configure driver aids such as ABS in GT cars, have no function in the BMW M4 DTM.

Note to editors:
In the coming weeks leading up to Zanardi’s guest appearance at Misano, we will release several features regarding technology, safety and other topics.