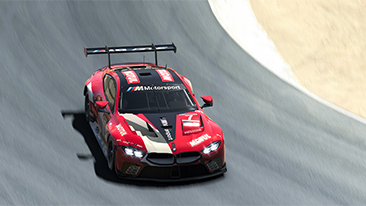 Munich, Germany- April 16, 2020.. First Laguna Seca (USA), next the Nürburgring-Nordschleife (GER) – and then the virtual Formula E test round: BMW works drivers have three big sim racing events ahead of them over the coming days. During Thursday night into Friday, several BMW drivers will contest the second round of the IMSA iRacing Pro Series. That will be followed on Saturday by the third round of the Digital Nürburgring Endurance Series powered by VCO, which is also contested by a large BMW squad. After that, the ABB FIA Formula E Championship launches its virtual season with a test round on the Monaco (MON) track. All the races will be streamed live online on various channels, including those of BMW Motorsport.

IMSA iRacing Pro Series – round 2, Laguna Seca.
The IMSA iRacing Pro Series is the virtual version of the IMSA WeatherTech SportsCar Championship. The first sim race of the series, the ‘IMSA Sebring SuperSaturday’ race at the end of March, finished with a one-two-three result for the MOTUL BMW M8 GTE. On the digital version of the ‘Sebring International Raceway’ (USA), Bruno Spengler (CAN) won, followed by his BMW works driver colleagues Nick Catsburg (NED) and Jesse Krohn (FIN). These three drivers, along with a few other BMW works drivers, will take to the track in the MOTUL BMW M8 GTE again for the second round, which gets underway at 18:00 Eastern Time (midnight CEST). This time, drivers will take on the digital version of the Californian ‘Laguna Seca Raceway’ (USA).

Like in the real-life IMSA series, BMW Team RLL drivers are also competing in the sim version. Spengler has joined forces with Connor De Phillippi and Colton Herta (both USA) for BMW IMSA Team Red. Krohn and John Edwards (USA) are representing BMW IMSA Team Black, together with Catsburg. BMW Team RLL engineers are also involved in the preparatory discussions for the sim race.

Philipp Eng (AUT) will compete in Team Austria colours. Several customer teams will also be representing BMW at the virtual Laguna Seca. The Turner Motorsport team will field IMSA regular driver Robby Foley (USA). One of the AIM Vasser Sullivan team’s three BMWs will be driven by New Zealand’s Shane van Gisbergen, one of the stars of the Australian Supercars Championship. No fewer than 20 BMW drivers overall have registered in the field of 50 entrants for the second round of the IMSA iRacing Pro Series.

Digital Nürburgring Endurance Series powered by VCO – round 3.
Eng, Spengler and Krohn go straight into the third round of the Digital Nürburgring Endurance Series powered by VCO at the Nürburgring-Nordschleife (GER) on Saturday. In round two, two weeks ago, Eng and the BS+COMPETITION team secured third place on the podium. This Saturday sees Eng share the wheel of the #189 BMW Z4 GT3 with his team-mates Alexander Voß and Laurin Heinrich (both GER) once again. Spengler will again compete for BMW Bank. The other drivers of the distinctive black #107 BMW Z4 GT3 are Nils Koch and Kay Kaschube (both GER). Krohn will be representing the VRS Coanda Simsport team again.

It goes without saying that BMW Team Green Hell, with the two BMW works drivers Martin Tomczyk and Jens Klingmann (both GER), will not be missing from the starting grid of the third race. BMW Junior Team, made up of Max Hesse (GER), Neil Verhagen (USA) and Dan Harper (GBR), will also be taking part again and gaining more experience of sim racing and the characteristics of the Nürburgring-Nordschleife. BMW M Motorsport customer racing team Walkenhorst Motorsport will field two cars. A total of eight BMW Z4 GT3 will compete.

The third round of the DNLS powered by VCO gets underway at 13:00 local time on Saturday.

Formula E: Virtual season launch with a test round.

This Saturday, after the DNLS race, the virtual season of the ABB FIA Formula E Championship will get underway. On a total of nine Saturdays in a row, sim races of the first fully-electric Formula car race series will take place on the rFactor 2 platform. Formula E is joining forces with UNICEF. The ‘Formula E Race at Home Challenge’ will raise funds for the global fight against the coronavirus. This Saturday gets things going with a test round, which will give the drivers and organiser time to adjust to the new format. The Monaco track will be used for the test. True to the original, sim versions of the BMW iFE.20, and the two BMW i Andretti Motorsport drivers Maximilian Günther (GER) and Alexander Sims (GBR) will be involved. “I’m looking forward to competing in races again during my time at home,” says Sims. “I have to admit that I haven’t had any sim racing experience yet so my expectations aren’t all that high – other than that, hopefully I will have a lot of fun.”

BMW works driver quotes ahead of the sim races at Laguna Seca and the Nürburgring-Nordschleife.

Philipp Eng: “The IMSA race will be really special for me because I will be competing as Team Austria in a BMW M8 GTE, which will be in the colours of my home country of Austria. I’m really looking forward to it. While I will be competing in this race alone, I will have the pleasure of racing alongside the two top sim racers Laurin Heinrich and Alexander Voß in the BMW Z4 GT3 once again at the Nürburgring-Nordschleife. I am really motivated to bring home the second podium in a row for BS+COMPETITION. We might even move up a place this time.”

Bruno Spengler: “I’m really looking forward to these two races. There is a really high level of competition in the two events. It’s great that the IMSA series, where I race in real life, has launched this kind of sim championship and that we can get involved like this. I have a packed schedule with the IMSA race and the next race at the Nürburgring-Nordschleife. I’m still gaining experience on the virtual Nordschleife, but it really means a lot to me that after so many shared years in the DTM, I now get to compete on the Nordschleife for BMW Bank in the BMW Z4 GT3 so I will be kept really busy over the next few days, but I have fantastic challenges ahead of me.”

Jesse Krohn: “It is another busy week in the simulator. Preparing for the IMSA race at Laguna Seca is really intensive. I’m really looking forward to it; it’s going to be a great race. I can imagine that everyone is practising a lot because there is no limit on testing so the level of competition will be extremely high. It’s important to do well in qualifying and then to be consistent and not make any mistakes in the race. I have also been preparing for the third round at the Nürburgring-Nordschleife with my Finnish friend Martti Pietilä. We drove a four-hour preparation race together and that went well. I’m looking forward to both events. After the IMSA race, I will have to quickly get used to driving the BMW Z4 GT3 on the Nordschleife. I will do my best and try to get the best result possible in both races.”

Sim racing trivia.
In the current situation, simulator racing is becoming increasingly popular. During sim races, drivers sit in their race simulators in their own homes, so in races with virtual driver changes, the driver hands the car over to his team-mate, who is located in another city, country or even on a different continent. The physical demands – apart from the g-forces – are almost as high as in real-life racing cars. In the event of an accident, the car has to return to the pit for repairs and then wait for a period that is in line with the damage before being allowed back onto the track. Race control can also award a time penalty.

The special features of sim racing include pro racing-drivers from real-life motorsport being able to compete alongside professional sim racers and there is a real closeness to the fans. They can follow the action live online and via various social media channels, for example, on the BMW Motorsport Facebook channel. The drivers also get their fans involved via their social channels and in the DNLS powered by VCO there is even a digital press conference after each race. An increasing number of major race series in which BMW Motorsport is represented are now holding their own digital championships. These include the ABB FIA Formula E Championship and the IMSA WeatherTech SportsCar Championship.

Note to editors:
We are aware of the current difficult situation, but decided to keep on providing you with regular press releases in the coming weeks and months. We will be reporting on the adventures of our BMW works drivers in sim racing as well as releasing interviews and background stories primarily on the subject of technology within BMW Group Motorsport.