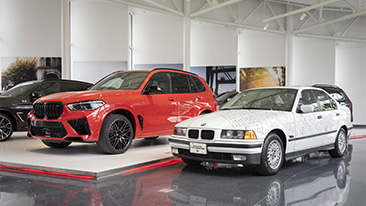 Spartanburg, S.C- June 11, 2020…  BMW Manufacturing achieved another milestone on June 4 with production of the five millionth BMW built in the United States. The historic vehicle is a Toronto Red Metallic BMW X5 M Competition equipped with a 617-horsepower M TwinPower Turbo V-8 engine, Silverstone Full Merino Leather interior and 21/22-inch M Star-spoke bi-color wheels. Due to its historic significance, this X5 M Competition will remain at the factory and become part of the BMW historic collection.

“You cannot be successful in business if you do not have great products and great people. This BMW X5 M Competition is a symbol of the success of our products and the commitment and dedication of our associates and supplier network,” said Knudt Flor, president and CEO of BMW Manufacturing. “Every BMW X5 in the world comes from Plant Spartanburg. We are proud to call South Carolina home!”

“More than half of the BMW vehicles we sell in the U.S. are built right here in the U.S., so we cannot overstate the importance of Plant Spartanburg to our sales network,” said Bernhard Kuhnt, president and CEO, BMW of North America.  “BMW Group has long considered the United States to be our second home and we are proud to say that the U.S. is in fact home to the biggest BMW plant in the world.  We congratulate our colleagues on this historic achievement.”

“BMW changed the very fabric of our state’s economy when it decided to locate in South Carolina nearly three decades ago,” said Gov. Henry McMaster. “That this great company built its five millionth American-made vehicle in Spartanburg should be a source of great pride for our people and a reason for celebration. It’s one more example of South Carolinians sharing in the success of a company that has become an integral part of our state because of its dedication to our people.”

The South Carolina plant also celebrated two important milestones last year – 25 years of production and a record year of 411,620 vehicles built. In 2019, Plant Spartanburg led the nation in automotive exports by value for the sixth consecutive year, with a total export value of approximately $9.6 billion. Nearly 70 percent of the plant’s total production was exported from 2010 – 2019.

BMW Manufacturing is the global center of competence for BMW Sports Activity Vehicles and Coupes. Over the years, through continuous investment which now totals more than $10.6 billion, the factory has been expanded six times to more than 7 million square feet. The plant employs more than 11,000 people who build BMW X3, X4, X5, X6 and X7 models for the U.S. market and the world.