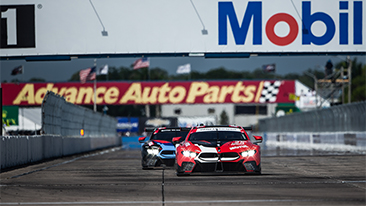 Munich, Germany – March 21, 2021. . .BMW Team RLL has claimed a double podium at the Twelve Hours of Sebring (USA). After 333 eventful laps of racing, the #25 MOTUL BMW M8 GTE, driven by Connor De Phillippi (USA), Bruno Spengler (CAN) and Philipp Eng (AUT), crossed the line second in the GTLM class. John Edwards (USA), Jesse Krohn (FIN) and Augusto Farfus (BRA) completed the podium with third place in the #24 MOTUL BMW M8 GTE. The classic race in the US state of Florida was the second major endurance event of the season in North America.

Starting drivers De Phillippi and Krohn each moved up one place after beginning the race from third and fourth positions. That was followed by twelve eventful hours of racing on the Sebring International Raceway, with numerous full course yellows. The #25 MOTUL BMW M8 GTE led the GTLM class for a time before falling back a little to second place in the final stages. The #24 car was also in a promising position before slipping down a lap due to a minor pit stop fire around two hours before the finish and then returning to the track in fourth place.

The closing stage proved to be full of drama. During the battle for the lead, De Phillippi made contact with the leading GTLM car eight minutes before the end and received a drive-through penalty. Despite that he was able to hold on to second place in the class with the #25 car. Krohn moved up from fourth to third place on the final lap in the #24 car.

The No. 25 M8 GTE led the race at the four-hour and eight-hour marks, and with second place at the checkered flag won the Michelin Endurance Cup for this event.
In the GTD class, the Turner Motorsport #96 BMW M6 GT3 secured eighth place. Bill Auberlen, Robby Foley (both USA) and Aidan Read (AUS) shared driving duties. The trio had lost a substantial amount of time during repairs in the early stage of the race and worked their way back up as the race progressed.

The IMSA Michelin Pilot Challenge race took place on Friday. After two hours of racing, Auberlen and Dillon Machavern (USA) finished third in the Turner Motorsport #95 BMW M4 GT4 to secure a spot on the podium. The duo of Greg Liefooghe and Sean Quinlan (both USA) finished fifth in the #43 BMW M4 GT4 of Stephen Cameron Racing. Robby Foley and Vincent Barletta (both USA) secured seventh place in the #96 BMW M4 GT4 from Turner Motorsport.

The third endurance race of the season for BMW Team RLL, the 6-hour race at Watkins Glen (USA), is scheduled for 27th June.

Quotes after the Twelve Hours of Sebring:

Bobby Rahal (Team Principal BMW Team RLL): “The guys did a great job. It was unfortunate for the #24 and we still don’t know what exactly happened at the pit stop with the fire but thankfully nobody got hurt and we were able to get going again. The final minutes were unlucky. When you have the chance to win the Twelve Hours of Sebring you’ve got to go for it. It didn’t quite work out, but you can’t blame anybody; everybody was aggressive at the end. It was a shame, but we gave our best shot and today it looked pretty good for a while. We got a good gap to the Corvette and the Porsche but then the yellows came out and that made it a whole new race again towards the end. We would have liked to win this race, especially this race, but with P2 and P3 we are now looking forward to the next one at Watkins Glen.”

Connor De Phillippi (BMW Team RLL, #25 MOTUL BMW M8 GTE, 2nd place GTLM class): “I think we can be really proud of our performance today. We knew we had to maximise literally everything into this car and this is exactly what we did. We put ourselves in the position to fight at the end. I could taste the win, tried to battle with the leader. I saw an opportunity and went for it, but it didn’t work. We still came home second and third for BMW. It’s great to be on the podium. It was nice to come back here and show that we have the speed. It’s a good result and good points for BMW and now we will try to get the win at the six-hour race.”

Bruno Spengler (BMW Team RLL, #25 MOTUL BMW M8 GTE, 2nd place GTLM class): “What a race. We were competing for the lead pretty much the whole race. At times, it was really intense and felt like a sprint race. After the restarts, behind each other and chasing each other, it was a lot of fun. We fought until the end and Connor saw a gap and went for it. Unfortunately, there was a contact and for sure it was not intentional from his side, he just tried to go for the win, but we still finished in P2. It’s a great result for us, for the whole team. The team has been working awesomely hard to give us such a good car here at Sebring so we can be happy about this great result.”

Philipp Eng (BMW Team RLL, #25 MOTUL BMW M8 GTE, 2nd place GTLM class): “I am obviously very happy about the podium. It is such a fantastic race and such a fantastic racetrack. In the end I think Connor just relied on his instinct. The outcome is what it is, but I would not have done it any differently. Unfortunately, we missed out on the win, but it is still a double podium for BMW.”

Jesse Krohn (BMW Team RLL, #24 MOTUL BMW M8 GTE, 3rd place GTLM class): “It was really bad luck. Two years in a row, we fell out of the battle at the end. Unfortunately, the yellow came too late, so we were stuck driving one lap behind the other guys. There is not much you can do. Fortunately, some things then happened at the front and we came out with P3, but it wasn’t really what we were looking for and what we could have done.”

John Edwards (BMW Team RLL, #24 MOTUL BMW M8 GTE, 3rd place GTLM class): “My sister sent me a text and it said ‘you really rose from the ashes’ and I think that is true tonight. A surprising podium on the last lap as the Corvette was having problems. So, we take it and take the points. But overall it was a disappointing day as we were very competitive. Together with the other car, we were running in P1 and P2 with a couple of hours to go and it looked like we could have a shot for both cars to stay there. We then had the fire but most importantly everyone is okay.”

Augusto Farfus (BMW Team RLL, #24 MOTUL BMW M8 GTE, 3rd place GTLM class): “It’s a shame that we had the fire. Looking at how the race ended I think we would have been right there, and we would have been able to go for the victory, but besides that I think it’s a shame what happened to Connor. We all had a very good race, trouble free apart from the incident in the pit lane in which luckily no one got hurt. Another podium, so I think there is a reason to celebrate.”