BMW Launches #DRIVETOGLORY Campaign to Kick Off One-Year Countdown to the 2020 Ryder Cup at Whistling Straits in Kohler, WI. 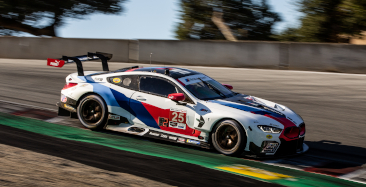 Woodcliff Lake, N.J. – Sept. 15, 2019… BMW Team RLL came up 20 seconds short of delivering a third consecutive GTLM class victory at WeatherTech Raceway Laguna Seca, its two BMW M8 GTE racing cars finishing second and fifth in today’s two-hour-and-forty-minute IMSA Monterey SportsCar Championship race. The runner-up finish was scored by the No. 24 BMW M8 GTE, driven by John Edwards and Jesse Krohn, who started from the pole position and completed 114 laps of the 2.223-mile, 11-turn circuit during the event and taking the checkered flag 20 seconds behind the No. 66 Ford GT. The result is the second 2nd place finish of the season for the duo (CTMP) and the 77th for the BMW Team RLL program. Tom Blomqvist and Connor De Phillippi finished fifth in the No. 25 BMW M8 GTE. The pair ran consistently in the top-three until passed in the final ten minutes of the race by both Corvettes which were running a three-stop strategy resulting in much fresher Michelin tires at the end of the race.

Both Krohn and Blomqvist drove strong opening stints, Krohn leading the race for the majority of laps. Blomqvist raced in third position, pitting on the 33rd lap to hand off the No. 25 M8 GTE to Connor De Phillippi with one-hour-and-fifty-two-minutes remaining in the race. Krohn entered the pits three laps later from the lead, the last in class to make the first stop. John Edwards took over the controls of the No. 24 M8 GTE with only seven minutes remaining in the opening hour of the contest.

At the mid-point of the race Edwards raced in the second position, De Phillippi only seconds behind him in third. The second and final pit stops occurred on lap 72 for the No. 25 M8 GTE and lap 74 for the No. 24 M8 GTE with both De Phillippi and Edwards remaining in their respective cars.

In the final ten minutes of the race the opportunity for a double-podium finish evaporated as both Corvettes were able to pass a defending De Phillippi, the result of the their three-stop strategy and fresher tires in the closing stages of the race. Connor’s defense of his position for as long as possible allowed the sister No. 24 car to preserve its podium finish.

The final round of the 2019 IMSA WeatherTech SportsCar Championship, the Motul Petit Le Mans, will take place on Saturday, Oct. 12. The first three hours of the race will be broadcast on NBC beginning at 12:00 p.m. ET. The final five hours of the event will be broadcast on NBCSN beginning at 5:30 p.m. ET. Follow us on Twitter @BMWUSARacing for news from the pit box and get live scoring and in-car camera views at IMSA.com.

“Jesse did a very good job after he experienced a momentary shut-off.” said Bobby Rahal, Team Principal. “It allowed the Ford to get passed but he recovered and got the job done. Although we had a good pace, the Ford was just better today. You usually get the breaks in traffic when you are leading your class and you don’t when you are second or third. Now, it’s on to Petit Le Mans and work begins to finish the season just as we started it, with a victory.”

John Edwards, driver No. 24 BMW M8 GTE (P2): “It feels great to be back on the podium and be back in contention. Especially after the previous races where we struggled with our pace. We regrouped, made the necessary changes to the cars and they paid off. Last year, our sister car won here on a great fuel strategy so it is satisfying to be able to compete with the same pace as the other teams.”

Jesse Krohn, driver No. 24 BMW M8 GTE (P2): “Good day overall. Slight hiccup during my stint when I lost all power and that ultimately cost us the lead and may have cost us the win. It’s tough to know here because traffic plays such a big part but if you are the first car going through the traffic you most likely gain so losing that lead early-on was a bad blow for us. Overall, the team executed very well, the car was working pretty well and we came away with P2. Considering the issue we had, we can be very happy with our result!”

Tom Blomqvist, driver No. 25 BMW M8 GTE (P5): “Very close at the end and to come so close to the podium and not get the result is a bit disappointing. The guys did a great job this weekend but the Corvettes just managed to get by at the end. Connor did a very commendable job keeping them at bay as long as he did and that helped John and the entire team.”

Connor DePhillippi, driver No. 25 BMW M8 GTE (P5): “It was a difficult race with tire degradation issues at the end. I was just trying to hold off the Corvettes at the end but I just could not keep them behind me long enough. We were able to hold them off enough to give the No. 24 car a good gap and keep it on the podium however. I am very happy with our effort and now we will try to get both cars on the podium at Petite Le Mans.”

BMW of North America, LLC has been present in the United States since 1975. Rolls-Royce Motor Cars NA, LLC began distributing vehicles in 2003. The BMW Group in the United States has grown to include marketing, sales, and financial service organizations for the BMW brand of motor vehicles, including motorcycles, the MINI brand, and Rolls-Royce Motor Cars; Designworks, a strategic design consultancy based in California; technology offices in Silicon Valley and Chicago, and various other
operations throughout the country. BMW Manufacturing Co., LLC in South Carolina is the BMW Group global center of competence for BMW X models and manufactures the X3, X4, X5, X6 and X7 Sports Activity Vehicles. The BMW Group sales organization is represented in the U.S. through networks of 348 BMW passenger car and BMW Sports Activity Vehicle centers, 148 BMW motorcycle retailers, 123 MINI passenger car dealers, and 38 Rolls-Royce Motor Car dealers. BMW (US) Holding Corp., the BMW Group’s sales headquarters for North America, is located in Woodcliff Lake, New Jersey.

BMW’s partner, Rahal Letterman Lanigan Racing, based in Hilliard, Ohio and co-owned by three-time IndyCar Champion and 1986 Indianapolis 500 winner Bobby Rahal, former CBS Late Show host David Letterman and Mi-Jack co-owner Mike Lanigan, has been competing for almost three decades. Prior to the start of their 28th season of competition in 2019, the team had compiled 45 victories, 56 poles, 171 podium finishes, three series championships (1992, 2010, 2011) and claimed an Indianapolis 500 victory (Buddy Rice in 2004). In 2009 the team joined BMW of North America to campaign the new BMW M3 in the American Le Mans Series. The following year the team won both the Manufacturer and Team Championships in the GT category and swept all three GT titles – Manufacturer, Team and Driver – in 2011. In 2012, the team finished second in the Team Championship and third in the Manufacturer Championship and in 2013, the team finished second in the Driver, Team and Manufacturer Championship. Since 2014, BMW Team RLL has competed in the GTLM class of the IMSA WeatherTech SportsCar Championship with a two car program and has brought their total to 19 wins, 26 poles and 74 podium finishes as well as a second place finish in the Manufacturer, Team and Driver championships in 2015 and 2017. The 2018 debut of the BMW M8 GTE brought two wins, three poles and six podiums of that total.