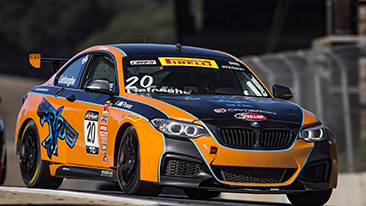 Woodcliff Lake, N.J. – Oct. 17, 2017 . . . BMW drivers powered The Ultimate Driving Machine® to the Pirelli World Challenge Touring Car class Manufacturer’s title behind record BMW entries throughout the 2017 season. Double digit entries of BMW M235i Racing cars competed in every round of the championship with four BMW drivers sharing seven of the 12 round victories contested across North America. With the BMWs so equally prepared and the intramural competition so intense, BMW drivers finished in six of the top-10 positions of the Driver’s Championship. The title was earned by Audi driver Paul Holton.

Greg Liefooghe, of San Francisco, Calif., driving the No. 20 Stephen Cameron Racing M235i Racing, was the top-finishing BMW driver in the class of 2017, finishing runner-up in the Driver’s Championship with four season victories and two second place finishes in the season-ending Rounds 11 and 12 at Mazda Raceway Laguna Seca.

“I certainly want to thank Stephen Cameron Racing for a great year,” said Liefooghe. “If it were not for a forgetful weekend at Lime Rock Park where we only scored three points things could have turned out differently. The M235i Racing is a surprising package. On paper you would not think it is as quick as it actually is. The car generates incredible grip, is well-balanced and is quite easy to drive fast. BMW Motorsport delivers a racing car that is well sorted allowing you to really focus on driving.”

“Speaking on behalf of everyone at BMW of North America and BMW Motorsport,” Victor Leleu, BMW of North America Motorsport Manager. “I want to thank every BMW M235i Racing driver in Pirelli World Challenge competition this season for helping BMW to win the Touring Car Manufacturer’s Championship. Congratulations to Greg Liefooghe and Stephen Cameron Racing for finishing second in the Driver’s and Team Championship as well as Nick Wittmer, Toby Grahovec, Mason Fillippi, Anthony Magagnoli and Ari Balogh for each being one of an outstanding group of six BMW drivers in the top-10. BMW of North America is very proud to have grown our customer racing program substantially with, last year, the introduction of the M235i Racing. On a few occasions this season we’ve had more than 20 cars on track and that is quite a testament to the program and our customers. Next year we will begin to write the next chapter of our customer racing program with the all-new M4 GT4 and look forward to even more BMW teams and drivers in both PWC and IMSA competition.”