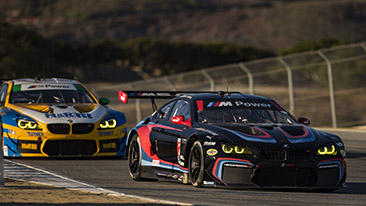 Running at the sharp end of the GTLM field for the entire 15-minute qualifying session both Edwards, driving the all-black liveried No. 24 BMW M6, and Sims, in the No. 25 M6, each took a turn at the top spot, but when the dust settled, Edwards, who shares the No. 24 car with Martin Tomczyk, ran a lap of 1:22.177 minutes around the 2.238-mile, 11-turn Laguna Seca circuit to score the third starting position. Sims, literally a fraction of a second behind, with a 1:22.178 minute lap, will start the No. 25 M6 from the fourth spot. Both BMWs qualified only a quarter of a second from the pole winning time of the No. 62 Ferrari. Sims and co-driver Bill Auberlen are fighting for the GTLM driver’s championship, currently standing second in points. Edwards and Tomczyk stand seventh in driver points.

“Last year we struggled here,” said Bobby Rahal, Team Principal. “One year later we are certainly in the hunt. Would we like to qualify 1-2? Sure, but we will start from a strong 3-4 after a total team effort. Both BMWs are so close in performance it’s a good thing one is black and one is white or it would be difficult to tell them apart.”

John Edwards, driver No. 24 BMW M6 GTLM (P3): “Through the three practice sessions we made big changes to both cars. We split our strategy in the last session before qualifying. The No. 25 M6 was quicker so we changed our set-up to theirs for qualifying and it paid off. One thousandth of a second apart underlines the engineering effort behind this team. We still have a bit of work to do, but we are certainly going in the right direction.”

Alexander Sims, driver No. 25 BMW M6 GTLM (P4): “I believe we can be very pleased with our effort this afternoon. The No. 25 car was strong, but the nature of this circuit makes it difficult to get one lap 100% right. We’ve certainly come a long way from the first practice session.”