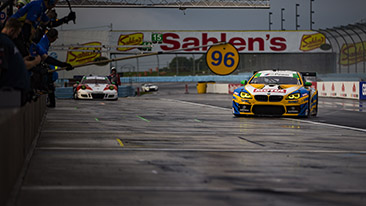 Woodcliff Lake, N.J. – July 1, 2017… BMW Team RLL continued the excellent performance shown in the last round of the 2017 IMSA WeatherTech SportsCar Championship by qualifying second and third for tomorrow’s Sahlen’s Six Hours of The Glen. BMW Motorsport drivers Alexander Sims and Martin Tomczyk made the best of their first race weekend at the classic 3.4-mile, 11-turn Watkins Glen International to qualify in the first and second rows of the very competitive GTLM class. Sims drove the No. 25 M6 he shares with Bill Auberlen to his season’s-best second place qualifying effort with a lap time of 1:42.813 minutes. Just .068 seconds behind, Martin Tomczyk qualified the No. 24 M6 in the third spot with a 1:42.881 minute lap. He will co-drive with John Edwards, the Round Four pole winner at the Circuit of the Americas. The class pole went to Joey Hand in the No. 66 Ford GT with a 1:42.507 minute lap. The entire GTLM class was separated by only .736 seconds.

“I’m very pleased we have continued to see the competitiveness we showed at COTA,” said Bobby Rahal, Team Principal. “Our M6 likes long, fast and flowing corners and Watkins Glen is exactly that. It is always a tough race, but we’re starting from a good place and look forward to a positive day.”

Alexander Sims, driver No. 25 BMW M6 GTLM (P2):“We ran a strong session and was only topped by Joey (Hand) at the very end. Where you start a six-hour race is not absolutely critical, but I am pleased for my first GTLM front row start and look forward to a good race tomorrow. Watkins Glen is an awesome place. It seems to suit the M6 nicely.”

Martin Tomczyk, driver No. 24 BMW M6 GTLM (P3): “Both of our BMWs performed quite well today, posting strong efforts. I am looking forward to six hours at Watkins Glen. I like the circuit more and more with each lap.”

The Sahlen’s Six Hours of The Glen takes the green flag at 10:10 a.m. ET Sunday, July 2. FOX Sports 1 will broadcast the race live beginning at 10:00 a.m. ET. Follow BMW Team RLL on Twitter at @BMWUSARacing for “from-the-pit-box” updates all weekend.

BMW Group In America
BMW of North America, LLC has been present in the United States since 1975. Rolls-Royce Motor Cars NA, LLC began distributing vehicles in 2003. The BMW Group in the United States has grown to include marketing, sales, and financial service organizations for the BMW brand of motor vehicles, including motorcycles, the MINI brand, and the Rolls-Royce brand of Motor Cars; DesignworksUSA, a strategic design consultancy in California; a technology office in Silicon Valley and various other operations throughout the country. BMW Manufacturing Co., LLC in South Carolina is part of BMW Group’s global manufacturing network and is the exclusive manufacturing plant for all X5 and X3 Sports Activity Vehicles and X6 and X4 Sports Activity Coupes. The BMW Group sales organization is represented in the U.S. through networks of 342 BMW passenger car and BMW Sports Activity Vehicle centers, 152 BMW motorcycle retailers, 127 MINI passenger car dealers, and 36 Rolls-Royce Motor Car dealers. BMW (US) Holding Corp., the BMW Group’s sales headquarters for North America, is located in Woodcliff Lake, New Jersey.

Journalist note: Information about BMW Group and its products in the USA is available to journalists on-line at www.bmwgroupusanews.com and www.press.bmwna.com.
www.bmwgroup.com