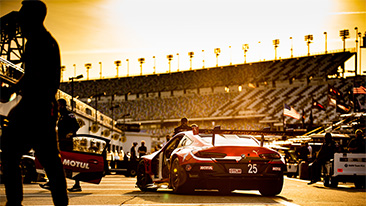 Woodcliff Lake, N.J. – January 28, 2021… As BMW Team RLL makes its final preparations for this weekend’s 59th running of the Rolex 24 At Daytona, while seeking a third consecutive win, we wanted to take time and share some thoughts and quotes with you.

BMW M sales 2020 – “Win on Sunday . . .” Worldwide sales of BMW M automobiles increased by some six percent in 2020 to 144, 218 units, with the United States continuing to be the most important M market in the world. In 2021, BMW M will introduce the sixth generation BMW M3 and an all-new BMW M4. This weekend, lucky Rolex 24 fans will get a chance to see the brand new 2022 BMW M5 CS, the most powerful and quickest production car ever made designed by BMW.

BMW Endurance Challenge at Daytona – Watch BMW customer racing teams and the BMW M4 GT4 take on the very competitive field in this kick-off to the Michelin Pilot Challenge Series. Green flag is at 1:30 pm ET on Friday, January 29th. The official pace car for the race will be the brand new 2022 BMW M5 CS and it will be joined by the M8 Coupe Safety Car.

Forza Alex – Everyone at BMW continues to hope for the recovery of our friend Alex Zanardi who was injured in a handbike accident last June. Alex drove with BMW Team RLL in the 2018 Rolex 24 At Daytona and we continue to be inspired by one of the world’s true heroes every day. #ForzaAlex

Bobby Rahal – 40 years ago, in 1981, Bobby shared the 24 Hours of Daytona victory with Bob Garretson and Brian Redman. BMW Team RLL is racing for a third consecutive Rolex 24 GTLM class victory this weekend.

The Turner Motorsport livery story – The sincerest form of flattery – “When I was BMW and SCCA club racing I had one white E30 BMW and one black E30 BMW. They looked fine, but the black car did not photograph very well and everyone else seemed to have a white race car. I wanted cars that would stand out in every condition. The British Touring Car Championship was very popular in the late-1990s so I rented the 1996 championship tape and popped it into the VCR to see what I could learn. I noticed immediately that the yellow and blue of the Renault Laguna livery stood out anywhere and everywhere. I cut out a picture of the Renaults and brought it to my painter. He picked out a Mazda sunburst yellow and a Ford truck blue, I think. Over the years the blue has gotten a bit darker and the yellow has stayed pretty much the same and, most importantly, the Turner Motorsport livery has become a fan favorite. Of course, at the Rolex 24 we will run a red, white, and blue livery for Liqui-Moly, but I think that only gives them more exposure when we take such a departure.”

Timo Glock – First impressions – “To be at Daytona feels very much like it did for me 15 or 16 years ago when I came to America to race with Champ Car. The atmosphere here in the States is totally different than in Europe and walking into the Daytona paddock the feeling came right back to me. I’ve never been to Daytona before. The grandstand is amazing. I can’t imagine what it would look like packed with people. This will be my second ever 24-hour race and the team has made me feel right at home. The M8 speaks a very clear language so it has been very comfortable for me to get up to speed and know I can contribute.”

Augusto Farfus’ helmet – Mucho Gusto! – “It is an honor to come again to Daytona. I have been here with the BMW Z4, the John Baldessari Art Car BMW M6, and two very good years with wins here in the BMW M8. This year I am celebrating 30 years in motorsport and I will run with a helmet design that honors the helmet I wore in my very first race. To win for a third consecutive year will be very difficult because the competition is so strong, but what will I do if I am lucky enough to win a third Rolex watch? I will give one to my wife, one to my daughter and one to my son.”

Bill Auberlen – Now serving 63 – “I am always amped up for the Rolex 24. Every driver wants this win. This year though I feel that the pressure is off. Not for the win. That pressure is always there, but last season, starting at Daytona there was the Race to 61 and to get the most victories in IMSA history. I knew a lot of folks were counting on me and it was something I really wanted, especially for my friends at BMW. We got win number 61 and 62 last year and I am very humbled to have received the congratulations of so many in this sport.”

BMW Group in America
BMW of North America, LLC has been present in the United States since 1975.  Rolls-Royce Motor Cars NA, LLC began distributing vehicles in 2003.  The BMW Group in the United States has grown to include marketing, sales, and financial service organizations for the BMW brand of motor vehicles, including motorcycles, the MINI brand, and Rolls-Royce Motor Cars; Designworks, a strategic design consultancy based in California; technology offices in Silicon Valley and Chicago, and various other operations throughout the country.  BMW Manufacturing Co., LLC in South Carolina is the BMW Group global center of competence for BMW X models and manufactures the X3, X4, X5, X6 and X7
Sports Activity Vehicles. The BMW Group sales organization is represented in the U.S. through networks of 348 BMW passenger car and BMW Sports Activity Vehicle centers, 144 BMW motorcycle retailers, 119 MINI passenger car dealers, and 38 Rolls-Royce Motor Car dealers.  BMW (US) Holding Corp., the BMW Group’s sales headquarters for North America, is located in Woodcliff Lake, New Jersey.

Rahal Letterman Lanigan Racing
BMW’s partner, Rahal Letterman Lanigan Racing, based in Hilliard, Ohio and co-owned by three-time IndyCar Champion and 1986 Indianapolis 500 winner Bobby Rahal, former CBS Late Show host David Letterman and Mi-Jack co-owner Mike Lanigan, has been competing for three decades. Prior to the start of their 30th season of competition in 2021, the team had compiled 54 victories, 65 poles, 213 podium finishes, three series championships (1992, 2010, 2011), claimed two Indianapolis 500 victories (Buddy Rice in 2004, Takuma Sato in 2020) and two Rolex 24 at Daytona victories. In 2009 the team joined BMW of North America to campaign the new BMW M3 in the American Le Mans Series. The following year the team won both the Manufacturer and Team Championships in the GT category and swept all three GT titles – Manufacturer, Team and Driver – in 2011. In 2012, the team finished second in the Team Championship and third in the Manufacturer Championship and in 2013, the team finished second in the Driver, Team and Manufacturer Championship. Since 2014, BMW Team RLL has competed in the GTLM class of the IMSA WeatherTech SportsCar Championship with a two-car program and has brought their total to 22 wins – including the 2019 and 2020 Rolex 24 at Daytona endurance races, 28 poles and 88 podium finishes prior to the start of the 2021 season. The team earned second-place finishes in the Manufacturer, Team and Driver championships in 2015 and 2017 and was the 2020 Michelin Endurance Cup champions.