BMW i Ventures Invests in GenXComm to Increase Speed and Lower Cost of 5G Rollout. 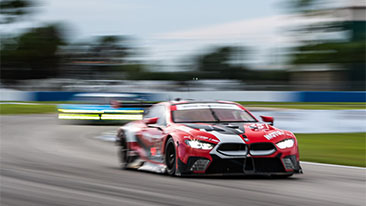 Woodcliff Lake, N.J. – July 29, 2020 . . . BMW Team RLL is planning a renewed attack on the IMSA WeatherTech SportsCar GTLM class championship beginning at this weekend’s IMSA Championship SportsCar Weekend at Road America, in Elkhart Lake, Wis. The race will see the BMW M8 GTE on its best footing since the Rolex 24 At Daytona in January – a race won by BMW Team RLL for the second consecutive year.

BMW Team RLL has scored three wins and five additional podium finishes at Road America since the program’s inception 12 years ago, including the team’s very first victory in 2009.

“We have always done pretty well at Road America and have always had reasonably competitive showings, having won there before,” commented Bobby Rahal, Team Principal. “The track, with its long, fast corners, is definitely more in our wheelhouse than ones with tight corners. The layout of the track suits the BMW M8 well. We’ve got our fingers crossed and will do everything we can as a team and I know BMW will as well, to have a great race.”

In the GTD class, Bill Auberlen and Robby Foley will team up in the No. 96 Turner Motorsport BMW M6 GT3. The duo scored their best finish of the season – third – in the most recent Round Three race at Sebring International Raceway two weeks ago.

The two-hour-and-forty-minute race at Road America will take the green flag at 11:05 p.m. CT on Sunday, Aug. 2 and be broadcast live on NBC beginning at 12:00 p.m. ET. Follow us on Twitter @BMWUSARacing for news from the pit box and get live scoring and in-car camera views at IMSA.com.

Connor De Phillippi, driver No. 25 BMW M8 GTE: “Road America is a great track to show the strengths of our BMW M8 GTE. While it will be a new track for Bruno (Spengler), I have full confidence that he will be up to speed despite the limited practice time.”

Bruno Spengler, driver No. 25 BMW M8 GTE: “I am really looking forward to my first time at Road America. I have driven the track on iRacing and liked it. Free practice is extremely limited with our new schedule, so my first focus is to get up to speed quickly.”

John Edwards, Driver No. 24 BMW M8 GTE: “Road America is one of my favorite events of the year. The track is a classic and features the fastest corner we see all year, the famous kink. With the long straights and hard brake zones, there is always a chance to pass which makes for a tough battle in GTLM! I’m looking forward to it.”

Jesse Krohn, driver No. 24 BMW M8 GTE: “Clearly the last two races have not shown our potential. We have made some improvements and, hopefully, the Road America podium will be our first step back towards the championship.”

BMW Group In America
BMW of North America, LLC has been present in the United States since 1975.  Rolls-Royce Motor Cars NA, LLC began distributing vehicles in 2003.  The BMW Group in the United States has grown to include marketing, sales, and financial service organizations for the BMW brand of motor vehicles, including motorcycles, the MINI brand, and Rolls-Royce Motor Cars; Designworks, a strategic design consultancy based in California; technology offices in Silicon Valley and Chicago, and various other operations throughout the country.  BMW Manufacturing Co., LLC in South Carolina is the BMW Group global center of competence for BMW X models and manufactures the X3, X4, X5, X6 and X7 Sports Activity Vehicles. The BMW Group sales organization is represented in the U.S. through networks of 348 BMW passenger car and BMW Sports Activity Vehicle centers, 144 BMW motorcycle retailers, 118 MINI passenger car dealers, and 38 Rolls-Royce Motor Car dealers.  BMW (US) Holding Corp., the BMW Group’s sales headquarters for North America, is located in Woodcliff Lake, New Jersey.

Rahal Letterman Lanigan Racing
BMW’s partner, Rahal Letterman Lanigan Racing, based in Hilliard, Ohio and co-owned by three-time IndyCar Champion and 1986 Indianapolis 500 winner Bobby Rahal, former CBS Late Show host David Letterman and Mi-Jack co-owner Mike Lanigan, has been competing for almost three decades. Prior to the start of their 29th season of competition in 2020, the team had compiled 51 victories, 62 poles, 189 podium finishes, three series championships (1992, 2010, 2011) and claimed an Indianapolis 500 victory (Buddy Rice in 2004). In 2009 the team joined BMW of North America to campaign the new BMW M3 in the American Le Mans Series. The following year the team won both the Manufacturer and Team Championships in the GT category and swept all three GT titles – Manufacturer, Team and Driver – in 2011. In 2012, the team finished second in the Team Championship and third in the Manufacturer Championship and in 2013, the team finished second in the Driver, Team and Manufacturer Championship. Since 2014, BMW Team RLL has competed in the GTLM class of the IMSA WeatherTech SportsCar Championship with a two-car program and has brought their total to 21 wins – including the 2019 and 2020 Rolex 24 At Daytona endurance races, 28 poles and 79 podium finishes as well as a second place finish in the Manufacturer, Team and Driver