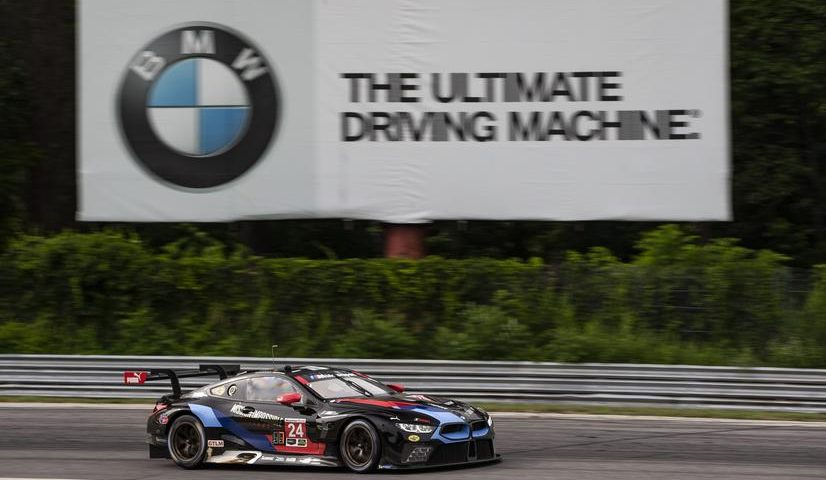 Woodcliff Lake, N.J. – July 17, 2018… The July 21st Northeast Grand Prix, at Lime Rock Park, marks the beginning of the second half of the 2018 IMSA WeatherTech SportsCar Championship and BMW Team RLL is looking to the next five races to prove the merit of the all-new BMW M8 GTE.

With two pole positions and two second place finishes at Sebring and Mid-Ohio, the M8 GTE has led the GTLM field at times, but the four other races in the first half of the season have seen both cars register disappointing finishes. The high speed centrifuge that is Lime Rock Park should be the catalyst required to begin the season’s turnaround.

Beginning with the two-hour-and-forty-minute Northeast Grand Prix, the team will debut a Mission: Impossible – Fallout livery in support of the latest chapter of the successful movie series. The “Mission: Impossible” partnership between BMW and Paramount Pictures, which dates from 2011, has already provided movie fans with several classic moments of cinematic history. The BMW brand has been meaningfully integrated into the stories of each film, showcasing forward thinking technologies and concepts that have helped the IMF agents successfully complete their missions.

“It’s always a challenge to have a problem-free or contact-free race at Lime Rock Park, but we have been successful there in the past,” said Bobby Rahal, Team Principal. “Pit strategy plays a big part at Lime Rock due to the shortness of the circuit. You go a lap down, or very close to it, when you pit but if we can call a good strategy I’m confident that the cars will be competitive. Hopefully, Lime Rock will be to the M8 GTE’s liking and if so I think we can do well. And, of course, we want to do well there because its BMW’s home track. A win there is good for the team but it’s even better for BMW.”

Connor De Phillippi, driver No. 25 BMW M8 GTE: “I believe the progress we have been making with the BMW M8 GTE should put us in a better qualifying position at Lime Rock and, with some luck, aiming towards a podium finish.”

Alexander Sims, driver No. 25 BMW M8 GTE: “I am looking forward to returning to Lime Rock. While a very short track, it has some very interesting corners. I think the characteristics of the M8 versus the M6 should put us in a more favorable position to challenge.”

John Edwards, driver No. 24 BMW M8 GTE: “I had my first win with BMW at Lime Rock (2013) and Martin Tomczyk and I finished third there last year in the M6 after a great battle with one of the Corvettes so the track holds some good memories for me. Many folks come up from BMW of North America headquarters so we always can count on a lot of support.”

Jesse Krohn, driver No. 24 BMW M8 GTE: “I like the racing at Lime Rock. The gaps between cars are very short and a pass must be earned. A good qualifying position is usually the first step to a good finish.”