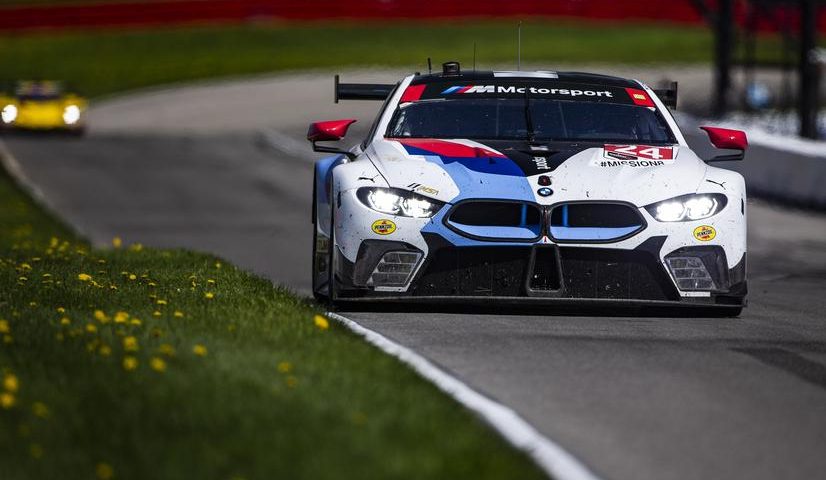 Woodcliff Lake, N.J. – June 26, 2019…The 2019 IMSA WeatherTech SportsCar Championship season resumes following the traditional Le Mans break with BMW Team RLL ready to compete in this weekend’s Sahlen’s Six Hours Of The Glen, at Watkins Glen International. The 2019 Rolex 24 At Daytona winners have been unable to reach the GTLM class podium in subsequent rounds at Sebring, Long Beach and Mid-Ohio, but feel confident of a stronger performance at The Glen following a Balance of Performance change that will see a nominal power increase for the BMW M8 GTE.

Tom Blomqvist and Connor De Phillippi will drive the No. 25 BMW M8 GTE and John Edwards and Jesse Krohn will pilot the No. 24 BMW M8 GTE at Watkins Glen. Only last weekend all four competed in the Nurburgring 24 race for ROWE Racing in the team’s BMW M6 GT3 machines. Jesse Krohn also raced a BMW Motorsport BMW M8 GTE at Le Mans the weekend before. In addition, BMW Team RLL completed three days of testing – two days at Watkins Glen and one day at Road America – in recent weeks.

The team’s most recent win at The Glen was in 2017 with Bill Auberlen and Alexander Sims driving the BMW M6 GTLM to the Six Hour win. Auberlen also co-drove to two additional podium finishes with BMW Team RLL at The Glen; third in 2015 and 2016 with Dirk Werner. This weekend the veteran will co-drive the Turner Motorsport BMW M6 GT3 at Watkins Glen with Robby Foley and Dillon Machavern. Last season, Turner Motorsport won the GT Daytona class at the Six Hour.

“I have always loved going to Watkins Glen,” said Bobby Rahal, Team Principal.
“I think it’s truly one of the great circuits in North America. It really is a fast track and demands commitment which really means it separates the men from the boys and the women from the girls. We have had reasonably good qualifying performance over the years and of course we won in 2017. Last year we struggled a little with the new M8 and the results certainly showed that but this year we have been a little more competitive than last. We just had a very good test that gave us some good direction as to the setup so hopefully all of that is going to ensure that we are in it with a chance to win.”

The green flag for the Sahlen’s Six Hours Of The Glen falls at 9:45 a.m. ET on Sunday, June 30th. A three-hour review broadcast of the race will air on NBCSN beginning at 7:00 p.m. ET. Follow us on Twitter @BMWUSARacing for news from the pit box and get live scoring and in-car camera views at IMSA.com.

Tom Blomqvist, driver No. 25 BMW M8 GTE: “Of the tracks we face this season, Watkins Glen is the only track I’ve had previous experience at after racing there last year. It’s one of the coolest ones as well! Obviously, I’m excited to get back. We’ve worked hard over the break and the whole team is as motivated as ever to get a result. We’ll be gunning for the win!

Connor De Phillippi, driver No. 25 BMW M8 GTE: “Watkins Glen is one of my top three favorite tracks on the calendar. We come into this weekend well prepared and it’s a high-speed circuit which falls right in the characteristic strengths of our BMW M8 GTE. We’ll be aiming to get this second half of the season kicked off with another win!

John Edwards, driver No. 24 BMW M8 GTE: “It’s been a long break from IMSA racing for us but we’re now headed to my favorite track in North America! The fast, flowing corners and elevation change at Watkins Glen make it a really unique track and I love coming back every year. We had a successful test during the gap between races so I’m optimistic we can fight for this win.”

Jesse Krohn, driver No. 24 BMW M8 GTE: “I’m looking forward to Watkins Glen. I think we are in a lot better position than last year based on the positive test. With all that we have now we should really be able to get a good result this weekend.”

Rahal Letterman Lanigan Racing
BMW’s partner, Rahal Letterman Lanigan Racing, based in Hilliard, Ohio and co-owned by three-time IndyCar Champion and 1986 Indianapolis 500 winner Bobby Rahal, former CBS Late Show host David Letterman and Mi-Jack co-owner Mike Lanigan, has
been competing for almost three decades. Prior to the start of their 27th season of competition in 2018, the team had compiled 42 victories, 53 poles, 162 podium finishes, three series championships (1992, 2010, 2011) and claimed an Indianapolis 500 victory (Buddy Rice in 2004). In 2009 the team joined BMW of North America to campaign the new BMW M3 in the American Le Mans Series. The following year the team won both the Manufacturer and Team Championships in the GT category and swept all three GT titles – Manufacturer, Team and Driver – in 2011. In 2012, the team finished second in the Team Championship and third in the Manufacturer Championship and in 2013, the team finished second in the Driver, Team and Manufacturer Championship. Since 2014, BMW Team RLL has competed in the GTLM class of the IMSA WeatherTech SportsCar Championship with a two car program and has brought their total to 17 wins, 23 poles and 68 podium finishes as well as a second place finish in the Manufacturer, Team and Driver championships in 2015 and 2017.