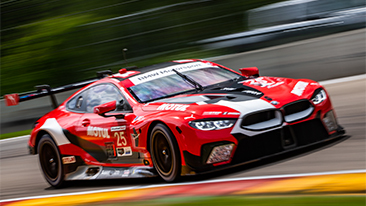 Woodcliff Lake, N.J. – Sept. 2, 2020 . . . With consecutive podium finishes (P3 – Road America and P2 – VIR) in the last two 2020 IMSA WeatherTech SportsCar Championship races BMW Team RLL has now amassed a total of 80 podium finishes since beginning its BMW racing program in 2009.The team is hoping to add a second season’s win at the six-hour Tirerack.com Grand Prix at Michelin Raceway Road Atlanta, in Braselton Ga. On Sept. 5th. BMW Team RLL triumphed at this year’s Rolex 24 At Daytona in January, the only event of 2020 not affected by the Covid-19 pandemic. The six-hour race at Road Atlanta replaces the six-hour race at Watkins Glen International.

“Endurance races have changed quite a bit in recent years,” said Bobby Rahal, Team Principal. “There was a time when the cars were not robust enough and the drivers would effectively cruise around until the final hours. Today, every race is segmented into short, flat out sprint stints so the key is staying out of trouble and not making mistakes.”

At VIR, Bill Auberlen and Robby Foley drove the No. 96 Turner Motorsport BMW M6 GT3 to the GTD class victory, giving Auberlen the lead in all-time IMSA victories with 61. The duo now stands fifth in GTD class driver points and will be looking for a second consecutive win at Road Atlanta where Turner Motorsport won the 2019 edition of the Petit Le Mans.

John Edwards, Driver No. 24 BMW M8 GTE: “Road Atlanta is a track that requires big commitment to go fast. Our M8 is always good there and we have a lot of podiums there as a team. After some issues in the last race at VIR, it’s time for Jesse and me to win some races and get ourselves back in the championship fight.”

Jesse Krohn, driver No. 24 BMW M8 GTE: “By the time I got in the car at VIR it had broken and been repaired so we were eliminated from a competitive result. However, the M8 felt extremely good so I am expecting a good race at Road Atlanta.”

Connor De Phillippi, driver No. 25 BMW M8 GTE: “We are going into the Road Atlanta race weekend with podium momentum and it is typically a good track for our M8 GTLM car. The conditions will be hotter than they typically are in comparison to Petit Le Mans in October, so this will make it interesting to see how this will impact the pace of the race. Our focus will continue to be getting Bruno laps early in the weekend, so he feels ready for six hours of battle.”

Bruno Spengler, driver No. 25 BMW M8 GTE: “Road Atlanta is another new track for me so another weekend of discovery. I am looking forward to it as well as driving a longer distance. Connor and I will be looking for another good result.”

BMW Group In America
BMW of North America, LLC has been present in the United States since 1975.  Rolls-Royce Motor Cars NA, LLC began distributing vehicles in 2003.  The BMW Group in the United States has grown to include marketing, sales, and financial service organizations for the BMW brand of motor vehicles, including motorcycles, the MINI brand, and Rolls-Royce Motor Cars; Designworks, a strategic design consultancy based in California; technology offices in Silicon Valley and Chicago, and various other operations throughout the country.  BMW Manufacturing Co., LLC in South Carolina is the BMW Group global center of competence for BMW X models and manufactures the X3, X4, X5, X6 and X7 Sports Activity Vehicles. The BMW Group sales organization is represented in the U.S. through networks of 349 BMW passenger car and BMW Sports Activity Vehicle centers, 144 BMW motorcycle retailers, 117 MINI passenger car dealers, and 38 Rolls-Royce Motor Car dealers.  BMW (US) Holding Corp., the BMW Group’s sales headquarters for North America, is located in Woodcliff Lake, New Jersey.

Team RLL has competed in the GTLM class of the IMSA WeatherTech SportsCar Championship with a two-car program and has brought their total to 21 wins – including the 2019 and 2020 Rolex 24 At Daytona endurance races, 28 poles and 79 podium finishes as well as a second place finish in the Manufacturer, Team and Driver championships in 2015 and 2017.