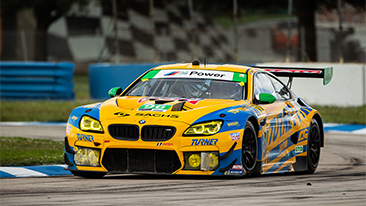 Woodcliff Lake, N.J. – March 16, 2021. . .The Sebring International Raceway has been a successful venue for BMW Team RLL. From 2010 through the 2020 season the team has totaled two victories, four second and three third place finishes at the IMSA WeatherTech SportsCar Championship 12 Hours of Sebring. Last year, with the race’s traditional March date delayed until November because of the Covid-19 pandemic, BMW Team RLL came within minutes of adding a third GTLM class victory before being punted out of the lead by an over-anxious GTD class competitor running into the rear of the No. 25 BMW M8 GTE with some 10 minutes remaining in the race. Only four months later, BMW Team RLL is ready for redemption.

“It’s hard to believe it’s our 12th year racing at Sebring with BMW Team RLL,” stated Bobby Rahal, Team Principal. “Sebring holds a special place for me personally having gone there with my father for many years and then, of course, I started racing there in 1976, culminating with a win in 1987. Sebring has always been very important to me personally and professionally. With BMW Team RLL, we have had pretty decent performances over the years with two wins in a row back in 2011-2012. We’ve qualified well and were second in 2018, third and fourth last year. We’ve always been pretty strong in Sebring and so I expect that to be the case again this year. Like any endurance race, staying out of trouble is key. Last year we were hit by a GTD car when we were leading close to the finish so that was extremely disappointing because I think we had the race in the bag. I look forward to a good race and hopefully Sebring will be the scene of another victory for BMW Team RLL.”

The 2021 IMSA WeatherTech SportsCar Championship season will be the fourth for the BMW M8 GTE, with the 2020 season having been the most successful to-date. This season, BMW Team RLL is focusing exclusively on the four races that compose the Michelin Endurance Cup and began the season with a third-place finish at the Rolex 24 At Daytona.

The driver lineup for the 69th edition of the 12-hour race will be anchored by the four 2020 full-season drivers; Connor De Philippi and Bruno Spengler in the No. 25 MOTUL BMW M8 GTE, and John Edwards and Jesse Krohn in the No. 24 MOTUL BMW M8 GTE. Rolex 24 co-drivers Philipp Eng and Augusto Farfus will rejoin the team in the No. 25 and No. 24 M8 GTE cars, respectively.

The 69th Annual Mobil 1 Twelve Hours of Sebring presented by Advance Auto Parts will take the green flag at 10:10 a.m. on Saturday, March 20th. Live race coverage begins at 10 a.m. on NBCSN, moves to the NBC Sports App at noon, before returning to NBCSN at 7 p.m. for the concluding hours. The entire telecast also streams on TrackPass on NBC Sports Gold. Follow us on Twitter @BMWUSARacing for news from the pit box and get live scoring and in-car camera views at IMSA.com.

John Edwards, driver No. 24 BMW M8 GTE: “Sebring is a very intense race, especially with the nighttime finish. Tensions are always high, and it seems that more risky moves get made towards the end of this race than any other. We had a reasonable start to the 2021 season with a podium at Daytona, but at Sebring our eyes are absolutely on a victory. As a team we looked to be set up for a 1-2 finish last year before some late race issues took both cars out of contention, so we all have our eyes on redemption!”

Jesse Krohn, driver No. 24 BMW M8 GTE: “We had a very strong race at Sebring last year. The No. 24 M8 finished on the podium and our sister car was fighting for the victory. I don’t see any reason why we should not be equally strong this year.”

Augusto Farfus, driver No. 24 BMW M8 GTE: “I believe we’ll have a competitive return to Sebring this year. John, Jesse and I finished third there in November and, with Marco Wittmann, we were third again at Daytona to begin this season.”

Connor De Phillippi, driver No. 25 BMW M8 GTE: “We’re back at Sebring for some redemption. This event is one of my favorite events in the world and I’m looking forward to building on our momentum from the last time we were on track here. I believe we have a very strong lineup to battle for a win.”

Bruno Spengler, driver No. 25 BMW M8 GTE: “I am really looking to our return to Sebring. In November, we had a very good BMW, but quite bad luck with only minutes remaining. We certainly have good data as the last 12 Hour was only four months ago, so I expect we’ll be able to have a fast start to the weekend.”

Philipp Eng, driver No. 25 BMW M8 GTE: “I really hope we are luckier and can use the full potential of our package at the Sebring12h. I really enjoyed driving the M8 GTE at Daytona and working with BMW Team RLL is just great. The No. 25 car was in very good shape last year at the 12h and I hope we can be as competitive this year and finish the job with a bit more luck!”

BMW Group in America
BMW of North America, LLC has been present in the United States since 1975.  Rolls-Royce Motor Cars NA, LLC began distributing vehicles in 2003.  The BMW Group in the United States has grown to include marketing, sales, and financial service organizations for the BMW brand of motor vehicles, including motorcycles, the MINI brand, and Rolls-Royce Motor Cars; Designworks, a strategic design consultancy based in California; technology offices in Silicon Valley and Chicago, and various other operations throughout the country.  BMW Manufacturing Co., LLC in South Carolina is the BMW Group global center of competence for BMW X models and manufactures the X3, X4, X5, X6 and X7 Sports Activity Vehicles. The BMW Group sales organization is represented in the U.S. through networks of 349 BMW passenger car and BMW Sports Activity Vehicle centers, 143 BMW motorcycle retailers, 116 MINI passenger car dealers, and 38 Rolls-Royce Motor Car dealers.  BMW (US) Holding Corp., the BMW Group’s sales headquarters for North America, is located in Woodcliff Lake, New Jersey.

Rahal Letterman Lanigan Racing
BMW’s partner, Rahal Letterman Lanigan Racing, based in Hilliard, Ohio and co-owned by three-time IndyCar Champion and 1986 Indianapolis 500 winner Bobby Rahal, former CBS Late Show host David Letterman and Mi-Jack co-owner Mike Lanigan, has been competing for three decades. Prior to the start of their 30th season of competition in 2021, the team had compiled 54 victories,  64 poles, 205 podium finishes, three series championships (1992, 2010, 2011), claimed two Indianapolis 500 victories (Buddy Rice in 2004 and Takuma Sato in 2020) and two Rolex 24 at Daytona victories. In 2009 the team joined BMW of North America to campaign the new BMW M3 in the American Le Mans Series. The following year the team won both the Manufacturer and Team Championships in the GT category and swept all three GT titles – Manufacturer, Team and Driver – in 2011. In 2012, the team finished second in the Team Championship and third in the Manufacturer Championship and in 2013, the team finished second in the Driver, Team and Manufacturer Championship. Since 2014, BMW Team RLL has competed in the GTLM class of the IMSA WeatherTech SportsCar Championship with a two-car program and has brought their total to 22 wins – including the 2019 and 2020 Rolex 24 At Daytona endurance races, 28 poles and 87 podium finishes prior to the start of the 2021 season.  The team earned second-place finishes in the Manufacturer, Team and Driver championships in 2015 and 2017 and was the 2020 Michelin Endurance Cup Champions.