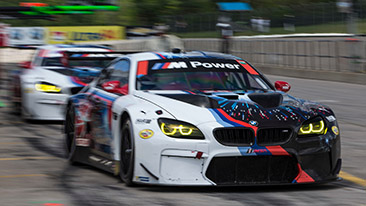 Woodcliff Lake, N.J. – July 18, 2017… Lime Rock Park, in Lakeville, Conn., has long been considered BMW of North America’s home track. Only ninety miles from the Woodcliff Lake, NJ headquarters, the short, fast circuit has been the site of numerous BMW victories since 1975 and possibly a third consecutive IMSA WeatherTech SportsCar Championship win this weekend at the Northeast Grand Prix.

BMW Team RLL has amassed five podium finishes with the BMW M6 GTLM, including two wins by Bill Auberlen and Alexander Sims, in the last three races moving BMW to third in GTLM class manufacturer points standings, Auberlen and Sims and the No. 25 BMW M6 GTLM to second in driver and team points respectively. Teammates John Edwards and Martin Tomczyk have moved up to seventh in driver points after two podium finishes in the last three races in the No. 24 M6 GTLM.

The Northeast Grand Prix will see a confident BMW Team RLL arrive with a reduction in turbocharger boost among other fueling adjustments as mandated by the series Balance of Performance rules. IMSA continues to strive for parity in the GTLM class and while these BoP adjustments are negative, BMW Team RLL has made significant progress in the handling performance of the M6 in recent tests, which have contributed greatly to the results of the past few race weekends. The team expects to continue to compete on the strengths of the BMW M6, pushing for every spot, podium position, and ultimately the race win.

“Obviously we are pleased with the level of success that we have had so far this year,” said Bobby Rahal, Team Principal. “The cars are now competitive compared to where we were last year and the early part of this year. The BoP update has certainly narrowed the gap between us and others and therefore we can put forth a competitive effort. I’m really pleased and very appreciative of all the work that BMW Motorsport and our team has done in improving the handling of the car. We have found some real gains recently that have really made the car quite good in these long, fast corners. Lime Rock is not Watkins Glen or Mosport in terms of length and overall speed perhaps but it does have a fair number of reasonably quick corners and, once again, that tends to play to our strength. BMW has had a long relationship with Lime Rock and it’s our home track so, needless to say, doing well there is very important to us and would be a great place to continue our success. Our drivers are doing a really good job in terms of getting the most out of the car and our pit stops have been good. With all of that in mind, you have to go into the race weekend feeling optimistic.”

Alexander Sims, driver No. 25 BMW M6 GTLM: “I am looking forward to getting to another new track and learning all I can before the race. Mosport went well under similar conditions so I can only hope we can recreate that sort of pace and fight for the podium positions again.”

John Edwards, driver No. 24 BMW M6 GTLM: “It’s been a great few races for us and I’m excited to carry the momentum into Lime Rock. This is the track where I had my first win as a BMW driver back in 2013 so I have some great memories here. The race is as close as we’ll get to a home race for BMW so it would be special to win here again. Although we don’t have the prototypes with us this race, Lime Rock is still one of the most challenging tracks to get through traffic so it is definitely going to be a frantic race!”

Martin Tomczyk, driver No. 24 BMW M6 GTLM: “It will be a great feeling coming to Lime Rock after the 1-2 at Mosport. The team is highly motivated and we will try to use this momentum for Lime Rock. For me the track is again a new one. So far it has never been a problem to adapt quickly to any new tracks in the US.”

BMW Group in America
BMW of North America, LLC has been present in the United States since 1975. Rolls-Royce Motor Cars NA, LLC began distributing vehicles in 2003. The BMW Group in the United States has grown to include marketing, sales, and financial service organizations for the BMW brand of motor vehicles, including motorcycles, the MINI brand, and the Rolls-Royce brand of Motor Cars; Designworks, a strategic design consultancy based in California; a technology office in Silicon Valley and various other operations throughout the country. BMW Manufacturing Co., LLC in South Carolina is part of BMW Group’s global manufacturing network and is the exclusive manufacturing plant for all X5 and X3 Sports Activity Vehicles and X6 and X4 Sports Activity Coupes. The BMW Group sales organization is represented in the U.S. through networks of 343 BMW passenger car and BMW Sports Activity Vehicle centers, 153 BMW motorcycle retailers, 127 MINI passenger car dealers, and 36 Rolls-Royce Motor Car dealers. BMW (US) Holding Corp., the BMW Group’s sales headquarters for North America, is located in Woodcliff Lake, New Jersey.