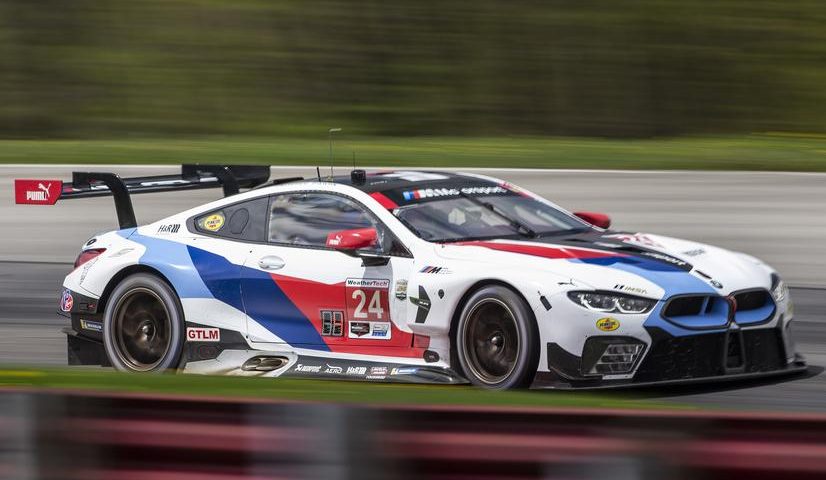 With a 1:19.623 minute lap around the 2.4-mile, 15-turn natural terrain circuit, Jesse Krohn qualified the No. 24 BMW M8 GTE in third, only .499 second from the pole sitting No. 66 Ford GT. He will co-drive tomorrow with John Edwards, the duo sharing their second season together. Connor DePhillippi will start the No. 25 BMW M8 GTE from the sixth position after posting a 1:19.893 minute lap. He will co-drive with Tom Blomqvist tomorrow. The entire GTLM field qualified within .902 seconds ensuring a very competitive contest.

The 20-minute session was declared “flexible” by the race stewards because of the changeable weather conditions meaning teams could choose from the complete selection of wet or dry Michelin tires available.

“Since the track was still drying, you could pick wet or dry tries and everyone ran dry tires.” said Brandon Fry, “The track just kept getting better throughout the session and we thought that would be the case. It’s was about who would be out at the end of the session with the driest track and the best opportunity. The No. 25 car was pretty close and it gives us a good starting spot for tomorrow and we are looking forward to a good race.”

In today’s prior session, Rob Foley qualified the No. 96 Turner Motorsport BMW M6 GT3 in the sixth GTD class starting position with a 1:27.152 minute lap. He will co-drive tomorrow with Bill Auberlen who will be making his 416th start in a BMW – the most of any driver in the world.

Jesse Krohn, driver No. 24 BMW M8 GTE (P3): “A solid qualifying. We were just lacking a little bit at the end. It seemed that whoever was going to be last over the line would get it. We got the most out of our tires today and solid job by the team. It’s going to be a long race tomorrow and from P3, anything is possible.”

Connor DePhillippi, driver No. 25 BMW M8 GTE (P6): “It was tricky conditions in qualifying and obviously not ideal to start in P6 but I did the best I could with our set up today. I think we will be in a better position tomorrow as overall, the car is good. I will try to get a clean start and hopefully, with a bit of luck and the right strategy we can work our way to the front.”

BMW Group In America
BMW of North America, LLC has been present in the United States since 1975. Rolls-Royce Motor Cars NA, LLC began distributing vehicles in 2003. The BMW Group in the United States has grown to include marketing, sales, and financial service organizations for the BMW brand of motor vehicles, including motorcycles, the MINI brand, and Rolls-Royce Motor Cars; Designworks, a strategic design consultancy based in California; technology offices in Silicon Valley and Chicago, and various other operations throughout the country. BMW Manufacturing Co., LLC in South Carolina is the BMW Group global center of competence for BMW X models and manufactures the X3, X4, X5, X6 and X7 Sports Activity Vehicles. The BMW Group sales organization is represented in the U.S. through networks of 346 BMW passenger car and BMW Sports Activity Vehicle centers, 148 BMW motorcycle retailers, 123 MINI passenger car dealers, and 37 Rolls-Royce Motor Car dealers. BMW (US) Holding Corp., the BMW Group’s sales headquarters for North America, is located in Woodcliff Lake, New Jersey.

Rahal Letterman Lanigan Racing
BMW’s partner, Rahal Letterman Lanigan Racing, based in Hilliard, Ohio and co-owned by three-time IndyCar Champion and 1986 Indianapolis 500 winner Bobby Rahal, former CBS Late Show host David Letterman and Mi-Jack co-owner Mike Lanigan, has been competing for almost three decades. Prior to the start of their 27th season of competition in 2018, the team had compiled 42 victories, 53 poles, 162 podium finishes, three series championships (1992, 2010, 2011) and claimed an Indianapolis 500 victory (Buddy Rice in 2004). In 2009 the team joined BMW of North America to campaign the new BMW M3 in the American Le
Mans Series. The following year the team won both the Manufacturer and Team Championships in the GT category and swept all three GT titles – Manufacturer, Team and Driver – in 2011. In 2012, the team finished second in the Team Championship and third in the Manufacturer Championship and in 2013, the team finished second in the Driver, Team and Manufacturer Championship. Since 2014, BMW Team RLL has competed in the GTLM class of the IMSA WeatherTech SportsCar Championship with a two car program and has brought their total to 17 wins, 23 poles and 68 podium finishes as well as a second place finish in the Manufacturer, Team and Driver championships in 2015 and 2017.