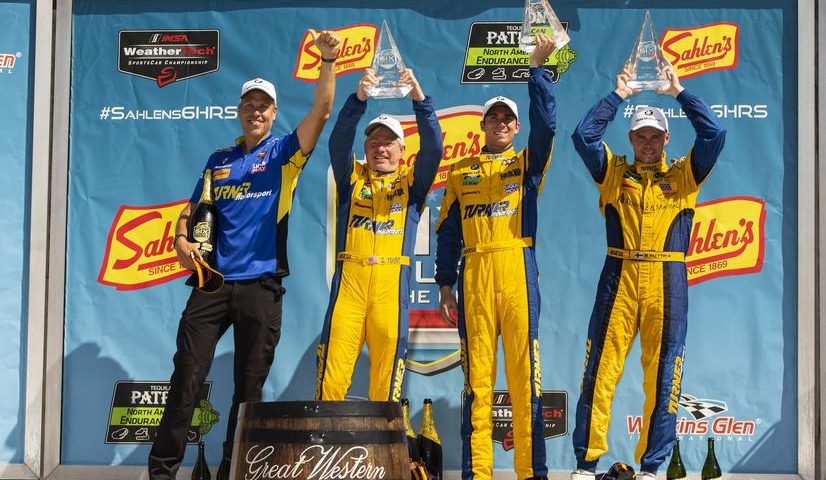 Woodcliff Lake, N.J. – June 30, 2018… BMW Team RLL will start the Sahlen’s Six Hours of The Glen from the seventh and eighth positions following today’s 15-minute GTLM class qualifying session. The green flag waved this afternoon at a very hot high noon and conditions are expected to be even warmer tomorrow.

In his first race weekend with BMW Team RLL, Tom Blomqvist qualified the No. 24 BMW M8 GTE seventh with a time of 1:43.227 minutes on his seventh lap of the classic Watkins Glen International circuit. Connor De Phillippi qualified the No. 25 BMW M8 GTE eighth with a 1:43.539 minute lap. The pole position was won by the No. 67 Ford GT. Blomqvist will share the No. 24 M8 with John Edwards and Jesse Krohn tomorrow and De Phillippi will co-drive the No. 25 M8 with Bill Auberlen and Alexander Sims. Auberlen and Sims won the six-hour contest last year in the No. 25 BMW M6 GLTM.

“We knew coming in that it was going to be a challenge in terms of performance for us.” said Brandon Fry, BMW Team RLL Technical and Racing Operations Director. “We continue making performance improvements to both BMW M8 GTE’s and will keep looking at things tonight, looking forward to tomorrow. It’s going to be hot and that is going to make things difficult for everyone, but having three drivers, will be an advantage we feel. Tomorrow is a long race, which is something we like so we will be looking for opportunities and we are going to give it our best”

Tom Blomqvist, driver No. 24 BMW M8 GTE (P7):
“The car, in general is good. Our qualifying performance wasn’t up to par today but we are banking on having a consistent car tomorrow. Tire wear can be an issue for some teams, and we have focused on our durability and will try to play that durability card tomorrow in the race. We have extracted the most out of the chassis but there are a lot of straightaways and we can only do so much with the power we have. We can only hope to improve here and there, use BMW M8 GTE’s very good drivability and focus on out-thinking the competition.”

Connor De Phillippi, driver No. 25 BMW M8 GTE (P8):
“Qualifying was fine in regards to the heat because we aren’t doing many laps so you don’t have time to really feel the heat. Last time I drove the BMW M8 GTE was at Spa in the rain where the heat wasn’t as bad as it is here this weekend. It is going to be an interesting race to deal with due to the heat but at the end of the day it’s the same for everyone, so it shouldn’t really be a problem for us. We’re supposed to be young, fit and able to deal with that stuff. We were lacking a bit of speed in qualifying so there wasn’t really much more we could do in that respect. Looking forward to the race, we just need to see how things will develop. We’re not hoping for miracles but if we can stay out of trouble and avoid mistakes, we’ll see where we end up.”

The Sahlen’s Six Hours of The Glen will drop the green flag at 9:45 a.m. ET Sunday, July 1 and be broadcast live on FOX Sports 1 beginning at 9:30 a.m. ET. Follow BMW Team RLL on Twitter at @BMWUSARacing for “from-the-pit-box” updates all weekend.