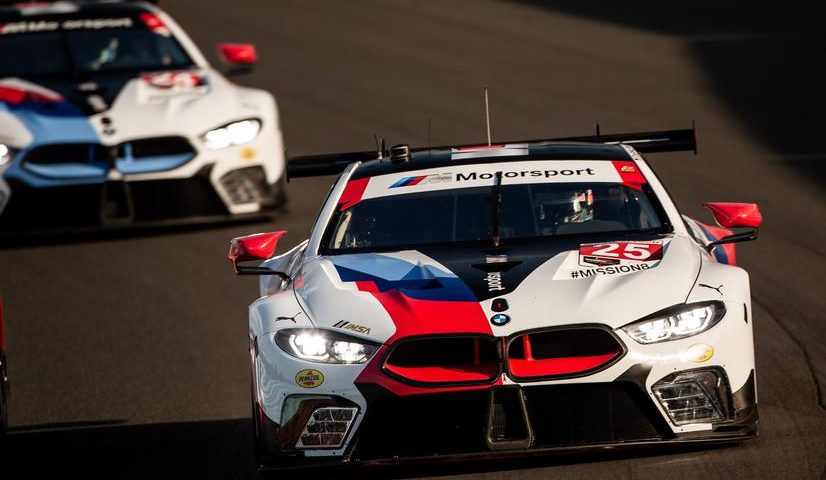 Woodcliff Lake, N.J. – June 29, 2019…BMW Team RLL will start tomorrow’s Sahlen’s Six Hours of The Glen from the fourth and sixth GTLM class qualifying positions. John Edwards qualified the No. 24 BMW M8 GTE fourth with a 1:41.301 minute lap around the venerable Watkins Glen International circuit, only .502 seconds from the pole sitting No. 3 Corvette C7.R. He will co-drive tomorrow with Jesse Krohn. Connor DePhillippi will start the No. 25 BMW M8 GTE from the sixth position after posting a 1:41.414 minute lap. He will co-drive with Tom Blomqvist tomorrow.

“Qualifying was a little bit of an unknown for us today.” said Brandon Fry, BMW Team RLL Technical Director. “With the high temps yesterday and the rain this morning we didn’t have a lot of data to go off of. We tested here with cooler temperatures earlier in the year and we feel comfortable running in the cooler temperatures which looks like will be the case tomorrow. Nonetheless, a solid job all around and it doesn’t really matter where you start, I think the cars are a little better then yesterday, so we’re looking forward to the race tomorrow which should be good to us.”

In today’s earlier session, Dillon Machavern qualified the No. 96 Turner Motorsport BMW M6 GT3 in the third GTD class starting position with a 1:45.506 minute lap. He will co-drive tomorrow with Bill Auberlen and Robby Foley. Last season, Machavern was part of the winning Turner Motorsport trio in this race along with Markus Palttala and Don Yount.

The green flag for the Sahlen’s Six Hours Of The Glen falls at 9:45 a.m. ET tomorrow. A three-hour review broadcast of the race will air on NBCSN beginning at 7:00 p.m. ET. Follow us on Twitter @BMWUSARacing for news from the pit box and get live scoring and in-car camera views at IMSA.com.

John Edwards, driver No. 24 BMW M8 GTE (P4):
“I had a good lap but did not feel that it was possible to do a 1:40.7 so I do not think pole was within reach but we were close to P3 or P2. Ultimately, it is a six hour race and we are in the pack so we’ll see what we’ve got tomorrow. I had a bit of a peak in lap time early on in qualifying and will go back and try to ensure that we can maintain our pace for the full stint.”

Connor DePhillippi, driver No. 25 BMW M8 GTE (P6):
“I think compared to yesterday, we made some steps forward in terms of overall car balance and we need to go more in this direction but it’s definitely a good step forward. We were in the pack during qualifying but we’ll have to see how we do in the long stints tomorrow. The cooler temperatures definitely play to our car and engine strengths, so I think we should find a smaller difference between the teams tomorrow. With some changes to the car I think we will be in the mix for a podium if not the win.”

Dillon Machavern, driver No. 96 BMW M6 GT3 (P3):
“The car felt really good. We didn’t get a ton of time in practice, especially myself, I missed out on this morning session. It just wasn’t worth it for me to go in the rain so we had Robby get some time. The car was great. I’m still learning some things out there but it seems like over the long run we’re going to have a really solid package. The car feels a lot better than last year and our lineup this year is really strong so I think we’re going to be moving up to the front again.”