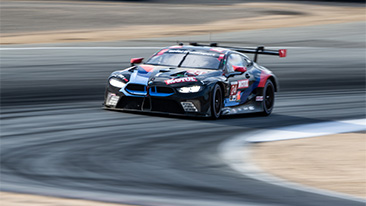 Bruno Spengler, driving the No. 25 MOTUL BMW M8 GTE, qualified in the fourth starting position with a 1:22.054-miniute lap around the classic Laguna Seca circuit. He will co-drive with Connor De Phillippi. Jesse Krohn, last year’s polesitter at this race, qualified the No. 24 MOTUL BMW M8 GTE, he will co-drive with John Edwards, in the fifth starting position with a 1:22.120-minute lap. The top-five GTLM class qualifiers were all within .637 seconds of the polesitting Corvette C8.R.

Historically, Laguna Seca has been a strong circuit for BMW, from its very first season of IMSA competition in 1975 with a victory by Hans Stuck in a 3.0 BMW CSL to recent BMW Team RLL wins in 2015, 2017 and 2018. Last season, Edwards and Krohn shared a runner-up finish after starting from the pole position in the No. 24 BMW M8 GTE.

Robby Foley, co-driving the No. 96 Turner Motorsport BMW M6 GT3 with Bill Auberlen, will start today’s race from the outside of the 13-car GTD class front row following a qualifying lap of 1:24.140-minutes. The duo is looking for their third GTD class victory of the 2020 season. Their most recent win, at the Charlotte Motor Speedway three weeks ago, was Auberlen’s 62nd IMSA victory – the most in IMSA history.

The two-hour-and-forty-minute race is scheduled to take the green flag at 1:05 p.m. local time this afternoon. The race will be broadcast on NBCSN from 6:30 – 9:30 p.m. ET this evening. Follow us on Twitter @BMWUSARacing for news from the pit box and get live scoring and in-car camera views at IMSA.com.

Bruno Spengler, driver No. 25 BMW M8 GTE (P4): “Overall, today’s qualifying performance was not the most satisfying, but the team made some particularly good improvements for the race. Great work from them. I believe we’ll be able to fight for a podium finish this afternoon.”

Jesse Krohn, driver No. 24 BMW M8 GTE (P5): “Our competition seems to have a very good one-lap pace while we are working toward good stint pace. After scoring the pole here last year it is a bit disappointing to start two rows back, but we have a good BMW for the race.” BMW Group in America
BMW of North America, LLC has been present in the United States since 1975.  Rolls-Royce Motor Cars NA, LLC began distributing vehicles in 2003.  The BMW Group in the United States has grown to include marketing, sales, and financial service organizations for the BMW brand of motor vehicles, including motorcycles, the MINI brand, and Rolls-Royce Motor Cars; Designworks, a strategic design consultancy based in California; technology offices in Silicon Valley and Chicago, and various other operations throughout the country.  BMW Manufacturing Co., LLC in South Carolina is the BMW Group global center of competence for BMW X models and manufactures the X3, X4, X5, X6 and X7 Sports Activity Vehicles. The BMW Group sales organization is represented in the U.S. through networks of 349 BMW passenger car and BMW Sports Activity Vehicle centers, 145 BMW motorcycle retailers, 117 MINI passenger car dealers, and 38 Rolls-Royce Motor Car dealers.  BMW (US) Holding Corp., the BMW Group’s sales headquarters for North America, is located in Woodcliff Lake, New Jersey.