BMW Team RLL Back on Podium at Road America. 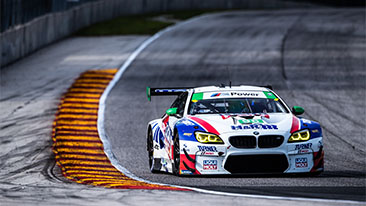 Woodcliff Lake, N.J. – Aug. 1, 2020 . . .  Following limited laps in practice due to a mechanical issue with the No. 25 MOTUL BMW M8 GTE, Bruno Spengler made the most of his very first laps of Road America in this afternoon’s qualifying session. His 2:01.155-minute lap around the classic four-mile circuit was only .565 seconds behind the class pole and scored the 2012 DTM champion the fourth starting position. Spengler will co-drive the all-red M8 GTE with Connor De Phillippi in tomorrow’s two-hour-and-forty-minute race. Jesse Krohn qualified the No. 24 MOTUL BMW M8 GTE in the fifth starting spot with a 2:01.202-minute lap – only .047 seconds from his teammate. Krohn will co-drive with John Edwards tomorrow. The duo shared this year’s Rolex 24 At Daytona victory with Augusto Farfus and Chas Mostert. The entire six-car GTLM field qualified within .715 seconds.

In the GTD class, Robby Foley qualified the No. 96 Turner Motorsport BMW M6 GT3 he co-drives with Bill Auberlen in the fourth starting position with a 2:07.361-minute lap. The Turner crew had lots of work following the second practice session this morning after brake failure caused Foley to slide off the track in turn five on his only his fifth lap bringing out a red flag. The duo scored their best finish of the season – third – in the most recent Round Three race at Sebring International Raceway two weeks ago. Bill Auberlen continues to race for his 61st victory to become the winningest driver in IMSA history.

Earlier this morning, BMW teams qualified for this afternoon’s two-hour IMSA Michelin Pilot Challenge race. Robby Foley, driving the No. 95 Turner Motorsport BMW M4 GT4, was the best of the four BMWs in the Grand Sport field and will start sixth. The second Turner Motorsport machine, the No. 96 of Vince Barletta will line up 19th. BimmerWorld Racing will start ninth (No. 82, James Clay) and 13th (No. 80, Nick Galante).

The two-hour-and-forty-minute race at Road America will take the green flag at 11:05 p.m. CT on Sunday, Aug. 2 and be broadcast live on NBC beginning at 12:00 p.m. ET. Follow us on Twitter @BMWUSARacing for news from the pit box and get live scoring and in-car camera views at IMSA.com.

Bruno Spengler, driver No. 25 BMW M8 GTE (P4): “I had only 16 laps of practice before qualifying so I was not totally comfortable with the circuit yet. I am relatively happy with my performance and now we will work on a few more improvements with the car. Road America is an amazing track and I’m really enjoying being here.”

Jesse Krohn, driver No. 24 BMW M8 GTE (P5): “Unfortunately, I had my fastest lap taken away and my second fastest lap was not quite good enough so we will start from fifth. We have made many improvements in practice and the car felt very good.”

BMW Group In America
BMW of North America, LLC has been present in the United States since 1975.  Rolls-Royce Motor Cars NA, LLC began distributing vehicles in 2003.  The BMW Group in the United States has grown to include marketing, sales, and financial service organizations for the BMW brand of motor vehicles, including motorcycles, the MINI brand, and Rolls-Royce Motor Cars; Designworks, a strategic design consultancy based in California; technology offices in Silicon Valley and Chicago, and various other operations throughout the country.  BMW Manufacturing Co., LLC in South Carolina is the BMW Group global center of competence for BMW X models and manufactures the X3, X4, X5, X6 and X7 Sports Activity Vehicles. The BMW Group sales organization is represented in the U.S. through networks of 348 BMW passenger car and BMW Sports Activity Vehicle centers, 144 BMW motorcycle retailers, 118 MINI passenger car dealers, and 38 Rolls-Royce Motor Car dealers.  BMW (US) Holding Corp., the BMW Group’s sales headquarters for North America, is located in Woodcliff Lake, New Jersey.