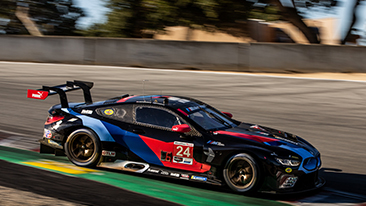 Woodcliff Lake, N.J. – Sept. 14, 2019… BMW Team RLL looks poised to continue its success at WeatherTech Raceway Laguna Seca with a strong 1-3 qualifying effort this afternoon in preparation for tomorrow’s IMSA WeatherTech SportsCar Championship race. Setting a new GTLM class qualifying record of 1:21.557 minutes around the iconic 2.238-mile, 11-turn circuit, Jesse Krohn put the all-black liveried No. 24 BMW M8 GTE on the pole position. It was the Finnish ace’s second career IMSA pole (CTMP – 2019) and the 28th for the BMW Team RLL program since its inception in 2009. Krohn shares the No. 24 machine with John Edwards. Tom Blomqvist, qualifying for his first race at Laguna Seca, drove the No. 25 BMW M8 GTE to the third starting position with a 1:21.891 minute lap, only .334 seconds in arrears of his teammate. Blomqvist co-drives with Connor De Phillippi, last year’s GTLM class winner with Alexander Sims.

With today’s result, the winners here in 2015, 2017 and 2018 made sure the rest of the GTLM class knows that tomorrow’s victory will have to first go through BMW and more than likely, just like the previous three wins, a black BMW.

Tomorrow’s two-hour-and-forty-minute IMSA WeatherTech SportsCar Championship race will start 12:05 p.m. local time and will be broadcast on NBC beginning at 3:00 p.m. ET. Follow us on Twitter @BMWUSARacing for news from the pit box and get live scoring and in-car camera views at IMSA.com.

“The pole was a pleasant surprise,” said Bobby Rahal, Team Principal. “Jesse drove one heck of a lap, but tomorrow is what counts. We have all worked extremely hard this season and I am very proud of our effort here so far.”

Jesse Krohn, driver No. 24 BMW M8 GTE (P1): “Today we had a plan and executed it – one good lap and box. We had the fuel for an extra lap if necessary, but the team had transformed the M8 GTE from the final practice session this morning so one lap was all that was needed.”

Tom Blomqvist, driver No. 25 BMW M8 GTE (P3): “Despite making two mistakes on two consecutive laps, I held on for the third spot. I think I had a car that could have shared the front row with Jesse, but I had gone past the car’s optimum performance.”

BMW Group In America
BMW of North America, LLC has been present in the United States since 1975.  Rolls-Royce Motor Cars NA, LLC began distributing vehicles in 2003.  The BMW Group in the United States has grown to include marketing, sales, and financial service organizations for the BMW brand of motor vehicles, including motorcycles, the MINI brand, and Rolls-Royce Motor Cars; Designworks, a strategic design consultancy based in California; technology offices in Silicon Valley and Chicago, and various other operations throughout the country.  BMW Manufacturing Co., LLC in South Carolina is the BMW Group global center of competence for BMW X models and manufactures the X3, X4, X5, X6 and X7 Sports Activity Vehicles. The BMW Group sales organization is represented in the U.S. through networks of 348 BMW passenger car and BMW Sports Activity Vehicle centers, 148 BMW motorcycle retailers, 123 MINI passenger car dealers, and 38 Rolls-Royce Motor Car dealers.  BMW (US) Holding Corp., the BMW Group’s sales headquarters for North America, is located in Woodcliff Lake, New Jersey.