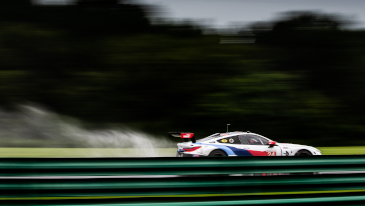 Woodcliff Lake, N.J. – Aug. 24, 2019… BMW Team RLL will start from the seventh and eighth GTLM class positions in tomorrow’s IMSA WeatherTech SportsCar Championship Michelin GT Challenge at VIR. With a lap of 1:41.703 minutes around the 3.27-mile, 17-turn Virginia International Raceway, John Edwards qualified the No. 24 BMW M8 GTE seventh – 1.073 seconds from the pole sitting No. 912 Porsche 911 RSR. Connor De Phillippi, the winner of this race last year (along with Alexander Sims), qualified the No. 25 BMW M8 GTE in the eighth spot with a 1:41.772 minute lap. Edwards will share the No. 24 machine with Jesse Krohn, the duo finishing third here in 2018. De Phillippi will co-drive with Tom Blomqvist in the No. 25 M8.

“Obviously the tricky conditions today with the weather being wet this morning and drying out leading up to the qualifying session did not result in our best qualifying results. Tomorrow is meant to be considerably different and hopefully the decisions we made today will play out in our favor during the race.” said Brandon Fry, RLL Technical Director.

The green flag for the Michelin GT Challenge at VIR falls at 1:35 p.m. ET tomorrow. The two-hour-and-forty-minute race will be broadcast on NBCSN beginning at 1:30 p.m. ET. Follow us on Twitter @BMWUSARacing for news from the pit box and get live scoring and in-car camera views at IMSA.com.

John Edwards, driver No. 24 BMW M8 GTE (P7): “I think we are faster than what we showed in qualifying today. Our car did not really suit the drying track and cooler conditions. Tomorrow, with a dry day forecasted, we will be quicker and be better prepared to come back up through the field.”

Connor DePhillippi, driver No. 25 BMW M8 GTE (P8): “Tricky qualifying with drying track conditions and slick tires. It made it very interesting to try and put a complete lap together. Overall, the one lap pace was not there but I am confident we have the right setup and combination to be very strong in the race tomorrow.”