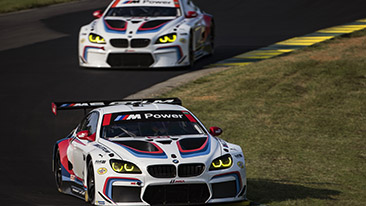 Alexander Sims qualified the No. 25 BMW M6 GTLM second with a time of 1:40.415 minutes around the 3.27-mile, 17-turn Virginia International Raceway. The Englishman was only bested at the close of the 15-minute qualifying session by the No. 66 Ford of Joey Hand. Setting the stage for an exciting race, Sims and Bill Auberlen currently stand third in GTLM driver points standings, only one point behind Hand and Dirk Müller.

John Edwards qualified the No. 24 BMW M6 GTLM in the third starting position with a lap of 1:40.441 minutes. Edwards and co-driver Martin Tomczyk stand seventh in GTLM driver points standings.

“We can be pleased with our qualifying results today,” said Neil Fife, BMW Team RLL Race Engineer. “We worked hard to improve the cars through practice and are happy to see both are closely matched in performance.”

Alexander Sims, driver No. 25 BMW M6 GTLM (P2): “We made a couple of tweaks to the M6 before qualifying and despite a tricky moment through turn three on my first two laps was able to pick up quite a bit of time over yesterday’s practice sessions with a good, clean lap. I am pleasantly surprised to start from the front row and believe we have a good race set-up.”

John Edwards, driver No. 24 BMW M6 GTLM (P3): “ VIR is a great place to qualify because the amount of runoff allows you to take some chances that you can’t at most other tracks. I certainly made the most of that and dropped tires off in both turns 10 and 17 on my quick lap. It was not enough to slow the car, but it always gets your attention. Alex (Sims) and I qualified within .026 seconds of each other so I believe we can both figure strongly in tomorrow’s race.”