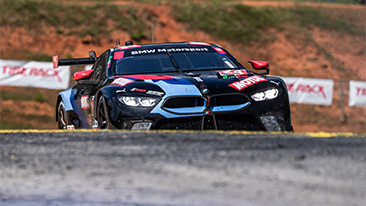 Woodcliff Lake, N.J. – Sept. 23, 2020 . . . The September 27th Acura Sports Car Challenge at Mid-Ohio marks the beginning of the second half of the 2020 IMSA WeatherTech SportsCar Championship and BMW Team RLL’s run for the GTLM class title.
With consecutive podium finishes (P3 – Road America, P2 – VIR, P1, P3 – Road Atlanta) in the last three races BMW Team RLL is looking for a “home field advantage” at the Mid-Ohio Sports Car Course to continue its momentum. Only 60 miles from the team’s base in Hilliard, Ohio the 2.258-mile natural terrain circuit has not yet delivered a win for the team but the team has reached the podium the five times – the best result being a second place finish in 2018 with the BMW M8 GTE driven by Connor De Phillippi and Alexander Sims. Connor De Phillippi and Bruno Spengler celebrated their first victory of the season at Michelin Raceway Road Atlanta three weeks ago and the two co-drivers of the No. 25 BMW M8 GTE now stand third in GTLM class driver points. No. 24 BMW M8 GTE co-drivers John Edwards and Jesse Krohn, third-place finishers at Road Atlanta and two of the four BMW Team RLL quartet that won the 2020 Rolex 24 At Daytona, stand fourth in driver points. In GTLM manufacturer points BMW continues to stand second.
“Any race at Mid-Ohio is a good race even if it has been troublesome for the BMW program over the years to get a victory there,” said Bobby Rahal, Team Principal. “It’s not that we don’t have the car for the circuit – we do. Every race at Mid-Ohio is a challenge.”
Bill Auberlen and Robby Foley stand seventh in GTD class driver points. The winners at VIR two rounds ago had a difficult race at Road Atlanta, finishing 11th in the No. 96 Turner Motorsport BMW M6 GT3. Auberlen, now the leader in all-time IMSA victories with 61, is always strong at Mid-Ohio has four GT class wins since the 2000 season (2004, 2010, 2012 and 2013).
The Acura Sports Car Challenge at Mid-Ohio is scheduled to take the green flag at 2:05 p.m. on Sunday, Sept. 27th and will be broadcast later that day on NBCSN from 11:00 p.m. – 2:00 a.m. ET. Follow us on Twitter @BMWUSARacing for news from the pit box and get live scoring and in-car camera views at IMSA.com.
John Edwards, Driver No. 24 BMW M8 GTE: “Mid-Ohio is the team’s home track so it would be awesome to get a win there for all the guys. The circuit has a good flow, but it’s busy and particularly challenging. The grip changes quickly so we have to be adaptable through the race to get a good result.”
Jesse Krohn, driver No. 24 BMW M8 GTE: “A home race is always important, so we’ll all be extremely focused. Managing the traffic at Mid-Ohio is critical for success and we’ll have to be clever with our strategy. We’ve had a good flow as a team in the last few races and I hope we can keep that up.” Connor De Phillippi, driver No. 25 BMW M8 GTE: “This is essentially our home race and where we achieved our first podium result with the M8 program in 2018. We’re coming into this weekend with a lot of good momentum and I believe we have the tools we need to continue fighting for wins. Speed will be important but strategy at Mid-Ohio is usually a big factor as well. Let’s get to work!”
Bruno Spengler, driver No. 25 BMW M8 GTE: “I have been looking forward to my first visit to Mid-Ohio. I have raced it on iRacing, but it will certainly take a few laps to get up to speed when I drive the real thing. We’ll be racing hard for a home-track victory.”
BMW Group In AmericaBMW of North America, LLC has been present in the United States since 1975. Rolls-Royce Motor Cars NA, LLC began distributing vehicles in 2003. The BMW Group in the United States has grown to include marketing, sales, and financial service organizations for the BMW brand of motor vehicles, including motorcycles, the MINI brand, and Rolls-Royce Motor Cars; Designworks, a strategic design consultancy based in California; technology offices in Silicon Valley and Chicago, and various other operations throughout the country. BMW Manufacturing Co., LLC in South Carolina is the BMW Group global center of competence for BMW X models and manufactures the X3, X4, X5, X6 and X7 Sports Activity Vehicles. The BMW Group sales organization is represented in the U.S. through networks of 349 BMW passenger car and BMW Sports Activity Vehicle centers, 144 BMW motorcycle retailers, 117 MINI passenger car dealers, and 38 Rolls-Royce Motor Car dealers. BMW (US) Holding Corp., the BMW Group’s sales headquarters for North America, is located in Woodcliff Lake, New Jersey.
Rahal Letterman Lanigan RacingBMW’s partner, Rahal Letterman Lanigan Racing, based in Hilliard, Ohio and co-owned by three-time IndyCar Champion and 1986 Indianapolis 500 winner Bobby Rahal, former CBS Late Show host David Letterman and Mi-Jack co-owner Mike Lanigan, has been competing for almost three decades. Prior to the start of their 29th season of competition in 2020, the team had compiled 51 victories, 62 poles, 189 podium finishes, three series championships (1992, 2010, 2011) and claimed an Indianapolis 500 victory (Buddy Rice in 2004). In 2009 the team joined BMW of North America to campaign the new BMW M3 in the American Le Mans Series. The following year the team won both the Manufacturer and Team Championships in the GT category and swept all three GT titles – Manufacturer, Team and Driver – in 2011. In 2012, the team finished second in the Team Championship and third in the Manufacturer Championship and in 2013, the team finished second in the Driver, Team and Manufacturer Championship. Since 2014, BMW Team RLL has competed in the GTLM class of the IMSA WeatherTech SportsCar Championship with a two-car program and has brought their total to 21 wins – including the 2019 and 2020 Rolex 24 At Daytona endurance races, 28 poles and 79 podium finishes as well as a second place finish in the Manufacturer, Team and Driver championships in 2015 and 2017.