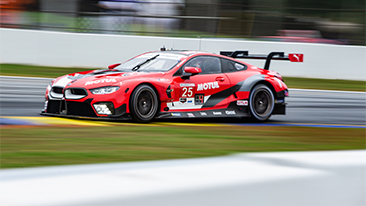 Historically, Laguna Seca has been a strong circuit for BMW from its very first season of IMSA competition in 1975 with a victory by Hans Stuck in a BMW 3.0 CSL to recent BMW Team RLL wins in 2015, 2017 and 2018. Last season, Edwards and Krohn shared a runner-up finish after starting from the pole position in the No. 24 BMW M8 GTE.

Bill Auberlen and Robby Foley, co-drivers of the No. 96 Turner Motorsport BMW M6 GT3, finished seventh at Laguna Seca last year. The duo is looking for their third GTD class victory of the 2020 season. Their most recent win, at the Charlotte Motor Speedway three weeks ago, was Auberlen’s 62nd IMSA victory – the most in IMSA history.

The two-hour-and-forty-minute race is scheduled to take the green flag at 1:05
p.m. local Pacific time. Follow us on Twitter @BMWUSARacing for news from the pit box and get live scoring and in-car camera views at IMSA.com.

John Edwards, driver No. 24 BMW M8 GTE: “Laguna is always a challenge with an extremely low grip surface and high tire degradation, but it has been good to us in the past! We have had some wins and lots of podiums there, so we are hoping to repeat that success this weekend.”

Jesse Krohn, driver No. 24 BMW M8 GTE: “John and I are still in the hunt for second in the championship and, in fact, are not out of the title hunt. We’ll need two very solid weekends and, based on the team’s history there, Laguna Seca gives us a great start.”

Connor De Phillippi, driver No. 25 BMW M8 GTE: “Laguna usually provides an exciting race with fuel strategy versus tire wear. We’ve won there before in the M8 GTE and with the steps we’ve made this year I know we can contend for the win! It will be another new track for Bruno so that will be a challenge, but I know he will be on pace straight away! Having grown up in California, I’m looking forward to a semi-home race again!”

Bruno Spengler, driver No. 25 BMW M8 GTE: “I’ve only been to the State of California once before and I’m very much looking forward to getting to know Laguna Seca. I only know the circuit from time spent on iRacing. I understand the circuit suits our M8 nicely. There will be quite a bit of learning to do and I’m looking forward to it.”