The 2018 BMW Championship Gets Underway at Aronimink Golf Club in Newtown Square, PA with First-Ever Trip to Philadelphia Market. 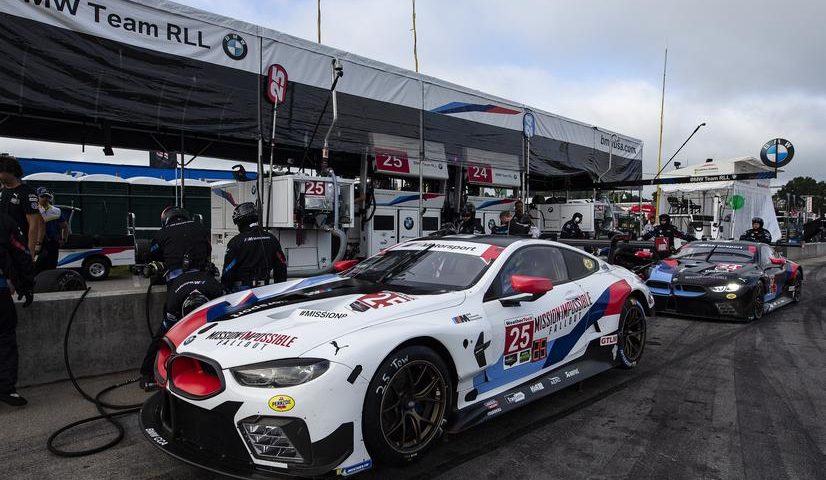 Both racing cars will arrive ready to race in their respective black and white main livery colors after supporting the Mission: Impossible – Fallout movie for the past three races and only two weeks after the North American premiere, at the 2018 Monterey Car Week, of the BMW Concept M8 Gran Coupe alongside the all-new production BMW M850i xDrive Coupe – the first of a new line of BMW 8 Series models.

“As a team or for me as a driver, historically, we have had great success at Laguna Seca,” stated Bobby Rahal, Team Principal. “Last year’s win with John Edwards (and Martin Tomczyk) was a tremendous strategic victory for us and John did a fabulous job getting the maximum mileage that was necessary to realize that strategy. I have to say it was probably one of the most satisfying wins I have ever had as a driver or a team owner so we look forward to returning to Laguna Seca especially given the performance of the BMW M8 GTE at VIR. We hope to be in the hunt for the win again, hopefully without such an aggressive strategy as we utilized last year.”

Connor De Phillippi, driver No. 25 BMW M8 GTE: “Laguna Seca has always had a special place in my racing career since it is the first ever track I drove a race car on. It is one of my top three favorites on our calendar and it definitely is one of the most iconic circuits in North America. Coming off our first win at our last event, I’m looking forward to keeping this momentum rolling and aiming for another one at my second ‘home’ race of the season on California soil.”

Alexander Sims, driver No. 25 BMW M8 GTE: “After we secured the maiden win for the BMW M8 GTE last time out at VIR, I’m hopeful that we can get the car dialed in to the very different characteristics of Laguna Seca. It’s a wonderful circuit that’s fun to drive but will pose plenty of challenges for everyone. We need to work hard to optimize the car and our driving to be on the front foot come race day.”

John Edwards, driver No. 24 BMW M8 GTE: “Laguna Seca has treated me very well in the past! We had a win last year in a black M6 and we’re coming back with a black M8 after a double podium at VIR so we have great momentum. I think we have a good shot at the first win for the No. 24 car this weekend. The GTLM field has been super tight the past few races so it will definitely be an intense fight.”

Jesse Krohn, driver No. 24 BMW M8 GTE: “Laguna Seca is an amazing track that even the non-racing fans know about. The team has done a great job over the last few months and the results started to show at VIR. I am confident we can keep a similar performance level at Laguna Seca and I am looking forward to the weekend.”

Bill Auberlen and Robby Foley will team up in the No. 96 Turner Motorsport BMW M6 GT3 again in the GTD class. In addition to Turner Motorsport in the main event, Saturday’s two-hour Continental Tire SportsCar Challenge Laguna Seca 120 will see BMW represented by three BMW M4 GT4 cars racing in the Grand Sport class; one by BimmerWorld Racing and two by Stephen Cameron Racing. In the Street Tuner class, BimmerWorld Racing drivers Devin Jones and Nick Galante look to continue their strong season. The duo are leading the ST driver championship by 13 points and BMW is a scant one point back from the lead in the ST Manufacturer championship.