Statement Harald Krüger, Chairman of the Board of Management of BMW AG, Conference Call Interim Report to 30 June 2019 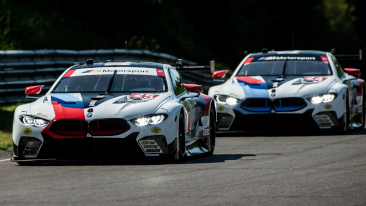 Woodcliff Lake, N.J. – July 31, 2019… The yearly IMSA WeatherTech SportsCar Championship stop at Road America, in Elkhart Lake, Wisconsin, is always special for BMW Team RLL. The 4.0-mile, 14-turn natural terrain road course is Bobby Rahal’s favorite circuit in North America as well as the site of the team’s very first victory with BMW – a win from pole for Bill Auberlen and Joey Hand in 2009. Over the last decade of competition the team has scored two more pole positions, two more victories and five additional podium finishes. Last year, Connor De Phillippe and Alexander Sims looked to be winners until a fuel issue dropped the No. 25 M8 GTE from the lead on the penultimate lap.

With the recent success at the Canadian Tire Motorsport Park, a similar high-speed, flowing, old school circuit, where the team qualified one-two and finished second and fourth the team is ready for a good weekend at Road America.

Tom Blomqvist, competing in his first race at Road America, and Connor De Phillippi will drive the No. 25 BMW M8 GTE and John Edwards and Jesse Krohn will pilot the No. 24 BMW M8 GTE. DePhillippi, in sixth place, remains the top-standing BMW driver in GTLM Driver points. Edwards and Krohn stand seventh and Blomqvist, having missed the season-opening Rolex 24 At Daytona, is ninth.

“I think most folks know that Road America is my favorite circuit in North America,” said Bobby Rahal, Team Principal. “Over the years the track has been very good to us as it has seemingly been designed for a BMW with the track’s long straights and flowing corners – regardless if it is the M3, Z4, M6 or M8. We were very competitive at Mosport (CTMP) so I believe we have to be optimistic about our chances at Road America.”

The green flag for the Road Race Showcase falls at 2:35 p.m. ET (1:35 p.m. local time) on Sunday, August 4th. The two-hour-and-forty-minute race will be broadcast on NBCSN beginning at 6:00 p.m. ET. Follow us on Twitter @BMWUSARacing for news from the pit box and get live scoring and in-car camera views at IMSA.com.

Tom Blomqvist, driver No. 25 BMW M8 GTE: “I’ve been lucky enough to have tested already at Road America earlier in the year and I can tell you it’s one of my favorites! It’s an epic track and one that should suit our package. We’ve been making steady progress in the right direction and we will be aiming for nothing less than a top three finish!”

Connor DePhillippi, driver No. 25 BMW M8 GTE: “Road America is one of the ultimate tracks in North America and it fits the strengths of our M8 GTE perfectly. We came so close to pulling off the victory last year and this coming weekend we have the chance to redeem ourselves. The combination of high and low speed flow is second to none.”

John Edwards, driver No. 24 BMW M8 GTE: “We had a good test at Road America and we had good pace there last year. Although Lime Rock was a struggle for us, the track at Road America should suit our M8 GTE well and I think we have a good shot at winning. The atmosphere in Elkhart Lake is always awesome as it feels like the town is centered around racing. I’m looking forward to being back and hopefully standing on the podium again!”

Jesse Krohn, driver No. 24 BMW M8 GTE: “Road America is my favorite track in the U.S. Fast, long, technical and flowing corners is everything that a driver wants from a race track. Road America also suits our BMW very well.”

BMW’s partner, Rahal Letterman Lanigan Racing, based in Hilliard, Ohio and co-owned by three-time IndyCar Champion and 1986 Indianapolis 500 winner Bobby Rahal, former CBS Late Show host David Letterman and Mi-Jack co-owner Mike Lanigan, has been competing for almost three decades. Prior to the start of their 28thseason of competition in 2019, the team had compiled 45 victories, 56 poles, 171 podium finishes, three series championships (1992, 2010, 2011) and claimed an Indianapolis 500 victory (Buddy Rice in 2004). In 2009 the team joined BMW of North America to campaign the new BMW M3 in the American Le Mans Series. The following year the team won both the Manufacturer and Team Championships in the GT category and swept all three GT titles – Manufacturer, Team and Driver – in 2011. In 2012, the team finished second in the Team Championship and third in the Manufacturer Championship and in 2013, the team finished second in the Driver, Team and Manufacturer Championship. Since 2014, BMW Team RLL has competed in the GTLM class of the IMSA WeatherTech SportsCar Championship with a two car program and has brought their total to 19 wins, 26 poles and 74 podium finishes as well as a second place finish in the Manufacturer, Team and Driver championships in 2015 and 2017. The 2018 debut of the BMW M8 GTE brought two wins, three poles and six podiums of that total.